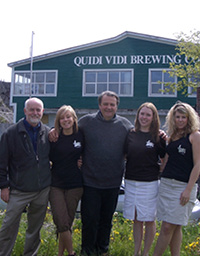 Newfoundland in a bottle

Quidi Vidi Brewery is nestled in a small fishing village on the east coast of St. John’s, N.L., on the eastern-most edge of the continent.

Historically known for fish flakes, curing, and cutting cod fish, the location is now famous for the brewery, in a large green and white fish plant, crafting award-winning beer for the specialty, mainstream and premium market segments made by premium ingredients and pristine water.

“How about I tell you a little story about Quidi Vidi Brewery?” asks David Rees, President and Owner of what has to be the most charming independent brewery on this earth. “When we set up the brewery, our goal was to put a small brewery in Newfoundland that would allow us to make special brands of beer for Newfoundlanders.”

There is a special story behind all nine of Quidi Vidi Brewery’s brands, yet all are linked by the finest ingredients and absence of additives or preservatives. “Did you know that there are 108 chemicals approved by the Canadian Food and Drug Administration for use in beer?” asks Rees. “We don’t use any chemicals, all we use is water, malt hops and yeast and sometimes brewing sugars. We wanted to make beer that didn’t have any preservatives or additives, with the least number of all-natural ingredients that it could possibly have, and to this day, that is the way that we do it.”

Quidi Vidi Breweries has carved out a unique position in the import/premium beer market and the growing thirst for brands that differentiate by way of ingredients, taste and packaging. “They are indeed very keen and astute business people who value and understand quality service,” says Charlotte Jewczyk, Manager of Market Development Travel Trade for Newfoundland and Labrador. “They are driven by an inherent passion for both this place and their distinctive product. They are valued tourism partners with an exceptional product that adds a rich dynamic to the overall visitor experience.”

The Brewery’s first beer—1892—launched in August 1996. Named for the year of the “Great Fire”, this beer commemorates this historic event that “burnt St. John’s to the ground”, destroying over 1,500 buildings. The beer’s label shows one of the last photos taken of downtown St. John’s before the fire. Another nod to history and tradition, Quidi Vidi’s brew master, Roy Ralph, makes 1892 with a recipe that was used around that period of time that existed in St. John’s, malt imported from the U.K. and hops came in from the Czech Republic.” The full-bodied reddish amber ale, 1892 is one of Quidi Vidi Brewery’s top-selling brands 15 years later. “It’s been a great success, that particular brand, for us,” continues Rees.

The 1,000-year anniversary of the Vikings’ landing at L’anse aux Meadows produced the backdrop for the next Quidi Vidi Brewery product, Eric’s Red Cream Ale. Again, absent of any additives or preservatives, this all named smooth cream ale was awarded the silver medal at the prestigious 2001 World Beer Championships in Chicago, a testament to the quality of this distinct Newfoundland beer within the international market. Made with only four pure ingredients under the skilled hand of Ralph, the cream ale is a favourite amongst locals and visitors alike.

This past March, Quidi Vidi Brewery launched a new blue bottle for a beer inspired by the wonderful coastal location of the brewery, premium beer made from glacial water from icebergs—Quidi Vidi Original ‘Iceberg Beer’. “We all know, water makes the difference in beer and iceberg water is the purest water on the face of the earth,” says Rees. “I’ll tell you, the year we launched the Iceberg Beer, an iceberg settled across the harbour here. It was an amazing coincidence,” beams Rees.

Quidi Vidi Brewery’s top-selling beer is Quidi Vidi Light. There is a good reason for its popularity. “Here in Newfoundland, 65 per cent of the beer consumed is four percent alcohol or light beer. That is radically different from other provinces in Canada where only 25 to 30 per cent of the beer consumed is light beer.”
Producing 100,000 dozen beers a year, Rees feels his operating range allows his team to produce a quality craft beer and respond quickly to new ideas, such as customized beer labels for larger groups, or Christmas batches, for instance. Sold across the island of Newfoundland, in Alberta and St. Pierre et Miquelon, Quidi Vidi is exploring options to export the beer to Ontario.

“We love to do things that are associated with our history, that’s what is important to us, to be connected with Newfoundland,” says Rees. Garnering fans from around the world, Quidi Vidi Brewery connects its customers to the beauty and history of Newfoundland and makes a fine brew for, and take my word on this, the world’s most discerning drinkers. Since making a viable company out of the ashes of a cod moratorium, Quidi Vidi Brewery has grown its local market share by developing a strong brand recognition, and building a roster of premium and distinct quality products that appeal to a variety of consumer tastes.