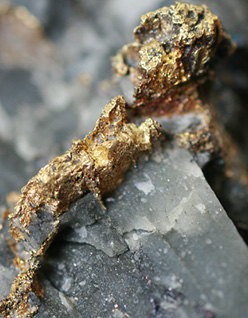 Rambler Metals and Mining, a junior mining company in the general mining sector operating on Newfoundland and Labrador’s Baie Verte Peninsula, is on the verge of actualizing its five-year plan to becoming a copper and gold producer.

Listed on the London Exchange AIM market in 2005 then on the Venture Exchange in 2007, Rambler’s main asset is the Ming Mine, a former copper-gold producing mine on the north eastern coast of the island of Newfoundland.

The Baie Verte region has a proven mining legacy, having provided the largest amount of copper concentrate to the British Empire in the First World War. Over a century ago it was one of the most prolific mining areas in the world for copper, eventually bringing four mines into production and employing 200 people—a reputation that is having resurgence thanks to improved mining technologies and buoyed copper commodity prices.

The Ming Mine was in production between 1972 and 1982, when a property boundary dispute between the K.C. Irving Group-owned Consolidated Rambler Group and BP Selco ceased production on the prodigious underground massive sulphide mine. Unable to foster a deal with the adjacent property owner (BP Selco), Irving Group mined its remaining reserves under their mineral rights, walking away from the project and leaving large portions of the massive sulphite mine unexplored.

In 2004, Rambler acquired the property from Altius Minerals Corporation, a Newfoundland and Labrador based natural resource project generation and royalty business. Altius Minerals’ work led to the consolidation of the property rights, untying the red tape that had previously bound the Ming Mine. Additionally, the commodities market on the whole has changed since 1982, creating a new economic motivation to reopen the mine. Rambler drilled down plunge on the property and found that the massive sulphite continued well beyond the pre-existing boundary. With high grade zones in excess of 3.5 per cent copper, 2.5 grams per tonne gold and 10 grams per tonne silver, a new chapter in the Ming Mine legacy was about to begin.

George Ogilvie is President and CEO of Rambler Metals and Mining. He believes that the Ming Mine is attractive to international producers for its many positive attributes. For one, the Ming Mine is a former copper-gold producing mine, situated in a low risk mining friendly environment. Furthermore, because the mine is located in Newfoundland, the mine has very good infrastructure already in place including roads, access to power, a port, and ample access to fresh water and seaways. “All valuable ingredients which mines require,” he says.

Ming Mine and the Rambler camp is a unique volcanogenic massive sulphide ore deposit because of its varying degrees of gold. Most of the copper zones average 3.5 per cent copper and two grams per tonne of gold, while others can carry gold grades nearer to five grams per tonne. This gold originally reported to the copper concentrate at lower recoveries but with Rambler’s purchase of a gold hydromet 40 kilometres from the site, the company has begun pouring gold doré through one of the mines gold zones with recoveries better than 90 per cent.

“It certainly differentiates Rambler from some of the other junior mining companies because we have the ability to either mine copper with gold and silver in the concentrate or actually go and mine a specific gold zone like we are doing right now,” says Ogilvie.

At the time of our interview, Rambler had marked its fourth gold pour; the initial four pours to date have surpassed 3,500 ounces of gold in doré. Subsequent pours are now scheduled every two weeks. It’s a very fortunate ancillary business for Rambler, whose average daily mill throughput for January was 591 tonnes at an average head grade of 4.4 g/t gold.

This all precedes the copper concentrate production and development of the 1807 zone which is expected to commence in the second quarter of this year. With the 1807 zone reporting grades better than five and seven per cent copper, and today’s copper price averaging above $3.50 per pound, it is timely that Rambler is the newest producer in the country.

The coming months and remainder of 2012 will certainly be an exciting time for Rambler.

“We continue to make good progress towards the production of our first copper concentrates during Q2 2012,” says Ogilvie. “While the early processing of gold through the hydromet has proven successful, and has provided Rambler with its first revenues, the start of copper concentrate production from the 1807 zone is our primary focus. This 1807 zone has returned some very encouraging diamond drill intersections and we are anxious to continue our exploration drilling program to further extend this ore body up and down plunge.”

Rambler’s Ming Copper-Gold mine is now a production reality. While its feasibility study has set a production benchmark, the company has the ability to continue to improve those economics through the better than predicated commodity prices seen today and through the addition of undiscovered tonnes with exploration programs.

The first production target for the company will be the entire massive sulphide horizon; 150 metres below this zone is a large disseminated sulphide described as the lower footwall zone. Rambler has prepared a preliminary economic assessment (PEA), which envisions the company transitioning itself from a high grade, low tonnage producer into a bulk tonnage mining operation. With the lower footwall zone containing more than 250,000 tonnes of copper metal, Rambler is approaching conditions whereby this former international copper region can be reinvigorated.

“Our small operation has the potential to grow into something much larger, all the while protecting its core assets of copper and gold production through the concentrator and hydomet facilities,” says Peter Mercer, Vice-President of Corporate Development. “The footwall zone provides mine longevity at high production throughputs when copper prices are high, like they are today. For times of volatile markets, the value of the massive sulphide horizon can be maximized to survive the business before the next up cycle.”

While there are many junior exploration companies with great prospects, Rambler is one of the few who has proven it can move a project from exploration, through resource and reserve estimates, feasibility studies, environmental permitting, construction and finally to production.

“We have a strong understanding for exploring mineral deposits as well as experience in developing a viable operation,” says Ogilvie, “which puts us ahead of the pack.”

Once Rambler’s PEA is released, the company may consider a partnership or consortium to assist with the financing and debt to equity split pertaining to the lower footwall zone. This next phase of the project will require more than $200 million in capital over the next five years, and while the company sees a portion of these costs being generated from the ongoing copper and gold production, the right partner will be important to elevate Rambler into the international scene.

On the edge of the North American continent, Rambler Metals and Mining is on the verge of a very prosperous new era for the Baie Verte region. The company is on track to become a leading explorer and resource developer in Atlantic Canada with a team that has a track record to back it up.

“When you have leadership with production experience,” states Ogilvie, “you are able to communicate that through to the workforce, and subsequently we have developed a culture that is very results driven.”