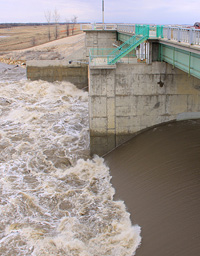 The Red River Valley and Winnipeg for decades has been an area prone to floods. Dating back to 1950, Winnipeg had a number of floods that forced residents to evacuate their homes, offices, schools and hospitals. The result was millions of dollars worth of damage. In 1997, Manitoba had a flood known as the “Flood of the Century”, forcing the evacuation of many in the Red River Valley. According to the Red River Valley Expansion Project website, the flood “came close to reaching the floodway’s capacity and threatening the protection of Winnipeg. In the end, the Red River Floodway did protect Winnipeg and saved the city from the devastation that was experienced by our American neighbours in Grand Forks, N.D.”

After this flood, the International Joint Commission (IJC) reviewed flood protection measures. During this review the IJC found that the risk of failure within Winnipeg’s flood protection infrastructure was high. “As a result, the IJC recommended that to ensure public safety, the city, province and Canadian government focus immediate action on designing and implementing measures to protect Winnipeg,” states the Red River Valley Expansion Project website. As a result, the government decided to expand the Red River Floodway in order to help with any further occurrences.

Ronuk Modha, Director of Communications, explains that the project’s aim was to take the floodway from a 1-in-100 year protection to a 1-in-700 year flood protection. He says, “In Canada and Manitoba the governments have invested an additional $130 million for flood protection in the valley.”

The expansion of the floodway will improve the life of residents, increase food security and improve flood protection. The expansion is complex and involves many important elements from the construction and redesign of bridges and highways, protection of water quality and modifications to sewer lines and hydro.

Public involvement and the environment

Public involvement in the project is of utmost importance in the environmental assessment. Before construction started, the Manitoba Floodway Authority (MFA) required “preparation of an independent Environmental Impact Assessment, a license under the provincial Environmental Act, and federal environmental authorization,” according to its website.

There is also the Red River Floodway Act passed by the Province of Manitoba, designed to give compensation for artificial spring flooding because of the Red River. The MFA passed the Floodway Authority Act, created to outline the responsibilities of the MFA.

Two large cylinders in the floodway that are hydraulically driven are being replaced to protect the environment. “They used to hold petroleum hydraulic fluid and we are replacing those with vegetable oil so if there is damage to them, vegetable oil will leak not petroleum, which is much better for the environment,” says Modha.

The floodway project costs $665 million and is one of the biggest projects in Manitoba’s history. “We are very proud to have been able to bring this project on time and on budget,” says Modha. The project has also managed to redesign the floodway so that if there was a major flood then the main transportation systems would remain open.

The project is an extremely important one for the community and Modha says, “The level of confidence is considerably better. People in Winnipeg are now confident that the city is prepared should a flood occur.” Within this new, extensive and state-of-the-art expansion of the Red River Valley, the community can now rest easy that its livelihood—homes, lives and families—are ensured safety in case of floods. Overall, it is an outstanding and unprecedented project for Winnipeg. Modha adds, “We think the men and women who worked on this project should be very proud of themselves.”