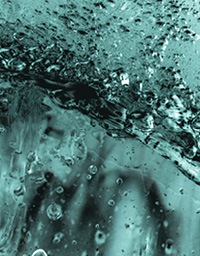 Over the years, the company quickly moved toward a class of technology known as Drain Water Heat Recovery, dubbed as a “simple, effective, practical and proven solution”. It is a technology that, quite simply, uses outgoing warm drain water to preheat incoming cold fresh water. In other words, the RenewABILITY Power-Pipe captures and reuses heat energy from warm water that is going down the drain. An industry leader, the maintenance-free Power-Pipe heat exchanger contains no moving parts by taking advantage of the falling drain water on one side and city water pressure on the fresh water side. Ultimately, an average size Power-Pipe can reduce water heating costs by as much as 35 percent, an energy level that already accounts for, on average, 20 percent of a households’ annual energy consumption. It is also used and works very well in multi-residential buildings, commercial buildings and industrial processes.

The Power-Pipe improves overall energy efficiency in buildings, reduces emissions of greenhouse gases and is a great investment, with return on investments of 10 to 50 percent for single residential and 20 percent to 200 percent for all other applications. Statistically, 80 to 90 percent of the heat energy in domestic hot water is remaining by the time it leaves a building.

In speaking with Gerald Van Decker, CEO and Founder of RenewABILITY Energy Inc., he emphasized that the company is expecting growth in several markets in the years to come, including the residential, industrial, commercial, and institutional sectors, with RenewABILITY Energy already developing distributing networks in the United States, Canada, and Europe. It is the belief of RenewABILITY Energy that with its intellectual property and extensive success, it is “uniquely positioned” for global growth.

Accordingly, there are three classes of products: residential series, commercial series, and multiple-pipe systems for custom engineered applications such as large commercial and industrial. These classes of product allow for the low pressure loss and high efficiency to suite specific flow requirements from single home showers to thousands of gallons per minute.

In terms of the product’s research and development, this particular system is currently available in two-inch, three-inch, four-inch, and six-inch diameters with lengths anywhere from two-feet to 10-feet, in six-inch increments. This wide range allow for the maximum performance for a given application. The Power-Pipe single residential design has been refined over the years to its current model, though the company always strives for continuous innovation. Currently, the Power-Pipe is supplied in Canada by Home Depot and Sears.

However, it doesn’t cause water flow problems, while the first generation unit does.” The Power-Pipe’s multiple parallel coil design means that one doesn’t have to choose between having either high pressure loss or low efficiency. You get both very low pressure loss and high efficiency for every application.

All Drain Water Heat Recovery units need to be double-wall vented to be safe for potable or drinking waters, requiring two walls of separation. All three types of units on the market currently satisfy this requirement.

The Power-Pipe is economically worthwhile in most any building because of its great ROIs. Environmentally speaking, the Power-Pipe is also very worthwhile because of the huge savings in greenhouse gas emissions, contributing significantly toward the LEED certification program. As such, the company has seen fast growth in new construction in recent years, despite the economic decline. RenewABILITY Energy focuses on cost effectiveness savings. The company projects that it will be well over $100 million per year in sales in North America—an amount it feels is very achievable. Manufacturing and satellite facilities across North America and Europe is another objective of the company. There is no plan for centralization.

Strict “Energy Performance-Based” building codes have been in Europe for well over 14 years and are coming to North America, starting in Ontario in 2012.

According to Van Decker, the company’s objective is to continue to develop recognition in these energy performance-based building codes in Europe and North America as they emerge, plus do the same for existing certification programs like LEED and EnergyStar for new homes. The emphasis in the United States has been to educate architects, engineers, developers and building owners about the value of the Power-Pipe for their buildings whether or not they seek LEED certification.

“My professional goal has always been to make a difference. This is one of the reasons why we are a national partner with Habitat for Humanity Canada. When I first learned about climate change, I decided that my career would focus on developing systems and services to help people and business save energy,” said Van Decker. “I quickly realized that it is imperative to focus on offering cost-effective products and services because there is always a market to save money and by being cost-effective, a solution is also usually more environmentally-effective. Fundamentally, despite my goal, you still need to be profitable as well, otherwise you’ll be out of business making it more difficult to make a difference.”