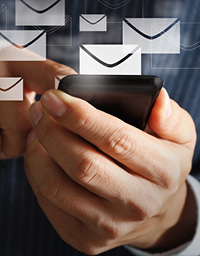 A burgeoning trend among worldwide companies that eliminates or limits internal email to employees is a misguided strategy, based on research released by The Grossman Group, a communications consultancy, and LCWA Research Group.

Results of the 2012 Work-Related Email Perception Study, “Enough Already! Stop Bad Email” show that while middle managers typically spend 2.5 work weeks a year on irrelevant email, they don’t want their ability to use email taken away or interrupted at any time of the day or night.

They do, however, want policies that could help reduce the overwhelming volume of irrelevant email. Findings reveal:

Executives (84 per cent), middle managers (83 per cent), and employees (77 per cent) overwhelmingly agree email is an effective and necessary communication tool.

Only 8 per cent of executives, 15 per cent of middle managers, and 11 per cent of employees said limiting email during normal business hours would be very effective.

Only 11 per cent of executives, 20 per cent of middle managers and 13 per cent of employees said limiting email outside normal business hours would be very effective.

Only 3 per cent of executives, 12 per cent of middle managers, and 7 per cent of employees said eliminating email outside normal business hours would be very effective.

“We’ve seen companies around the world experimenting with email black-outs or time-outs,” said David Grossman, communication expert, author, founder and CEO, The Grossman Group. “However, our research reveals that’s not the most effective approach. We know employees are overloaded by their inboxes and it’s causing them stress, yet our research shows it is email misbehaviours that need to be addressed.”

Respondents rated some reasons why they want flexibility to access work-related email after hours, including:

“The goal of this research was to better understand how a cross-section of Corporate America feels about email in their workplace and how they use it,” said Greg Gordon, senior vice president, research and strategy, LCWA Research Group.

Respondents indicated they don’t want access to email to be compromised, but they would like to see many emails that amount to spam get knocked to the curb. Sixty-one per cent of senior executives and 55 per cent of middle managers say email policies would be very effective and a welcome addition in their organization.