Home | Features | May 12 | Resurgence of the Entrepreneurial Dream

Resurgence of the Entrepreneurial Dream 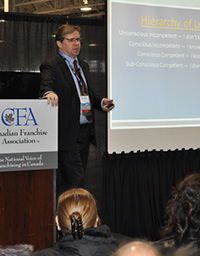 So why the big increase? While several theories abound, this writer believes that people are becoming better educated about the true financial requirements required to sustain a happy retirement lifestyle and thus are seeking nontraditional strategies to create consistent and sustainable long-term income, and are taking firm action to achieve their goals. Self-employment through franchising is one of the best nontraditional strategies… we’ll address why momentarily.

Because we are living longer, we have to make sure our retirement nest egg consisting us for much longer periods of time. Unfortunately though, too many people have lost faith in the “Big 3” traditional long-term wealth creation strategies that used to fund our long-term financial goals. The “Big 3” are :

Stable financial markets (way too much volatility due to global economic conditions);

Long term corporate jobs (if you’ve got one, keep it because all indicators that your next job will only be for 2 – 3 years; corporate employment is quickly emerging as the realm of “The Disposable Employee”)

We all know that over the past few years some of our core industries have been decimated and many thousands of jobs have been lost… due to downsizing, US parent companies “bringing jobs back home”, downsizing, overseas offshoring, etc.  While our economy is gaining momentum and companies should be doing more hiring, many still are not; instead they are continuing to operate with fewer staff – often leading to overworked, overstressed, non-motivated and underperforming employees.  Quite simply, today’s corporate employee is expected to do more, for less, with less, while being paid the same as they were prior to the heaping on of extra responsibilities; a 60-hour week used to be considered a long week for a corporate executive, but now that’s often the minimum amount of time that’s expected, even further exacerbating stress created from lack of work/life balance. Couple this with one of the biggest stressors in the workforce today – the fear of job loss and resulting financial insecurity, and you get this unpleasant phenomenon: “The Disposable Employee”!

Let’s face the harsh reality – there are a lot more job seekers on the street so competition is tough; when companies do hire, they are often hiring for short to mid-term contracts (6-12 months, two years if you’re fortunate). I’ve talked to hundreds displaced corporate folks who are trying to figure out where the next job might be; most feel that long-term jobs are becoming a thing of the past, and a lot of the jobs that are available are at lower levels of responsibility and compensation. This “Disposable Employee” culture is something I’m hearing about more and more; it’s not a pleasant phenomenon in the Canadian corporate employment world.  Unfortunately, too many people are “settling” for a lesser deal, just to get supposed job security.

The good news is that people don’t have to “settle” for a lesser deal.  There is a marked increase in the number of people who are now turning to self-employment as a means to replace the lifestyle they had in the corporate world. The three primary options are:

While each of these business ownership options has pros and cons and varying levels of risk, this article will focus on franchising because when done right, franchising is one of the best strategies to significantly mitigate risk. Before we go too far, let’s first state clearly that franchising and/or other self-employment isn’t right for everyone, and even for those who it IS right for, a number of other factors have to be considered and researched… thoroughly prior to deciding on launching your business!

You’re probably thinking something like “franchises – is he crazy! I don’t want to invest a ton of money to buy myself a long hours, low paying job! ”

Like any good business model, franchising has evolved significantly. While most people still think of franchising as bricks and mortar food, retail or automotive, costing from $300,000 to $1 million-plus; the great news is that this perception is often incorrect! Franchising today is way more than food & retail – you might be surprised to learn that there are a seemingly endless and overwhelming number of concepts to choose from – over 1,200 concepts in Canada; in over 50 different industries!

A strong caution though – just because it’s franchised, it doesn’t mean it’s good, it just means it’s been duplicated. I would run, not walk, run from numerous franchise concepts in Canada today – they either have the wrong trends behind them, poor systems, inexperienced leadership, or other critical flaws.  Just like buying a home for the first time, you don’t go out and drive around just looking at open houses then buy the house you like best; instead, you seek professional help of a real estate professional. When buying a franchise, the same strategy should apply because there are simply way too many choices to buy a business without professional assistance.

The fastest-growing segments of franchising that we see are business-to-business and business-to-consumer services; these businesses typically require far lower initial investment levels (often only between $50,000 and $150,000) and are usually operated from a small office or home office. This means that because these businesses don’t have the large fixed operational costs that location-based businesses do, more profit per revenue dollar can be generated from them. Further, service-based businesses usually require the same types of skill sets to run the business that many people have developed throughout their corporate careers, and in many cases offer similar hours to the corporate lifestyle.

So franchising is way more than food and retail; successful franchise concepts emerge from well-established industries by creating consolidation. Good franchisors wait until there’s a proven demand for a product or service, then they bring executive leadership, sophisticated operating systems and processes, combined experiences of all the franchisees, consolidated marketing, etc. By bringing these sophisticated systems and strategies to the business, good franchisors consistently outperform their independent, unsophisticated, competitors.

So what is a franchise? Quite simply it is the creation of a specialized distribution channel. It is also a business model designed to gain and keep disproportionate market share, in other words to build brand entity and capture market dominance. There are 78,000 operating franchised units that generate over $90 billion of business every year (about 10 per cent of Canada’s Gross Domestic Product) – but only 7.8 per cent of all Canadian small businesses are franchised. This is where it gets really interesting – that 7.8 per cent captures 33 per cent of the total dollars generated by ALL of the small businesses in Canada. This is what we mean by disproportionate market share!

Buying into a well-run franchise system also mitigates risk.  Consider this – nearly 50 per cent of all independent small businesses fail after five years (Industry Canada 2011); while no hard franchise industry data is available, it’s estimated that only 15% of franchisees fail after five years;  FranNet’s track record of a 90 per cent success rate over the same five years beats industry averages (based on a 73 per cent franchisor sample size). Think of the correlation here – Franchising, when done correctly, significantly mitigates risk.

Let’s expand on why franchising works:  as we’ve already stated, franchising is a proven and systematic approach to starting and staying in business.

You get the consolidated experience of the franchisor and of all the franchisees, so you are benefiting from an exponential learning curve.

Because you’re working with proven systems, it’s that much more simple to run, and you got initial training and ongoing support to help you capitalize on opportunity and avoid mistakes depending on the business there might be some name recognition, but you’ve got the sales, marketing and other  operating systems to help you launch faster and achieve higher levels of success than the same independent, non-franchised business and most importantly, in good franchise systems, there’s a culture of teamwork amongst franchisor and the franchisees. Everybody’s on the same team so there’s lots of support, and your fellow franchisees are the ones who are doing what you’ll be doing day in and day out, and when you need help often times, it’s the other franchisees who have the answers.

In other words, with a well-run franchise system, you’re focused on sailing a well-designed boat, in previously charted waters. Conversely, with a start-from-scratch business, you’re trying to figure out what boat design to use and how to build it, while you’re already out on the water… SIGNIFICANTLY more risky.

One of the most important determinants to success is how well-matched the owner’s skills and abilities are to the core roles that re required to drive success in the business they buy. Regardless of what franchise concept you’re considering, investigate before investing! Investigate your own interests first; take the time to figure out where your skills, abilities and experiences are best leveraged. Take the time to figure out what you’re good at, what you’re not good at, what you like to do, what you don’t like to do, etc., Investigate your market; your competition, etc. Also, seek professional assistance – from an experienced franchise matchmaking professional, from a franchise lawyer, and from a chartered accountant who works with franchised businesses – before you buy.

Gary Prenevost enjoys over 20 years of experience in the franchise industry and is one of North America’s most successful franchise matchmakers. He sits on the Board of Directors of the Canadian Franchise Association and the Association of Career Professionals International, Toronto. Gary can be reached at
www.frannet.com/gprenevost