Rim back in motion 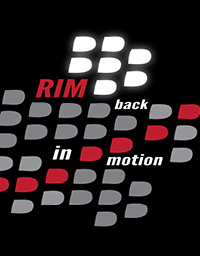 It seemed like Research in Motion Inc. (RIM) was going to catch a break that day. Apple, in a rare misstep, drew criticism and disappointment from fans expecting the release of the iPhone 5, but who instead got the iPhone 4S. Looking to be blown away by a great surprise, fans and investors sent the stock down four per cent, and left newly appointed CEO Tim Cook looking a little shaky. A lackluster product debut, Internet forums filled with criticism, falling stocks; RIM’s shoe was on the other foot, and for a few hours, the heat was not solely on RIM.

It was a fleeting moment, as we now all know. The next morning, any remnants of Apple disappointment was quelled with the untimely passing of Apple co-founder, Steve Jobs, whose contributions to the 21st century were lauded for weeks.

Compared to an off-day of its biggest competitor in the smartphone industry, Waterloo-based RIM has had a difficult two years. In July, the company terminated 2,000 jobs, about 11 per cent of its workforce worldwide. First quarter profits from this year were down 10 per cent, and market share fell an additional five per cent.

Missteps followed slips ups. There with a cringe-worthy, boggled PlayBook launch, which failed to make any impact, leaving RIM employees to watch Apple’s runaway iPad and iPad 2 blow them out of the water.

Then there were troubles with the overseas markets when Saudi Arabia, the UAE and other countries threatened to shut down BlackBerry Messenger (BBM) for failing to comply with security laws. There were production delays that botched any momentum for product launches, all the while competitors like Android and especially Apple rolled out products seamlessly, eating away at the market.

The idea of dropping one of the CEOs (invariably Jim Balsillie, who was preoccupied with buying an NHL team for most of the last two years) had been thrown around in the public sphere. Northern Securities analyst Sameet Kanade asked RIM to consider dropping Balsillie as a co-CEO, among other recommendations. An open letter to RIM, authored by a high-ranking employee, said, “To avoid this death, perhaps it is time to seriously consider a new, fresh thinking, experienced CEO. There is no shame in no longer being a CEO.”

Perhaps most telling was a boost in stock prices amidst rumours of a strategic consultant being brought in. It shows investors are confident in BlackBerry products, less so in the current management.

Paul Hodgson, senior research associate for GMI, a governance ratings firm, summed up investor frustration. “They are supposed to be the representatives of shareholders and they’re not doing a very good job of representing shareholders’ interests.”

Throughout, little was heard from co-founders Mike Lazaridis and Balsillie, but much was heard about them. RIM has a unique corporate structure to say the least. Considered “top-heavy”, Lazaridis and Balsillie are co-CEOs, a strategy that has taken a lot of heat in light of strategic missteps of past months. Does a shared CEO position lack a singular vision? Can two generals lead an army?

Marketing strategy to quell the storm was lacking, if it existed. As of late, the media perception of RIM is of a once-mighty company disintegrating amidst competitors such as Apple and Android, despite the fact that RIM has, in fact, quadrupled its size in five years, still taken in close to $700 million in the last quarter, and is experiencing substantial international growth.

In June, the CEOs did address some of the concerns that have been expressed surrounding the executive management structure at RIM, specifically, the joint nature of its leadership. “Mike [Lazaridis] and I have been partners in this business for almost 20 years, and during that time RIM has grown to $20 billion in annual revenue. We are currently approaching the tail end of a significant transition in our business, that, frankly, few companies would have survived. But we have. And I believe, and I think Mike would agree, that neither of us could have taken RIM this far alone.”

“I agree with Jim’s comments,” Lazaridis added. “Our co-CEO arrangement is what led to RIM’s success over the past two decades.”

Don’t sell your stocks just yet

Is the media being too quick to give RIM the RIP? We think so. There is no denying RIM deserved the criticism it received, but a wakeup call has been sounded, one that we predict will show dividends as early as first quarter 2012. We spoke to RIM Managing Director Rick Costanzo for some perspective on RIM’s position.

“I’ve been here for 12 years, having joined the company about a week before the BlackBerry was officially launched in 1999. For us, this year is very much about going and managing a transition period. You have to keep in mind BlackBerry has gone through a dramatic period of growth.”

“I wouldn’t characterize this as some sort of huge negative period by any stretch of the imagination,” he continues. “I recall a correction we had to take in 2003 and 2004 and frankly the company came out of it that much stronger. There are some similarities [between now and 2003] to the degree of people’s determination to put whatever issues have been with us over the past squarely behind us and stay focused on the future. We have a focused determination in terms of getting back to what we know which is unparalleled growth and success.”

Cognizant of RIM competition, the iPhone, Android phones, Google phones, Costanzo says, “There was always something around the corner that was going to kill us. At the end of the day, if you focus on the market, focus on your customers, deliver upon your promises, usually the rest looks after itself. RIM has a tremendous history of doing that.”

Costanzo contends, “It’s taken us a little longer than we would have liked to bring out some of the BlackBerry products, but we’re happy now that they are actually in market they have gone on to a phenomenal start.”

The BlackBerry 7 is a major part of RIM’s “transition”, as it its QNX software, acquired in late October, which RIM says will make a very impressive contribution to smartphone technology.

“QNX is strong because it has the ability to squeeze as much processing power out of the environment as humanly possible. We have publically stated our intention in utilizing QNX software and rolling that out across handsets as well, that bodes extremely well for us also,” says Costanzo.

“You have to take a look at what we’ve done with BlackBerry 7, that very much reflects our plan. We don’t want to try to copy other platforms. We want to be true to ourselves. The reality is frankly that is the strategy that serves us extra well. If you take a look at the 9900 BlackBerry, it mirrors what our strategy actually is. It is a highly aspirational offering. Everything from the brushed metal finish, the high definition capabilities of the screen, the multimedia capabilities, high web fidelity, best browsing in the industry, we have a ton of leading-edge technology that is super easy to use. Discovering these capabilities is as easy as hitting the touch screen on the product.”

Will RIM see a rebound in sales based on the BlackBerry 7? “Without a shadow of a doubt,” says Costanzo.

Is BBM the White Knight?

Days after speaking to Costanzo, RIM suffered another blow, a major outage of its BBM services rolled over Europe, the Middle East, Africa, India, and North America. And yet, it might still be worth holding on to those RIM shares. This BBM outage lasted four days and illustrated how important the service is to people who rely on it for personal and business applications.

“I have to go online to check my messages like a caveman,” opined my colleague Cory Wilkins during the outage.

What RIM has on its hands is products that people love but a lack of marketing strategy and a refusal for the most part for Balsillie or Lazaridis to acknowledge any sort of difficulty, at least publically.

The BBM outage may be good for RIM in the long run for two reasons. One, it reinforced how integral the service is for BlackBerry users. BBM is the stronghold of the BlackBerry platform, more so than its operating systems, its battery life, privacy—all the things Lazaridis promotes.

“BBM has been a huge catalyst for us in terms of driving growth for us,” says Costanzo. BBM fans have taken to the service in such force that the outage will not do much to dent enthusiasm for the product. Here is where RIM has an opportunity to really capitalize on a feature that is so loved.

@KimKardashian. “BlackBerry is the best! People please agree w[ith] me! Iphone’s [sic] are so hard to type.”

Mirka Federer is almost as well known in sports circles for watching her BlackBerry than her famous husband Roger during his matches. Politically, President Barack Obama’s love for his BlackBerry is well documented, and he was quoted as saying before his inaugural address, “I’m still clinging to my BlackBerry.

They’re going to pry it out of my hands.” (In the end, Obama got his way, and still uses his BlackBerry, winning his own personal Battle of Waterloo.)
The BBM outage made nightly news around the world for days, and while it was bad publicity, it should serve as a clear indication of what its customers value in its products and a motivating factor to better articulate how it will continue to deliver on those expectations.

Secondly, the BBM outage garnered a personal reply from Lazaridis, who posted a YouTube video addressing the issues, acknowledging the inconvenience.

Perhaps this is part of a newer, friendly RIM CEO, one who engages more with its investors, speaks openly with its customers and acknowledges its deficiencies, rather than stand by silently, allowing media and investor speculation to run amok.

More leadership and an articulated media campaign will go far in helping RIM continue to turn the corner.

“The general mood at RIM right now is a determination to turn the page and absolute positive momentum and we are very comfortable relative to our competitive positioning. We are a profitable company, growing 40 per cent year over year and with 70 million subscribers and climbing. We have just launched the biggest portfolio of devices in the company’s history in one fell swoop, delivering unparalleled performance on the BlackBerry platform and rebounding nicely.”

It’s too early to count out Canada’s most innovative company. With 4 billion cell phones out there in the world today, only 25 to 30 per cent of which are smartphones, there is still 70 per cent of the market up for grabs.

“There are tremendous opportunities in front of us,” says Costanzo. “The question is how do we best approach them?”