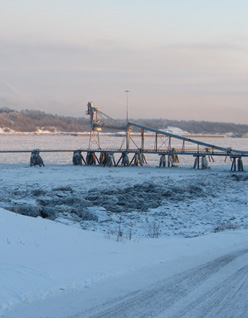 After their success in Mozambique coal, the Riversdale team is intent on realising another triumph – this time in Alaska.

Riversdale Resources’ philosophy is the same as the last time CBJ caught up with the team, which saw its original operation, Riversdale Mining, acquired by Rio Tinto for A$4 billion.

Summing up that philosophy is Steve Mallyon, managing director: “Go hard or go home”. The figures certainly back up the claim of going big; in 2004, $1,000 invested in Riversdale Mining grew to $82,500 when it was acquired by Rio Tinto in 2011.

Still, Alaska and Mozambique seem like quite different prospects.

“It is a different operating environment,” says Mallyon. “But to some extent all of the systems, people and protocols are identical to what we had in the original Riversdale Mining. And once again, it is a multi-seam, coking coal basin that we are pursuing.”

He admits there is one big difference, an intentional one. That is the availability of infrastructure in Alaska, something that was woefully missing in Mozambique and an aspect of the project that the Riversdale team admit was the toughest, and most expensive, in their African experience.

By contrast, the Chickaloon project in Alaska has a long history of coal mining and had been mined from 1913 to 1922, when the US Navy focused on high quality coking coal for their Pacific fleets. In 1917, a rail link was developed to service the mines. Operations ceased when petroleum began to gain greater significance after discoveries in California and later in Alaska.

“As a result of that work, as well as additional work by a number of US-based companies in the 1960s and a small development project undertaken by a private group in the 1980s in the area, we had the confidence to go down the path of development. The Riversdale model has not changed, we are not really a greenfield explorer, we go into known coal domains with good quality coal, but the difference here is that we were sensitive about access to related infrastructure,” Mallyon says.

That includes the deep water Port MacKenzie, which is well-placed as a delivery point to natural markets for the product in Japan, South Korea and Taiwan.

There is all-year round shipping and the port is located about 120km from Chickaloon on Glenn highway.

The Glenn highway runs through the centre of the state and through Anchorage, the biggest city in Alaska with a population of about 300,000 and connects with Chickaloon. Riversdale believes the Port Authority is targeting between 2 and 3 million tonnes per year (Mt/y) of coal exports from existing infrastructure and rail and dock upgrades are being considered for the future.

The Chickaloon region’s coal is bounded by two river systems, the Chickaloon and King rivers, and the land is amenable to a number of open pit and underground development. Riversdale has acquired about 40.5km2 of land in the Matanuska valley, leased from the Alaska Mental Health Trust (AMHT), which was awarded the land as part of legislation in order to generate funds to support mental health programmes.

Riversdale has a 10-year lease with extension by production and exclusive rights to coal in a US$3million deal. In addition, royalties are payable to AMHT with no additional state royalties payable, though this does not reduce Riversdale’s requirements to comply with the Department of Natural Resources or other regulations.

“The relationship with AMHT is a unique arrangement and from our perspective a very satisfying one. Every dollar that we spend in acquiring the land lease and in paying royalties will benefit the hospital system in Alaska, which looks to us to be quite underfunded. We are not there to build a five or ten year-life project, we are targeting between 20 and 25 year production life, so the royalty base will grow as we develop it and the benefit goes directly to the hospital system,” Mallyon explains.

The area is also home to a small population at Chickaloon village, with about 350 landholders and about half that for people living in the area. In addition there is a native community living nearby. At this stage, the company is involved in a community engagement programme, giving presentations at local councils as well as sponsoring community events. The main concerns coming from the community are around the environment, as a number of people use the area for hunting, fishing and gaming. A baseline study for environmental work has commenced to address issues such as potential impacts on surface and ground water quality and flow, noise, dust, cultural resources, vegetation, soil, wetlands, recreational activities, wildlife and social impacts.

Mallyon notes, however, that the lease has been effectively dedicated for mining since the 1920s.

“It is an exciting exploration environment because Alaska has really developed on the back of the oil and gas industry. There are a number of sedimentary basins across Alaska from the south of Anchorage to the northwest slope where the major oil producing centre is. Coal has been widely overlooked by the oil majors, yet groups such as BHB Billiton have developed a sizeable resource on the northwest slope. Our plan over the next year or two is to investigate a number of coking coal opportunities throughout Alaska, as well as accumulate a larger footprint in the valley we are in,” says Mallyon.

The company’s president in Alaska is associated with the original Riversdale team, Russell Dann. He was a former Regional Director of the Department of Employment, Economic Development and Innovation in the Queensland Government’s Mining and Energy agency and, prior to that, was the Latin America, Philippine and USA exploration manager for RGC (Renison Goldfields Consolidated – part of the former Hanson Plc group) .

“There are a series of igneous intrusions in the area and that appears to be the primary reason why that specific location has coking coal. When we take some of the historical coking coal analyses and calibrate those against modern specifications for coking coal, we are very happy with those results. It certainly gives us the indication and encouragement that we have the potential for a very good quality coking coal,” Dann says.

Surface mapping has identified 21 outcrops including two coal zones of between 6 and 9 metres wide.

“A key element for coking coal is that it has to have a high calorific value, right now this resource could be a low volatile bituminous coal and the indications we have for ash at the moment are relatively low but we may need to wash that coal. We don’t have enough information at this point in time within the Chickaloon coal lease itself and that is the purpose of the forthcoming drilling campaign…We would like to drill holes into sections right through that full thickness of the coal seams and understand exactly how thick those seams are and how the quality varies between them,” Dann says.

As the company moves towards development, Dann explains that Riversdale is trying to combine teams of local Alaskan knowledge and experience with the more global technical capability of groups it has worked with in the past.

Riversdale is working with Anchorage-based Alaska Earth Sciences to tap into the group’s coal expertise and experience in community engagement.

Having just completed an A$20 million capital raising effort with institutional and high net worth investors out of Europe, Asia and Australia, Riversdale believes it is in a strong position to proceed with work on the ground in Alaska, but also to potentially look at additional opportunities for the company in Australia and North America, says Anthony Martin, chief financial officer at Riversdale.

“The current intention is to look at an IPO during 2013 as the next capital raising effort, but that is dependent on markets at the time. We feel the company is in a strong position to advance the project for the next couple of years with existing funds and we are unlikely to be in a position where we are beholden to any market to try and get additional money,” Martin notes.

Though he says that it is still early days to talk about capital expenditure of the project, Martin adds that compared to other potential coal developments globally, due to the proximity of rail and port infrastructure and potentially a significant reduction in the size of plant facilities based on historical coal quality and yield results, capex may “comparatively sit quite well in the coal development world”.