Robex are excited to announce significant near surface gold intersects at the Mansounia Central Deposit, 3km south of the new Kiniero plant location at the Kiniero Gold Project in Guinea. The Robex geochemical gold-in-soil results have confirmed that the recently discovered Sabali South deposit (announced 24 May 2022) forms an integral part of the Kiniero Gold Mine restart. This now represents a part of a much larger shear mineralised corridor, termed the “Sabali-Mansounia” Corridor.

Andrew de Klerk, Exploration Manager for Robex said: “These world class shallow intersects demonstrate the significant upside resource potential within close proximity of the new Kiniero process plant. A cumulative ~8km strike length of the “Sabali-Mansounia” Corridor represents one of the largest contiguous zones of gold mineralisation within the southern Siguiri Basin. We will further delineate this exciting deposit in early 2023.”

Robex conducted an extensive bulk leach extractable gold (BLEG) in soil geochemistry campaign, initially across the Kiniero license area, and then subsequently across the Mansounia license area. This reconnaissance targeting exploration campaign has remained ongoing since this date, running concurrently with the various technical mining, and drilling related studies that are actively underway to restart the Kiniero Gold Mine. The BLEG analytical technique has proven to be a very effective technique for accurately measuring fine grained gold content in the soils of this portion of the southern Siguiri Basin and has helped delineate drilling targets.

BLEG results to date have delivered some highly encouraging anomalies that define the Sabali-Mansounia Corridor. Drilling results from Sabali South have demonstrated a clear relationship between the BLEG gold-in-soil and the airborne magnetics, intrusives, the inferred alteration footprint, and the underlying confirmed structures. Structural interpretation of these combined datasets has yielded encouraging results providing additional structural understanding to the broader mineralised Sabali-Mansounia Corridor.

Based on this proven inter-relationship between the BLEG results and the drilling results, Robex decided to execute an RC reconnaissance and verification exploration drilling campaign targeting the Mansounia Central deposit that had been historically drilled by Gold Fields Limited (RAB scout drilling, 2003 to 2005) and Burey Gold Limited (RC and DD drilling, 2005 to 2012). In addition, the Mansounia Central deposit hosts the active Wadal Minji artisanal gold mine at which Robex has completed preliminary mapping and collected several mine grab samples, all exceeding 10g/t. The BLEG results, when interpreted against the historical drilling results, helped guide the targeting process of the Robex exploration drilling campaign to confirm the presence of mineralisation within the Sabali-Mansounia Corridor. 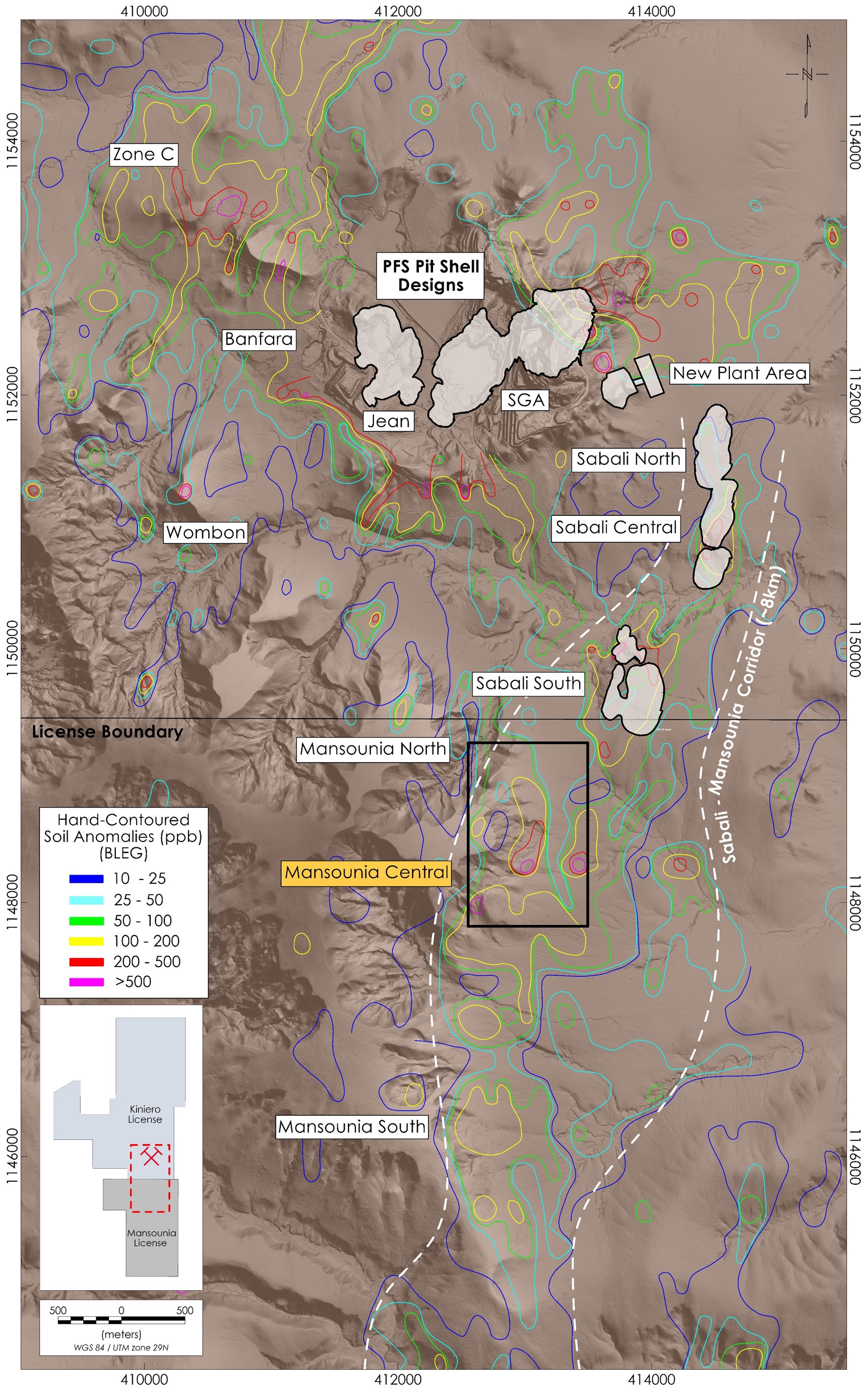 This Mansounia Central reconnaissance and verification exploration drilling campaign was completed in Q2 and Q3 of 2022. A total of 16 RC drillholes was completed for 1,716m with an average drillhole depth of 107m (deepest 150m). Drilling included the twinning of two historical Burey Gold RC drillholes. The following highlighted results represents a summary from this drilling campaign (only intercepts of ~1g/t over 2m reported): 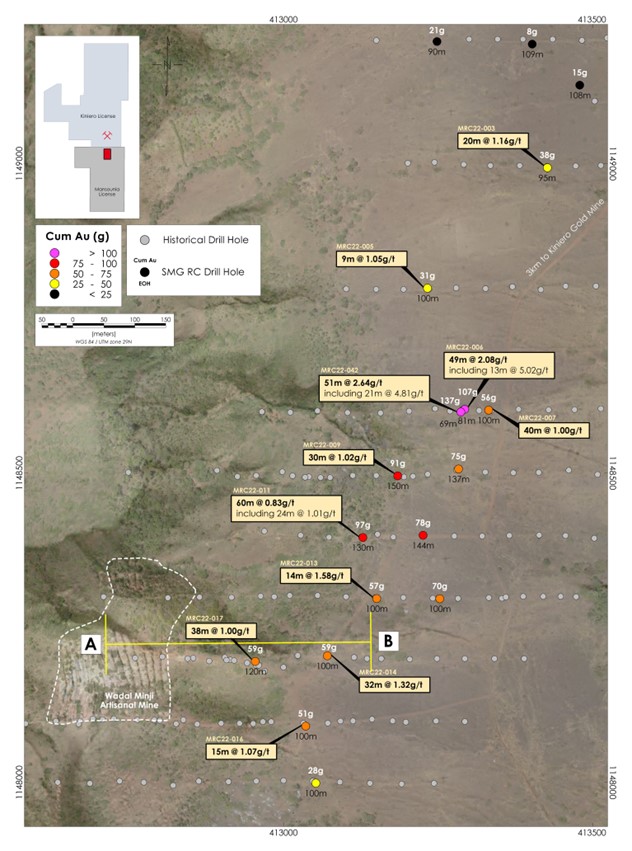 Twinning results of the Burey Gold Limited historical drillholes returned comparable mineralised horizons, both in terms of tenure of grade and intercepts, with local grade variances observed. The cumulative metal content was comparable, with high grade intercepts yielded in each of the twinned holes where expected:

BLEG results has confirmed that the Mansounia Central deposit, within the Sabali-Mansounia Corridor drill target, represents a target area that is >1.5km in strike length and between 500m to 750m in width. The drilling completed to date, both historically and recently, has not yet constrained the full geographic extent of the mineralised corridor, suggesting a significantly larger footprint, which remains undrilled. Results returned from this RC reconnaissance and verification exploration drilling campaign at the Mansounia Central deposit confirms: 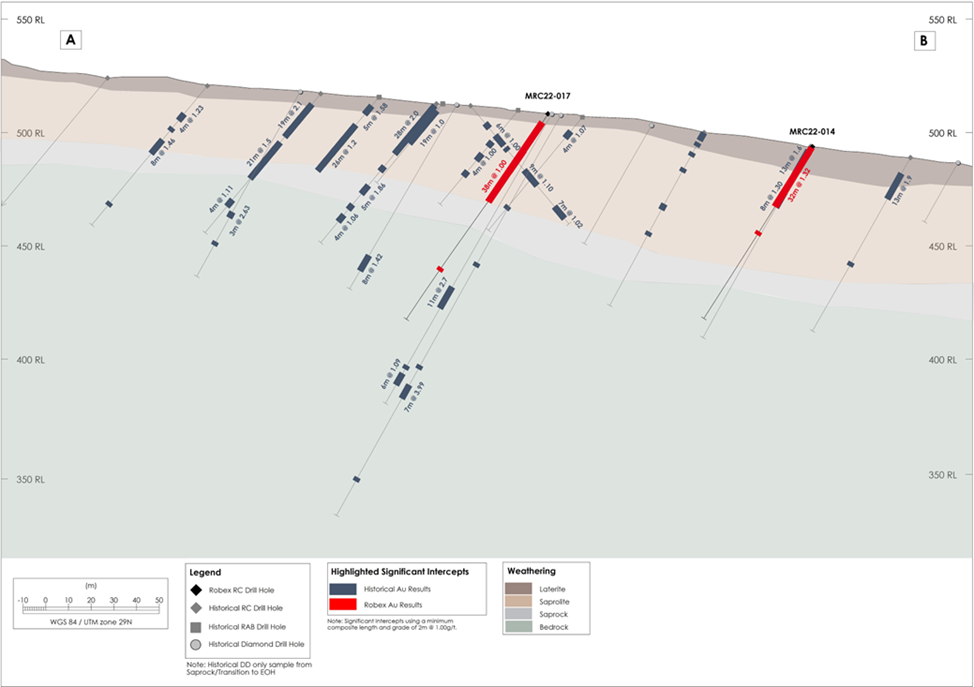 Certain information set forth in this news release contains “forward‐looking statements” and “forward‐looking information” within the meaning of applicable Canadian securities legislation (referred to herein as forward‐looking statements). Except for statements of historical fact, certain information contained herein constitutes forward‐looking statements which includes, but is not limited to, statements with respect to: the potential development and exploitation of the Kiniero Project and the Company’s existing mineral properties and business plan, including the completion of feasibility studies or the making of production decisions in respect thereof; the future financial or operating performance of the Company and the Kiniero Project; results from work performed to date; the realization of mineral resource and mineral reserve estimates; the development, operational and economic results of the prefeasibility study for the Kiniero Project, including cash flows, revenue potential, potential for staged development, capital expenditures, development costs and timing thereof, extraction rates, life of mine projections and cost estimates; magnitude or quality of mineral deposits; anticipated advancement of the Kiniero Project including mine plan; exploration expenditures, costs and timing of the development of new deposits; exploration potential and opportunities at the Kiniero Project; costs and timing of future exploration; the completion and timing of future development studies; estimates of metallurgical recovery rates; anticipated advancement of the Kiniero Project and future exploration prospects; requirements for additional capital; the future price of metals; government regulation of mining operations; environmental risks; the timing and possible outcome of pending regulatory matters; the realization of the expected economics of the Kiniero Project; and future growth potential of the Kiniero Project. Forward-looking statements are often identified by the use of words such as “may”, “will”, “could”, “would”, “anticipate”, ‘believe”, expect”, “intend”, “potential”, “estimate”, “budget”, “scheduled”, “plans”, “planned”, “forecasts”, “goals” and similar expressions. Forward-looking statements are based on a number of factors and assumptions made by management and considered reasonable at the time such information is provided. Assumptions and factors include: the Company’s ability to complete its planned exploration programs; the absence of adverse conditions at the Kiniero Project; no unforeseen operational delays; no material delays in obtaining necessary permits; the price of gold remaining at levels that render the Kiniero Project economic; the Company’s ability to continue raising necessary capital to finance operations; and the ability to realize on the mineral resource and mineral reserve estimates. Forward‐looking statements necessarily involve known and unknown risks and uncertainties, which may cause actual performance and financial results in future periods to differ materially from any projections of future performance or result expressed or implied by such forward‐looking statements. These risks and uncertainties include, but are not limited to: general business, economic and competitive uncertainties; the actual results of current and future exploration activities; geopolitical risk, political risks inherent to mining in developing countries, conclusions of economic evaluations; meeting various expected cost estimates; benefits of certain technology usage; changes in project parameters and/or economic assessments as plans continue to be refined; future prices of metals; possible variations of mineral grade or recovery rates; the risk that actual costs may exceed estimated costs; geological, mining and exploration technical problems; failure of plant, equipment or processes to operate as anticipated; accidents, labour disputes and other risks of the mining industry; delays in obtaining governmental approvals or financing; the speculative nature of mineral exploration and development (including the risks of obtaining necessary licenses, permits and approvals from government authorities); title to properties; the impact of COVID-19 on the timing of exploration and development work and management’s ability to anticipate and manage the foregoing factors and risks. Although the Company has attempted to identify important factors that could cause actual actions, events or results to differ materially from those described in the forward-looking statements, there may be other factors that cause actions, events or results not to be as anticipated, estimated or intended. Readers are advised to study and consider risk factors disclosed in the Company’s disclosure documents for a more complete discussion of such risk factors and their potential effects, which may be accessed through the Company’s profile on SEDAR at www.sedar.com.