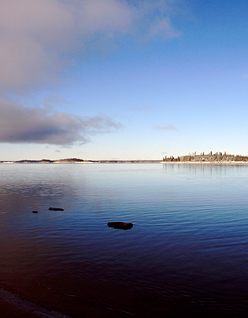 Rockex Mining’s assay results are proving what many people have known for years – there are large iron deposits in the Lake St. Joseph area of Northern Ontario, Canada

Rockex is bringing its four deposits into the modern age. A technical report prepared in compliance with Canadian securities regulatory requirements (NI 43-101) on Rockex’s largest deposit at Eagle Island estimates 590 million tonnes (Mt) of indicated resources and 415Mt of inferred resources with grading at a little more than  29 per cent iron.

“What is most interesting about Rockex’s iron principal deposit is the size and location. We have four iron deposits in fairly close proximity to each other and, in addition to the current resource estimate at Eagle Island, there are historic resources on the three smaller deposits – and I say small reservedly because each of them is about a quarter of a billion tonnes historically, based on work done in the 1960s and 1970s,” says Don Sheldon, chief executive.

He adds, however, that the company is not relying on those historical estimates or treating them as current defined resources since no work has been done to have them verified, but there are plans to prove it up in compliance with regulatory standards.

Rockex’s principal property, which encompasses Eagle, Wolf and Fish Islands, as well as much of the iron formation between and adjacent to the islands, is located in the Trist Lake Area of the Sioux Lookout District and covers the south-western part of Lake St. Joseph in Ontario. Rockex owns 100 per cent interest of 23 neighbouring mining claims covering 53km2 in the Patricia Mining Division, subject to royalties on certain mineral claims.

The deposit at Eagle Island is centred in the main north limb, is subvertical, up to 400m wide and has very little waste rock in it, explains Sheldon, meaning that open pit mining would have an extremely low strip ratio.

Sheldon notes that current drilling shows the deposit extends at depth – it was previously tested to about 350m when the resource estimate was completed.

But, as a result of additional drilling this past winter, the company now knows that the mineralised zone continues at least another 200m in depth and widens as it goes deeper. The most recent drilling showed this, while another target area, that of the southwest extension at Fish Island, tested the historic mineralisation of that area.

One of the drill holes at Fish Island intercepted 33.43 per cent total iron over 375m and included two well-defined horizons that intercepted respectively 38.85 per cent over 204m and 33.32 per cent over 153m. The data helps prove historic information while the explorer makes headway toward developing a current resource estimate on this second deposit.

The company’s next steps are to improve the categorisation of the resources at Eagle Island, to prove up resource estimates at the other deposits, complete metallurgical work to current standards, move toward a preliminary economic assessment and then toward a pre-feasibility study and feasibility study as the available information justifies, Sheldon adds. He expects the economic assessment to be done later this year, with the feasibility study (FS) about two-and-a-half years away and production expected, if all is according to plan, as early as late 2017.

Sheldon notes, however, that Eagle Island’s story is not just about the size and shape of mineralised zones, but also that its location is close to necessary infrastructure for mine operations.

Eagle Island is 80km north of the main TransCanada rail line operated by Canadian National Railroad, going through Sioux Lookout, a town with a resource (principally forestry) culture and its own airport, while on the north side of Lake St. Joseph are power lines and, 170km to the south, the TransCanada natural gas pipeline.

Rockex is looking at the potential of establishing processing facilities near the rail line, which would put the gas line about 100km away. This would simplify access to inexpensive, clean natural gas at the facility.  Meanwhile, the company is still deciding whether to produce pellets or upgrade to a form of hot briquetted iron or merchant pig iron.

“When we get to the stage of preparing a feasibility study [FS] that is when we would be determining what kind of product Rockex would be shipping and where we would be shipping it. If we are at all similar to some of the other iron exploration and development companies in Canada, before we get to completion of a FS we would probably be approached by some of the iron consumers around the world, looking to obtain offtake agreements for supply of our products,” Sheldon says.

China and India would be attractive markets for product, which could be railed to Canada’s west coast at Prince Rupert and shipped long distance across the Pacific by ship. But the industrial heartland of the US, running from Pennsylvania through to west of Wisconsin around the area south of the Great Lakes is firmly on the company’s radar as well.

“The whole industrial heartland of the United States is a big consumer of iron, producing cars, agricultural and farming equipment, construction equipment and even products like lawn mowers – a huge amount of iron is consumed in that area and our product could be shipped by rail directly or through a short rail line to Thunder Bay and then by lake freighter through the Great Lakes,” Sheldon explains.

Meanwhile, the surrounding area provides a natural labour market as well. In addition to the physical infrastructure available, close-by towns such as Sioux Lookout and other communities in the area service the lumber and pulp and paper mill industries. Adding mining to the mix would complement the various elements that already make up those communities, he notes.

Other communities existing in the region are two Ojibway Aboriginal groups, namely, the Mishkeegogmang and the Slate Falls First Nations groups. Their traditional land includes the Lake St. Joseph area and Rockex has maintained constant communication and met with representatives during the project’s exploration phase.

“It has been a good working relationship, we let people know when we are going to be working in the area, where we are going to be and First Nations groups have been helpful in supplying us with information on where we can get staff to augment our needs – whether it is people to work on our camp sites, or help get our equipment in and out of the water, or for help with barge services or drilling crews,” Sheldon says.

Other First Nations groups the company has engaged with are too remote to be directly involved in the exploration phase, although the company intends to increase dialogue as a production decision gets closer.

The deposits in north western Ontario have been close to production decisions before, but were side-lined by Brazil’s entry into the seaborne trade to North America and Europe in the 1970s. Steel producers started asking themselves whether setting up a mine was worthwhile given the cheap iron ore prices and as a result many mine development plans got shelved.

That mentality has largely reversed, as vertically integrated steelmakers aggressively pursue resources in order to control soaring, often volatile prices over the past few years.

Arcelor Mittal was early in the act with its bid for Baffinland iron ore resources in Canada’s north a couple of years back. But more recent examples include Hebai Iron & Steel Group, China’s top steel producer, which announced a partnership with Canadian explorer Alderon Iron Ore in a $195 million deal for a 20 per cent equity stake and 25 per cent interest in its Kami iron project in the Labrador trough region. And China’s third largest steel producer, Wuhan Iron & Steel Group, is partnering with Century Mines for development of mining projects in Quebec.

“Steel companies, in China especially, want to lock in security of supply, that is the kind of shift going on in the iron ore industry and that is why companies are looking at exploration companies like ours…there are a number of different elements that drives companies to make those strategic investments and that is part of the opportunity that has opened to Rockex – to help develop the capital and to source out customers for products,” Sheldon says.