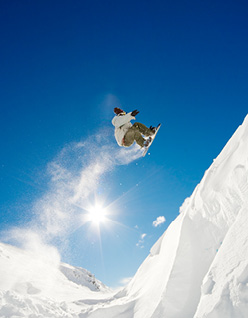 Concussions are becoming an epidemic in sports.

That is the story according to Adam Bennett, Director of Sales and Marketing for Safebrain Systems Inc., who spoke with The Canadian Business Journal about Safebrain, a new product which analyzes the impact of concussions suffered by athletes.

The technology of Safebrain Systems Inc. was developed by Rod Newlove, and tested by Dr. Martin Mrazik of the University of Alberta, who has conducted concussion studies for the past three years using Safebrain technology.

A sensor that attaches to any sports helmet and records potential brain impacts, Safebrain measures g-forces, acceleration relative to free-fall. If the g-force level is exceeded, an LED illuminates as an indication that head trauma may have occurred and should require further medical evaluation.

“It doesn’t necessarily mean that the player has a concussion, but it means that there was a significant impact that should require some attention,” Bennett explained. “It alerts the trainers and coaches that something may have happened to the athlete. You can download the information to see which direction the impact came from and the impact of the g-force.”

Described as the “black box for the brain,” Safebrain records information that can then be used for further evaluation by sports doctors and athletic specialists. Rival products do not offer such an extent, and can only indicate if any impact has occurred, but no additional information for further analysis. Alternatively, the information provided by Safebrain is very valuable and is not found elsewhere in the marketplace.

While still much in a beta stage, Safebrain has in fact been tested by a variety of sporting organizations, including the Western Hockey League’s Saskatoon Blades. The sensor inside players’ helmets is the most significant part of the concussion study as it records the impact data to be further analyzed.

The Blades used a team kit available through Safebrain. The company will soon be launching its individual product as well, which will protect those players participating in a team sport or an individual sport, including hockey, lacrosse, football, bicycling, skiing, and others, any sport where an athlete may be vulnerable to an impact which could potentially cause a concussion.

Moving forward, the goal is to have the Safebrain sensor product more available to the general public and sports consumers as soon as possible. As such, Safebrain works alongside its manufacturers in the prevention of concussions and has the technology to provide feedback on dangerous and harmful impacts to the head.

Over the years, sports gear has become more protective. Players are bigger, faster, and stronger, and while equipment protects the body, the brain can still rattle inside a helmet.

“We are recognizing the signs and symptoms of concussions,” Bennett said. “We are more aware that these injuries are taking place, rather than being told to suck it up or that you got your bell rung. It is a serious brain injury that requires care. It is acknowledged now that it is happening far too frequently.”

Concussions are appearing more frequently, though the same can be said for proper concussion diagnosis and treatment. And while Safebrain cannot prevent concussions, but rather alerts when an impact has occurred, it is helpful in recognizing second impact syndrome, an ailment that occurs when an athlete suffers head trauma or an impact to the brain shortly after experiencing the original concussion. Most recognizable to this is National Hockey League superstar Sidney Crosby, who suffered a concussion in January 2011 and was then diagnosed with second impact syndrome almost one year later in December 2011. The result has been a year’s worth of concussion questions, studies, and medical testing, aside from missed on-ice time.

According to the Safebrain website, about 300,000 sports-related traumatic brain injuries occur every year in the United States, with the majority of these head injuries diagnosed as concussions. It indicates that the risk of a concussion increases for an athlete who has previously suffered a traumatic brain injury, particularly brain injuries occurring in an abbreviated time frame. Second impact syndrome was first characterized in 1984 and its symptoms have been reported more and more frequently since that time.