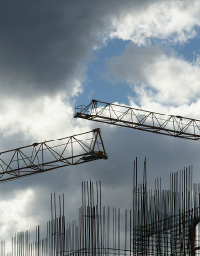 The Saskatchewan Construction Association represents approximately 1,500 companies around the province in industrial, commercial and heavy construction, dealing with all the sub-trades and general contractors.

“We weathered the storm. During the height of the recession, we were doing pretty well. Our members were busy,” said Fougere.

Formally founded in 1966, and governed by a membership-elected Board of Directors, the Saskatchewan Construction Association and its members are a reflection of what is happening across the economy, particularly in Saskatchewan.

“Our message is that we have a lot to say about how to move the economy forward and we advocate on behalf of our membership to the government, both municipal and provincial, on ways to improve the economy,” said Fougere. “It is all about infrastructure and money going toward sustaining our economy through the recession and that is sensitive toward what we do as an association.”

Always working with the human resource industry, one aspect of that work is identifying and attracting youth into the trades, namely high school students who are deciding career paths to kids who have recently left school.

“We have a severe lack of skilled trades in Canada and that is because our population is growing, but people are retiring. We have a fair amount of vacancy in virtually all trades. Our focus is on trying to meet the labour force needs of our companies,” Fougere emphasized.

“We are also looking to do more value-added activities, such as attracting First Nations and Aboriginals people into the workforce. They are not mainstreaming working, and our industry is committed to both the provincial and federal governments to work with First Nations people and get them into the trades, everything from life skills development to skills training to being in the workforce.”

According to the Saskatchewan Construction Association, the other element that is exciting is helping its companies understand their labour force needs, helping to attract and retain workers, with successful transition to new ownership and assessing the abilities of a company’s personnel to move forward.

Historically, students, parents and citizens as a whole do not traditionally view the construction trades as a first career choice.

“I think it is fair to say a lot of the guidance counselors in high schools tend to direct students to the academic side. Trying to articulate a vision of where the opportunities are, why these careers are extremely rewarding is not an uphill battle, but it takes a bit of recognition,” said Fougere.

The Saskatchewan Construction Association has been quite successful in convincing the government of the need to invest in the apprenticeship system, understanding that for the industry to respond to the province’s infrastructure needs it must supply the association with a budgetary plan.

The Saskatchewan Construction Association houses the electronics plans room, which is the electronic version of the blue prints, to bid on work, something that is critical to its membership. As President, Fougere does the advocacy work to represent and further the interests of the association’s members from everything from tax policy to labour issues to workers compensation board issues, among other things.

The goal for the Saskatchewan Construction Association is to continue to doing what it is doing. The association recently completed a strategic exercise to focus its attention on the major emphasis on human resources development, to provide that service to its members and advocacy, where the government calls upon the association to respond.