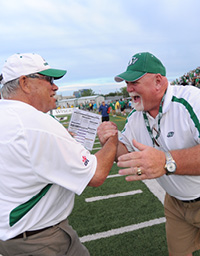 Success on the field and in the boardroom

The measure of success, for any sports franchise, can be heard by the numbers of screaming fans that show up to the game, but success also has to be measured behind the scenes as well.

In Saskatchewan, success is heard at Mosaic Stadium, where Saskatchewan football fans have watched their team, the Roughriders, play for more than 60 years. The Roughriders are a team held together not simply by wins or losses, but by an unfalteringly devoted community. Fans show support through attendance, but also through the hundreds of invitations the Roughriders players get to events and charity fundraisers, a sure sign that the community is very close with its star team.

The last time we had the privilege to speak with Roughriders management was in May 2009, and coming off a 2007 Grey Cup win and three successful seasons following, the Roughriders have gone from just surviving to thriving.

Until 2005, the Roughriders were run by volunteers and a very small staff including few paid employees: players, coaches and the team’s GM. They employed a small admin team and since 1948, the business model was successful—in relative terms.

The team relied on the community and province for support, and the idea behind franchise growth was simply to keep the team going. However, in 2005, the Roughriders successfully changed their business model—knowing that in order to secure the team and provide a stable future in the CFL, they had to incorporate a business structure complete with shareholders, a board, and a management team. The model is working out very well, and things have improved considerably since the structure has been in place.

Jim Hopson is the Roughriders first President and CEO, and has been a football fan since childhood. Hopson played for a few seasons with the team in the 1970s, before going on to a career in education and then returning to lead the franchise.

Hopson says that since the last time he spoke with CBJ, the Roughriders have been successful at making the right plays, in the boardroom and on the field.

“The whole atmosphere around the Riders has really changed,” Hopson begins. “There is now that expectation that we’re going to be a great team, which is different from a few years ago when we were just hoping to make the playoffs.”

With a newer coaching staff and star players, expectations have risen. Quarterback Darian Durant is expected to have a great year in 2011 off the back of his 2010 season. It is his sixth season in Saskatchewan and, in 2010, Durant started all 18 regular season games, both during playoffs and the Grey Cup. He was the Riders nominee for Most Outstanding Player and finished the regular season completing 391 of 644 passes for 5,542 yards and 25 touchdowns.

Greg Marshall joined the team as head coach, bringing a decade in coaching experience in the CFL, and a reputation of one of the best defensive minds in the game. Prior to joining the Riders, Marshall spent the last two seasons in Hamilton where he held leading positions with the Tiger-Cats. With some serious star athletic and coaching power at the helm, Hopson sees 2011 as a year of “business as usual in terms of having a good team.”

Ticket sales have been phenomenal for the Riders in both renewals and new sales, and this is a much different scenario from when Hopson started with the Riders six years ago. “When I started, there were several obvious areas we could work on including ticket sales, which have boomed from 7,000 in 2005 to 20,000 this past season.” Much of the momentum behind the Riders is through sales and merchandise appearing all over Saskatchewan. “When we looked at our business end in 2005 we saw all kinds of opportunities that were right for going after. Now, we have three full-service stores in Saskatoon and one in Regina, and we’re making improvements in our stadium store as well as making merchandise web sales as a big focus,” he adds.

Saskatchewan and the league

Momentum for the Roughriders also comes in the form of provincial support and growth. Although Hopson says that the developments for a new stadium plan are not yet in full swing, Roughriders fans and the province alike are geared up for the possibility of a new playing field to replace Mosaic Stadium—a place that has seen its share of wear. Local government and the public are keen to see a new stadium built, even if it costs taxpayer dollars, because there is huge support for the team province-wide.

“The province, the city, and our team know there is big talk around what’s going to happen with our stadium. We’d love to see a new multi-purpose facility with a retractable roof and we are optimistic. We’re just waiting, and we don’t have a definitive answer yet. We are looking forward to securing the long-term future of the team with the possibility of a new stadium,” Hopson says.

There is a wealth of support for the CFL on a larger scale, Hopson explains, which has only fuelled the desire to stay on top and see CFL teams grow. “You can’t get complacent in professional sports. We can’t get so full of ourselves because the reality is that our fans and the provincial economy carry us through. We’re seeing the perfect storm of success, with people in Saskatchewan experiencing good times and spending disposable income—we’re excited about the league,” Hopson says of the CFL.

“I’m really encouraged by the ownership of the franchises and encouraged when I see people wearing Rider gear. There are lots of positives for us, and I am hopeful that we can put the pieces together with our coaching staff and players to give us that competitive team that our fans have come to expect,” he continues.

There are legions of Saskatchewan fans around the province, in Canada, and spanning North America, and that vibe of success is contagious.

“Now, we’re not just about developing the obvious opportunities, we’re looking for new ones. We’re community-owned but we know in order to be successful both short- and long-term we need financial stability. You hit some bumps as a professional sports team—and we’ve got to be able to weather those and have the resources to carry forward,” Hopson comments.

“We need enhance our business, and strategize for how we stay a very desirable franchise for players and coaches.”

One thing that has not faltered over the years: the Roughriders are a people’s team. Hopson says that there are several players who live full-time in the region and commit wholeheartedly to community initiatives. “It would be hard to find a major event that we wouldn’t have some involvement in,” he reasons. Now, the challenge is to spend people resources where the Roughriders think there is long-term value. “We’re trying to make sure we’re connected with the right causes.”

The expectations are rising for this world-class football team, and the Roughriders are goal-focused. The team will start the season with an expectation that they’ll be hosting a home playoff game—which says a lot to Canadians who will either watch a game on TV, or show up in their best green and white get-up (and watermelon hats). Thousands of Roughriders fans are counting on the team, and the guys in green and white are sure to be successful in the CFL—on and off the field—for many seasons to come.

Update: As CBJ went to press, we got word that the plans for a new stadium have been shelved, due to a lack of funding that was supposed to come from the federal government. The feds have declined to kick in the 20 to 25 per cent of the estimated $430-million needed to build the new facility.