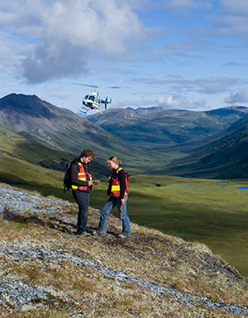 Developing a world class deposit does not happen every day

In 2005, the British Columbia-based base metals exploration and development company purchased the  Howard’s Pass Joint Venture project and combined it with its own lands, and Sewlyn Project was born.  The Selwyn Project consists of 7,450 hectares of mineral claims in the Yukon and 2,162 hectares of mining lease lands in the Northwest Territories, providing the company with control of over 66 kilometres in what is becoming a world-class zinc-lead district.

The initial discovery was made by Placer Dome, when it made an accidental discover of very large zinc lead deposit. Selwyn bought 100 per cent of the Howard’s Pass project as it was known in 2005 and turned on the drills.  Dr. Harlan Meade, President and CEO of Selwyn, with degrees in Geology and Business Administration, was encouraged by the  potential large size of the deposit  that like all the major zinc-lead deposits  are sedimentary exhalative (SEDEX) deposits  formed on the sea floor.

Initial results  demonstrated that the three known deposits, the X Y central and two more in the middle of the belt were not isolated deposits but rather they were part of one large continuous deposit extending for at least 38 kilomteres. The average grade was approximately five percent zinc and two percent lead, which historically would be viewed as moderate to low grade, but is now similar to the average grade of zinc/lead mines in production today.

Initially, Selwyn evaluated mining these deposits by open pit methods. “Then we discovered high grade mineralization within five of the zones and substantial tonnages were defined having, two times the average grade of the aggregate mineral resources (10 per cent zinc  and four per cent lead); that was exciting.”
Today, Selwyn’s bankable feasibility study is focused on developing two of those zones as high-grade underground mines feeding the central concentrator at 8,000 tonnes a day. The annual metal output is  estimated at 255,000 tonnes of zinc metal and about 60,000 tonnes of lead metal in concentrate, putting Sewlyn in the top five largest zinc-lead mines in the world.

“And that is just Phase 1,” says Meade. “As we do more drilling it’s becoming clear there is a high probability that these five high-grade zones, over a distance of 18 kilometres, may be part of one large high-grade core zone within the larger deposit. Although that is an amazing fact, it’s probably what we should have all expected, that this long deposit would have initially had a substantial continuous, high-grade core zone.”

And that is exactly what Selwyn has learned with its continuing exploration. “As we drilled, we demonstrated the continuity of the high-grade mineralization beyond what was known a few years ago. Including the inferred mineral resources along with measure and inducted, it’s crossed the line and is not only the largest undeveloped zinc-lead deposit in the world, it is also the largest zinc-lead deposit in the world.

“We are just starting to drill, we don’t really know how big it is, but certainly it is going to grow as drilling and exploration continues. We will probably still be drilling 30 years from now, there is that much favourable geology in the deposit area that we haven’t begun to drill.”

At this point, like all big deposits, the project will be developed in stages. Selwyn and its joint venture partner Chihong Mining Canada Ltd. have thought about what is going to give the fastest pay back of its capital and best economics, and thus focused on underground mining. “Later on, I’m sure we’ll see open pit [mines] added to the mix to get further economies of scale,” says Meade. “If we double the output, which is not a stretch, then we will be tied with the two other biggest zinc-lead mines in the world.”

Meade and the Selwyn team determined back in the fall of 2010 that the market is not valuing exploration development stories as highly as they should; the market was more favourable to producers. Selwyn then made moves to accelerate the day it would become a producer and undergo a revaluation in the market; that is important because in the not very distance future, the company will have to raise a lot of debt and equity capital for for Selwyn Project.

“We determined that if we could acquire cash flow, either buying an operating mine or a mine that could be put back into production in short order, that that would be the catalyst for significant re-evaluation of Selwyn as a company,” says Meade. “That would [also] reduce our cost of capital for the main project which is expected to be financing in the middle of next year. A year from now we will be doing major project financing for Selwyn Project.”

After looking at a number of potential acquisitions Selwyn settled on ScoZinc Limited, and its Scotia Mine in Nova Scotia. It purchased of all of the shares of ScoZinc for $10 million. “The completion of the acquisition of the shares of ScoZinc Limited marks a turning point, as it provides an early opportunity for Selwyn to join the ranks of the producers,” says Meade. “The projected cash flows from the re-start of the Scotia Mine expected in early 2012 are strategically important to the securing of debt and equity for the development of the Selwyn Project.

The commencement of production at the Scotia Mine should act as a catalyst for the revaluation of Selwyn and its Selwyn Project based on discounted future cash flows. Additionally, Selwyn is expanding its management team to undertake the restart of the Scotia Mine, with the recent addition of several key senior management personnel as an important step in preparing for financing of the Selwyn Project.

Selwyn and its shareholders are at the beginning of what is going to be a lucrative and exciting journey. With the management team carefully directing the course of the company, due diligence is done to extract the most value out of an extraordinary deposit. This will be a company to watch, and an example of doing things right. “We have been fortunate to have a world class asset and a strong partner at Selwyn Project,” says Meade. “It is important and behoves us to get it right. Developing a world class deposit does not happen every day.”