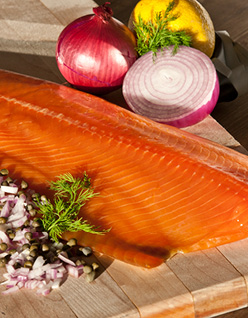 Rob Sgambaro, a professional chef with more than 20 years of experience in North America and Europe, and the President of Sgambaro’s Signature Seafoods, spoke with The Canadian Business Journal.

Founded in 1995, Sgambaro’s Signature Seafoods was originally known by the name Experience Gastronomique, meaning “the art of good eating.” This dedication to offering only the best in quality food is evident in the company’s mission statement as well, as stated, “To present individuals with the chance to experience some of the excellent foods that [Robert] has been exposed to throughout his life.”

Reads the Sgambaro’s Signature Seafoods website, “With the promise that we will only use the best and freshest products available in the marketplace to create all of our culinary food products, our mission is to educate people of the gastronomical food delights that exist in our world that they may never otherwise experience. Rest assured that when you see the Sgambaro’s logo, you are seeing the emblem of quality.”

What began as a home-based business is now housed in a 2,400 square foot seafood processing facility, while the company only anticipates continued, steady growth moving forward.

While some may question why a seafood processing company is based in the landlocked province of Alberta, Sgambaro believes the location of Sgambaro’s Signature Seafoods is in fact what gives the company its edge in the marketplace.

“The huge competitive advantage I have is being in Edmonton,” Sgambaro said. “There is nobody else doing what I’m doing in Edmonton. Some people think, ‘Why wouldn’t you [operate] on the coast where the fish are?’ But either way, you’re processing the fish and then shipping them to get here, so it’s not such a big disadvantage.”

Primarily operating in the Edmonton region, Sgambaro’s Signature Seafoods has plans to make a major push into the lucrative Calgary market, just 300 kilometres south of Edmonton, in an effort to further broaden its consumer base across the province.

Sgambaro’s Signature Seafoods satisfies the Alberta market with its commitment to fresh, never frozen seafood. Its signature product is naturally cold smoked with hickory wood chips. Sgambaro detailed, “Lots of frozen product comes into the city, whereas we are bringing the whole fish to the city and processing it, for just-in-time delivery. We separate ourselves from our competition locally by not building a huge freezer and filling it full of product.”