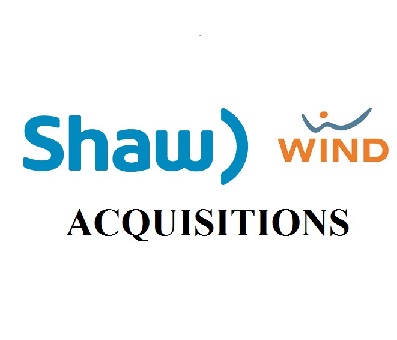 CBJ — Despite previously opting to not be part of the massive wireless telecom industry, Shaw Communications has done a 180 and is now making its long-anticipated entry into the highly-competitive business by acquiring Wind Mobile for $1.6 billion.

The Calgary-based telecommunications company will buy Canada’s fourth-largest mobile operator by subscribers, pending a number of regulatory approvals, including the Competition Bureau and the Ministry of Innovation, Science & Economic Development. Shaw expects the transaction to close in the third quarter of 2016.

Shaw dropped its previous plans to introduce a mobile network in 2011, and two years later signed a deal to sell the spectrum it owned — selling it to Rogers. However, many industry analysts felt it was only a matter of time before Shaw stepped back into the ring, if for no other reason than to keep up with the likes of the so-called Big-3.

Wind Mobile, which is based in Toronto, has about 940,000 subscribers across Ontario, British Columbia and Alberta. It was founded by Anthony Lacavera, who also founded Wind’s parent company Globalive, where he remains as Chairman. Lacavera served as Wind’s first CEO before handing over the reins to current CEO Alek Krstajic. It’s believed Krstajic and his executive team will remain on to lead Wind after the sale to Shaw is completed.

As the head of Wind Mobile, Lacavera had for years championed the rights of newcomers entering into the wireless business saying that the Big-3 were given many advantages, including gifted spectrum from the government, which made it that much more difficult for new players to be competitive. Over the past decade many other small wireless telecom companies have come and gone, but Wind always managed to not only survive but continue to grow under Lacavera’s leadership — and now Krstajic’s.

Lacavera tweeted “I founded @Wind to bring choice and much-needed competition to #CDN wireless. Excited about what’s next for @globalive!”