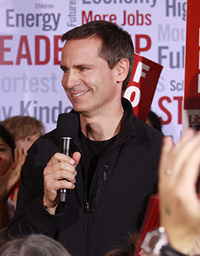 The knockout seemed inevitable. Taxed-to-death Ontarians were poised for full-force change, ready to sweep the Ontario Liberals to the sidelines and hand the provincial reins to the fiscally-restraint Progressive Conservatives.

Ontario looked to go blue, a Tory and blue collar victory, with many a voter uprising to the Liberals’ single solution of tax—eco-tax, smart meter tax, the future possibility of a carbon tax—to vote in real change for hardworking Ontarians.

Seemingly, there was an overwhelming amount of negative vibes to not only topple but decimate the Ontario Liberals from the leadership, handing a majority mandate to the PCs. Then, Ontarians—and a few union strangleholds—decided that more McGuinty was in order. In the end, the Ontario election results were a mix of shocking and sickening.

On October 6, the Ontario electorate went to the polls—in record-low numbers, at 49.2 per cent—and returned incumbent Premier Dalton McGuinty to the leader’s seat at Queen’s Park, for his now-third term representing the Province of Ontario, but first time with a minority in the legislative assembly.

The only poll that counts

How did that happen? In polls leading up to ballot box day, Ontario PC leader Tim Hudak appeared run-away victorious, caution for campaign havoc, which now appears as if that was the final result.

“As we fought for, Ontario families need and deserve relief for the family budget that has been squeezed these last eight years beyond what they can afford,” Hudak said during his concession speech.

In June of this year, two major polling firms, Ipsos-Reid and Forum Research, declared major leads for the Ontario Tories, as much as 11 and 15 per cent, respectively, over McGuinty’s Liberals. A slam dunk, probable majority victory for the Progressive Conservatives was in the making.

But as the weeks dragged toward October 6 in this less-than-inspiring election campaign, the tables began to turn, pointing toward yet another Ontario victory for the Liberals. And when the final votes were tallied, the Liberals won 53 seats, enough for re-election, but a drastic fall from its former 70 seats, as well as a single seat short of majority rule.

Meanwhile, the PCs picked up the Official Opposition with 37 seats, a big jump from the 25 seats it held entering the election. The third-wheel New Democrats also gained seats, up seven seats to now have 17 representatives at Queen’s Park. In terms of the popular vote, however, the results were much closer, with the Liberals at 37.6 per cent, the PCs at 35.4 per cent, and 22.7 per cent for the NDP.

It’s a disappointing result for the PCs, who looked to have the win in the bag, but seemingly went off the tracks as the campaign neared its finished line. The key to victory for the PCs was breaking the seal to the lucrative Greater Toronto Area ridings, where the party has failed to gain any seats in the previous two provincial elections, in 2003 and 2007. Home to more than 30 ridings, a handful of victories in Toronto may have made the difference for the PCs. However, once again, the PCs struck out in the Ontario capital.

Perhaps the best summary of the election results is this: Toronto elected a Liberal government. The rest of Ontario elected a Progressive Conservative government—save for speckles of Orange in Windsor-Essex, the Niagara Region, and Northern Ontario.

For the PCs, the focus now turns to an official leadership review to be held at the party’s next caucus meeting, protocol after an election loss, to determine whether Hudak will remain as party leader.

The sense is that although Hudak and his party lost an election that should have been nothing but a clean-sweep victory, the PCs will focus on the positives—notably gaining double-digit seats at Queen’s Park and a reduction of McGuinty’s Liberals to minority status that will allow for more PC power. There is also hope that a non-confidence vote to defeat the government prior to the next Ontario provincial election could come into play prior to the four-year term expiration in 2015.

Hudak said, “I hope we’ll see the Premier approach us with a little bit more humility. We recognize we had great gains in the province. We had some areas we didn’t gain, but we’re going to fix that and we’ll win next time.”

The assumption here is that Hudak will retain the leadership, though I suspect there is greater pressure for Hudak to better resonate with voters next time around, in terms of more policy substance of his own ideas, rather than a supposed ‘anti-McGuinty, the tax-man’ platform.

“It is very clear that the people of Ontario have sent a strong message that they want a change in direction, [and] have put Dalton McGuinty on a much shorter leash,” Hudak said.

“[Voters] expect us to focus like a laser on creating good, sustainable private sector jobs. They expect us to rein in runaway government spending, to make smarter choices with their tax dollars, and to ensure that government lives within its means. Time will tell if Dalton McGuinty actually got the message.

“Although we did not get the result we wanted, I am damn proud of the campaign that we ran across the province of Ontario. We can point to progress tonight.”

‘Progress’ is the key word here. Hudak will have the opportunity to progress further upon his return to the legislature, looking to build better consensus, inspire the electorate, and add to the gains made by the Progressive Conservatives.