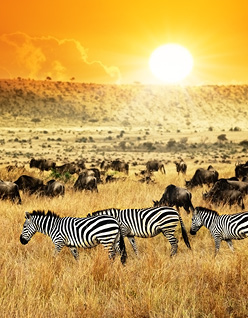 The last time a group went out scouting for West African onshore oil and gas opportunities akin to Vancouver-headquartered Simba Energy Inc. (TSX.V: SMB) (“Simba”) was back in the 1970s. Impressively, in less than one single year this tenacious junior has barrelled in and assembled a true frontier-portfolio of pan-African overlooked and underexplored basins. The team, led by company founder Hassan Hassan, is now in possession of all manner of production sharing contracts (“PSCs”) and pending PSCs stretching from West Kenya (where analysts predict Simba’s 100 per cent owned Block 2A will see exponential progress in the coming year) and Republic of Guinea (“Guinea”) to Liberia, Mali and Ghana.
“When we say ‘frontier,’ we really mean it,” Hassan says.

“Our focus really is on going where other people aren’t, or can’t.”

When Simba’s team first saw potential in onshore Liberia, they accrued mixed responses from industry. Could this intrepid new group have discovered hydrocarbons skirted over by majors? Is this team chasing high risk/high reward opportunities really onto something?

As the portfolio has since taken shape—particularly where focuses in West Kenya and Guinea are concerned—you need only look at the multinationals that have followed suit and started circling in, to see that Simba has a knack for leading the way into new, prospective oil and gas realms.

From then on the junior has been active in Liberia, first acquiring 90 per cent of International Resource Strategies Liberia Energy Inc. (“IRSLE”); including a 1,366 square kilometre license covering an onshore stretch of the Roberts and Bassa Basins now popular offshore.

“We started out not specifically looking for oil and gas, but at gold, diamond and uranium prospects,” Hassan says, recalling the intriguing stories of kerosene contaminated water frequently told in Monrovia.

“We ran a 2D seismic map of the basin and saw that it ran onshore. In early 2008 we went to the Liberian government about getting an onshore PSC; but the legislative structure to do that didn’t even exist at the time. Nobody had ever asked before.”

Hassan stuck to his guns. He continued to remind the government of his interest in getting access to the ground and his efforts paid off when the National Oil Company of Liberia (NOCAL) granted Simba its Hydrocarbon Reconnaissance License NR-001 in January 2009: The license Simba later applied to convert to a PSC in October 2010. This development is imminent (Hassan says that the completed PSC draft is with the authorities, final approval pending) and the team has already secured favourable contract terms ahead of getting the green light. After all, Hassan says, “timing is everything.”

“One aspect behind getting the Hydrocarbon Reconnaissance License in January which is now absolutely key, is that we have the first right of refusal on a future production contract,” he explains.

“Since that time, majors such as Chevron have come into the area and that’s provided a huge amount of validation for us.”

Although it is still early days, the onslaught of interest in the offshore next to Simba’s acreage is mounting, and test work on its ground continues to bear encouragement. Elsewhere, in de-risking the portfolio outside of its Liberian starting blocks and forging ahead to other frontiers, Simba has picked up other assets which look capable of being company-makers on their own.

Acquiring the onshore Block 2A PSC in West Kenya (August 2011) marked a significant milestone for Simba. Unlike Liberia, where the team took a leap and look set to reap the benefits pending PSC granting, the area is swarming with multinational explorers. Neighboured by Tullow Oil Plc. (and their recent discovery) and independent explorer Afren Plc., Simba’s 7,801.72 square kilometre Block 2A PSC is surrounded by interested parties and plans for future production. Encompassing the southern tip of the Mandera Basin as well as the Anza Basin to the southwest corner, Block 2A is a prime example of the low cost, underexplored projects this junior is becoming known for, and Hassan says that there are three key areas of interest within the license.

Area 1, associated with the Tarbaj oil seep just 50 kilometres away, is due to undergo 1,200 kilometres of seismic planned by adjacent acreage holder, Afren. Area 2, home to gas prospects in the Karoo as well as shallow oil prospects, is set to benefit from 600 kilometres of seismic planned by Lion on its Block 2B adjoining acreage. And Area 3, an Albertine-type play, borders ground belonging to Canadian explorers Lion Petroleum and Africa Oil Corp.

“Everyone is very optimistic about hitting oil here this year and if Tullow manages to do that, our block should become extremely valuable,” Hassan says.
“We’re anticipating farming out one or more of the blocks in the next year, and Block 2A is certainly up there.”

It isn’t the only near-term opportunity for majors to partner with Simba either.

Describing Simba’s two licenses held onshore in Guinea—Blocks 1 and 2 (acquired in July: 60 per cent) covering 12,000 contiguous square kilometres—Hassan says the acreage is similar to Liberia, but approximately six times larger. The blocks are within the Bové Basin which is home to three known reservoirs, and although little deep exploration has been conducted to date, Simba’s recently completed detailed technical review confirms extensive surface oil seeps, indicating an attractive hydrocarbon system.

“We think that this could hold an elephant-sized reserve,” Hassan says.

“In fact, I want to drill both Liberia and Guinea as soon as possible.”

Simba’s plans to complete on acquiring 60 per cent in both blocks from Summa Energy await final approval from the Ministry of Mines and Geology. Once this is obtained the team will carry out low cost reprocessing of existing seismic data over the coming year, and immediately submit a new work programme to the ministry. Meanwhile, at its Malian and Ghanaian properties, the company anticipates further good news.

Having received formal notification from Mali’s Council of Ministers on the granting of a PSC for Block 3 (22,500 square kilometers west and centre of the Taoudeni Sedimentary Basin), Simba expects that a trip to Bamako for the final signing ceremony is imminent—mere weeks away. It will be an event of interest to many; not least foreign giants including Italian petroleum group Eni SpA (Block 3’s previous owner) and French oil major Total, which has already made several significant discoveries in the area on the border with Mauritania.

“Like Kenya, this project alone could make the company,” Hassan says.

“Block 3 has already undergone $11 million in 2D seismic spending by Eni (to 2008) before they relinquished it and we picked it up.”

In Ghana, where Simba has submitted its application for a PSC totalling 8,700 square kilometers in late 2010, there’s more cause for quiet optimism as the company awaits word from the country’s technical committees.

“When we went to Ghana’s Volta Basin we were the first in decades to even apply,” Hassan says.

“In the 1970s Royal Dutch Shell did some drilling and shot seismic work and it came up dry for oil.”

But not for gas. Now targeting a very large gas play through identified potential, Simba has picked up the forgotten ground and garnered plenty of attention in the process. Although it is an early stage project, a future PSC in the Volta Basin may well provide another option for farming out acreage in years to come.

Behind Simba’s projects and various pushes towards advancing and acquiring PSCs comes a startling commitment to bettering the communities encountered along the way. It’s about more than fulfilling CSR requirements and turning profits; it’s about moving in for the long haul wherever the work takes the team.

Hassan uses Simba’s first foray into Liberia in example, explaining that getting the Hydrocarbon Reconnaissance License—or attempting anything so unfamiliar in the country—was as much a matter or trust, staying power and local commitment as it was getting into a great opportunity. This is one of the differentiating factors woven into the way Simba has been founded, that enables its team to lead the exploration charge in truly unchartered areas of potential.

“Getting into Liberia was a serious leap, and from then on we’ve worked tirelessly and spent a lot of time and money accumulating abundant data throughout our properties,” he says.

“You’re not going to find a billion barrel oilfield in North America, but if you can do it right in Africa, the possibilities are endless.”

This is not your average fly-in/fly-out troop of foreign oil execs—this is a highly ambitious, small firm of like-minded experts firmly focused on what it will take to establish hydrocarbon output in brand new territories. Unsurprisingly, as the company plans to be admitted to London’s AIM Market in the future, majors are already acutely aware of what is on offer from Simba. Between progressing detailed works in West Kenya, final government approval in Guinea, near-term contract developments in Mali, readying to drill in Liberia and getting word on proposals in Ghana, not only will Simba establish itself as an outstanding junior; it will put new regions of great exploration promise on the map and play an incremental part in Africa’s oil and gas future.