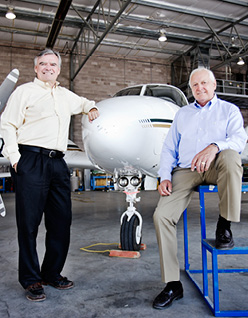 Eye in the sky

From its base in Calgary, the company is providing a valuable exploration tool to resource houses across the globe through data that can predict the presence of pressurized hydrocarbon reservoirs for prospect evaluation and verification.

“The system itself involves a low-level aircraft flying 100 metres above the highest point of the survey area,” explains co-founder and Vice- President Russ Duncan.

“The equipment gathers hydrocarbons through an intake on the plane, concentrates them, runs them through a plasma system and then through three different sensors that measure gas and oil, before mapping it out.

“We then bring that data back to Calgary, process it, and present maps of where the highest hydrocarbon concentrations are,” he adds.

This cost-effective and rapid solution to data acquisition can be used in all conditions and terrains, including water, ice, and seismically-active areas.

Sky Hunter’s co-founder and Pesident, Ken Bradley, first became interested in airborne hydrocarbon microseep detection technology in the late 1990s. By fine-tuning an existing prototype detection technology he found he was able to offer a useful tool to the oil and gas industries.

“By flying a survey, you end up with a planned view of where the hydrocarbons are—in essence a treasure map of where to look for reservoirs—and the environmentally friendly nature of the airborne technology also helps speed up the exploration process,” Duncan remarks.

“A lot of the other airborne surveys measure magnetics and gravity, which are good tools to look at rock properties, but we’re the only ones that offer direct hydrocarbon mapping in the air of microseeps.”

Microseeps are what are collected in an intake scoop attached to the nose of an aircraft. The intensity of each microseep is measured and the data used to generate a hydrocarbon footprint map.

“As hydrocarbons move through the cap rock, they pick up a charge, and the later molecules are then negatively charged and pulled toward the atmosphere.

Up above down under

Capable of conducting up to 1,000 line kilometres of microseep data per day, the technology has been used in some of the world’s most developed hydrocarbon regions including sites in Canada, the U.S. and Australia.

According to Duncan, Sky Hunter has undertaken a selection of significant surveys in Australia and in 2001 Red Sky Exploration was founded by the company in order to utilize the survey system as it looked to reduce exploration risk on the continent.

With these resources available to it, Red Sky was able to capture data from airborne exploration of more than 24 million acres of the Darling Basin in Australia.

One of the biggest hurdles facing the company, claims Duncan, is an intrinsic fear of new technologies across the resource sector.

“In the oil and gas industries everyone wants new technology, but nobody wants to be the first to use it,” he remarks. “It seems like 10,000 companies want to be second and part of our challenge is to reach that required level of acceptance.

“When you picture hydrocarbons coming up through a reservoir to the surface, everybody had it in their minds that you couldn’t be that accurate in predicting the location of those hydrocarbons, to source those hydrocarbons, and there have been a lot of different types of exploration techniques used.

“Therefore people have been gun shy about using what we’re offering,” he explains.

Despite this hurdle, Duncan says that the technology can easily be explained and demonstrated in a reasonable way to experts working on behalf of potential clients.

The next step facing the company is the delivery of more sensor units from its contracted engineering design team, which will be installed into aircrafts so it can undertake more surveys.

“As we bring more planes on stream, we’ll be able to move them around the world and start surveying contracts as required,” notes Duncan.

As fewer concerns are raised regarding its innovative techniques and more of its planes enter service, Sky Hunter looks likely to continue its ascent as it provides a time-saving and environmentally friendly service to the resource industries.