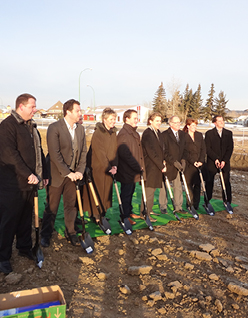 The Sky is the Limit

Edmonton-based and Aboriginal-owned SkyRider Developments is a rising star in land development, project management and construction, with a dynamic and progressive CEO.

SkyRider’s expertise spans residential land development, multi-family condominium construction and development, having managed and/or developed over $200 million in projects. The Edmonton countryside, just west of the city, is dotted with SkyRider projects, including those on the Enoch Reserve, Parkland County, Stony Plain and Lake Isle (not to mention Comox, B.C.).

At the helm of SkyRider is Derek Prue, a former minor league hockey player who grew up in a family highly involved in the construction industry. While still playing professional hockey, Prue oversaw the construction of his first house, getting a taste for the industry. Prue’s appreciation for development grew and found him developing a raw land subdivision in 2000 and a 100-unit building the company is now known for.

“We have done several project management projects in the Edmonton area—our most recent project is 195 units (built in three phases) in Prince Albert, Sask,” says Prue.

A hallmark of SkyRider properties is being the first in upcoming neighbourhoods. “We go into markets that we feel are currently strong but will also continue to grow,” says Prue. “Our most recent location is the Cold Lake region and what we aim to do there is become the developer of choice. The philosophy behind this strategy is it affords great quality location and price, with less dependence on the other external factors like the market and the economy.”

SkyRider is a Canadian success story for more than just its balance sheets. The same tenacity and strategy that helped Prue on the ice has helped him just as much off of it. Business success and accolades notwithstanding—and there have been many, including the recent Fast Growth 50 Alberta, the 2010 Athabathsca University Rising Star, and 2009 Avenue Magazine Edmonton Top 40 Under 40 Entrepreneur—Prue and SkyRider have used their expertise towards a community whose housing needs are the most underserved in the country. Self-described as an out-of-the-box thinker, Prue is merging construction management to the methodology and specialized land rights of Aboriginal Communities.

“We have done several project management projects in the Edmonton area, and recently a 123-unit building right on the West End of Edmonton, located on Enoch Cree First Nations Reserve,” says Prue, following on the success of a 2007, 123-unit condominium project in the same area.

“We do everything from full-ownership to no ownership which a lot of companies do not do. We do project management methodology, which often works really well in Aboriginal communities, right through to joint venture and partnerships—we have a number of different ways of putting together deals and operating.”

Prue believes that many development companies turn a blind eye to Aboriginal communities because those communities have different land title laws than non-reserve land, which can prove complicated for the uninitiated developer. Prue does not fall into that category, and is writing a doctoral dissertation on Aboriginal housing in Canada.

“[The subject] is near and dear to my heart, and this is a part of our company that we want to continue to grow. Working in the Aboriginal communities, it really became clear that the housing is such a huge  problem,” says Prue. “A lot of my contacts in the First Nation and Metis communities stem from my hockey days.

I made a lot of really good friendships and got to experience the on-reserve housing conditions and being something that we as Canadians can’t be very proud of.”

These friendships precipitated SkyRider’s participation with the community development board for the Cree First Nations to solve these plaguing housing issues, starting with non-fee simple property.

“The absence of fee-simple property causes a lot of disparity right out of the gate,” says Prue.

For those who are unfamiliar, the land in Canada is generally owned fee-simple property, which means you have a title which can then be sold. On-reserve or Metis communities do not have fee-simple property. The land is therefore held collectively by the band and in essence still crown property (and cannot be sold).

“That process is evolving,” says Prue, “and we are supportive of ways non-fee land titles can be mitigated, but until then, it is a real setback and inhibits the ability to generate wealth over periods of time,” says Prue.

“In Edmonton, for example, when someone pays their mortgage off, they own that asset and can pass it  on to their children, whereas on the reserve, they can pay it off but they cannot take a line of credit out on it, cannot sell it—there is no intrinsic value there. The other problem is in the general way the housing program is administered through the Aboriginal Affairs and Northern Development Canada.

“A lot of the focus is on the process of developing land on reserves: what is being done with the money, administration, quality control, proper reporting, etc.

SkyRider hopes to use this working model as a template right across Canada.

The company has recently facilitated the signing of an MOU between Habitat for Humanity and the Elizabeth Metis community and is on the verge of finalizing a deal which will be applicable for Aboriginal communities across the country. This will enable an Aboriginal community to initiate a self-perpetuating housing initiative, easing the financial burden on themselves and the federal government.

“And once that happens we will then have a template to speak with Aboriginal communities about this way to resolve the housing problems, and it really removes the Government of Canada from the process which I think is going to be mutually beneficial,” says Prue.

“We are building it into an overall model that we can now promote in a way that makes sense for everyone.”

Skyrider is eagerly waiting responses from the Minister of Aboriginal Affairs and Northern Development Canada, John Duncan, as well as the Assembly of First Nations regarding Canada-wide solutions for housing which include the Habitat for Humanity home-ownership model. “We have the legal templates which can be used for Aboriginal communities on non-fee simple lands anywhere in Canada. Rather than re-creating the work or Aboriginal communities paying for this to be done, we can share the information. We have always felt that sharing information is important to Aboriginal communities, organizations and their interests as it saves on the cost of having professional firms recreate the work and lending to increased coordination and cooperation between communities.”