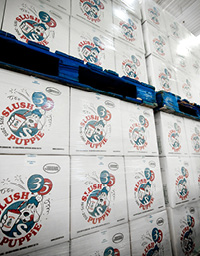 Perpetually rooted in childhood, the iconic Slush Puppie is celebrating 35 years in Canada this year.

The best known and most popular iced beverage in the world originated in the United States and is now enjoyed in more than 40 countries worldwide. In 1975, André Beaudoin brought 10 Slush Puppie machines from a San Diego food fair to his native country, ostensibly starting a Canadian phenomenon that has delighted Canadians young and old ever since.

The product lines have expanded since then, but the recipe for Slush Puppie remains the same; giving customers a refreshing and unique treat and retailers a brand name, a turnkey product that attracts customers.

It may be surprising to some to learn that Slush Puppie Canada is a family-owned business. André Beaudoin’s son, Jean-Rock Beaudoin, is now President and CEO of the company, having cut his teeth in the business since he was 13 years old. “Who wouldn’t want to be the President of Slush Puppie Canada when you are a child?” asks Beaudoin. “Slush Puppie is about the customer service aspect and about fun. When I was a kid I saw that.”

Slush Puppie Canada is headquartered in Gatineau, Que., in the National Capital region. The company has thousands of sales locations in Quebec, Ontario, the Maritimes, and Nunavut. Customers are equipped with all that they need to produce Slush Puppie’s patented unique sugar formula, freezing process and paddles to produce the slush and keep it at the right temperature and ideal texture.

“[Slush Puppie] draws in people and draws in higher profits margins. And if anyone has any problems whatsoever, you call us up and we are there,” says Jean-Rock Beaudoin, who oversees that the product is always refreshing, affordable, and conveniently located, to keep the company as the leader of iced beverages in Eastern Canada.

Vision for the next 35 years

Slush Puppie Canada is taking the 35th anniversary as an opportunity to redefine the company’s vision. The company has found great success with engaging customers in social media campaigns and is not overlooking the significance of an online presence. Slush Puppie Canada’s website has games and prizes as well as links to its Facebook  pages geared toward attracting the younger demographic.

“Those are the people who spend the most time online, so it is logical to go towards them with an emphasis on our online marketing. If you remain top of mind, fun  and cool, your sales will be there.”

Slush Puppie Canada has planned a large publicity campaign for its Quebec markets to “give ourselves a good push to make sure we remain top of mind  and we are there for the next 35 years,” says Jean-Rock Beaudoin. “Every spring we have a nationwide promotion on our 775ml cups, where consumers can win instant  prizes by simply looking under the rim. Also, this year we invite all of our consumers to go on SlushPuppie.ca where there are games and every week we have winners of Slush Puppie fun promotional  items. It’s a way for us to create excitement, and this is something most of our competitors don’t do much of or don’t do at all in the slush world. We have been promoting the brand with those prizes for years and years now.” Also,  in order to get retailers  excited about selling Slush Puppie, Slush Puppie Canada gives out several trips down south for two, every year to its retailers. “Its our way to say thank you for supporting Slush Puppie.”

“We feel it is important to support organizations that help our future generations,” says Beaudoin. Being a company that serves a younger demographic, Slush Puppie Canada is keenly aware of the positive impact it is capable of making on the country’s youth. “We believe at Slush Puppie that one of our responsibilities as a corporate entity is to give back to society by giving time and or  money to people or organizations that help develop our youth in sports, recreation, and culture,” he continues. Slush Puppie Canada accomplishes this by participating in projects with the University of Ottawa, University du Quebec en Outaouais, etc., by supporting sports ( Quebec 2010 summer games, Quebec winter games 2011), and by supporting cultural events such as the Film Festival of Outaouais 2011.“We strongly believe that it is important to participate and support the communities in which we operate our businesses and sell our products. It simply makes sense and everybody wins.“

Despite a dedication to its Original Slush Puppie drinks, the company does measure public demand for new products. Hearing parents’ requests for healthier alternatives for their children, Slush Puppie Canada recently developed an apple juice-based Slush Puppie drink called Slush Puppie Plus. Its nutritional properties (vitamins C and B1, folic acid) have drawn the attention of schools and hospitals, which are now serving the drink. It’s the first iced beverage to earn the ‘Health Check’ label from the Heart and Stroke Foundation. Slush Puppie Plus also meets the criteria of the Wellness-Oriented School Program of the Ministère de l’Éducation, du Loisir et du Sport du Quebec. “With all the attention on health and wellness, to remain No. 1 in our market we had to come out with a healthy alternative,” says Jean-Rock Beaudoin.

Slush Puppie Canada has remained synonymous with summer because it has stayed true to its promise of delivering refreshing and delicious flavours. In its traditional drinks category, new flavour Mango Pineapple has been garnering fans since its unveiling last year, and Sour Green Apple will surely be a hit when it’s released this spring. “Orange is my favour flavour,” smiles Beaudoin, while nationwide, Cherry and Blue Raspberry hold the top spots.