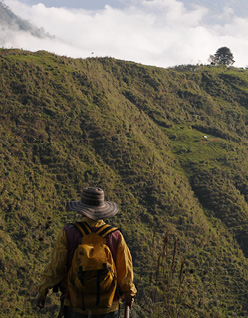 With aggressive drill programmes in place at its two vast and largely unexplored sites in Colombia, this year could prove to be pivotal for Toronto-listed Solvista Gold Corporation.

The high price of gold combined with a stabilising political situation have turned Colombia into a target for many hungry exploration firms looking for untouched treasures.

One such entity trying its luck in the north of the country is gold exploration firm Solvista Gold Corporation (TSX-V: SVV) (“Solvista”)—owner of two potentially resource-rich properties near the city of Medellín.

In Caramanta and Guadalupe, this Toronto-listed company has two large exploration projects under its remit.

Solvista has plans to complete aggressive drill programmes at both project sites throughout 2012 and beyond.

The company was incorporated in Ontario, Canada, in 2010 following a joint-venture agreement between Norvista Resources Corporation and Bullet Holdings Corporation, the parent company of Colombia-based Grupo de Bullet S.A. It raised approximately $15 million dollars and a subsequent $2.7 million dollars in a non-brokered private placement with Kinross Gold Corporation, resulting in a 9.9 per cent full-diluted stake in the company.

As a result of the agreement, Solvista took on the 100 per cent ownership of both the Guadalupe and Caramanta projects, on which initial work completed by Grupo de Bullet had identified a number of exploration targets that are now being followed up aggressively by Solvista.

“Colombia is a business-friendly location and is a place where gold exploration can take place without any serious risks,” remarks Miller O’Prey, Solvista’s president, CEO and director.

“Both properties were chosen as we were looking for projects that had good geological potential for large gold systems, as well as for their non-technical consideration, such as any environmental restrictions,” explains O’Prey.

“The sites are below the 3,200 metre level, there are no national parks within the areas and there are no indigenous community reserves within either project,” he adds.

O’Prey says that both projects are connected to major distribution centres and trading hubs by a relatively good infrastructure system and both are within reasonable proximity of the Pan-American Highway.

“Both properties are placed on paved roads, so we can drive to both directly from Medellín, and we have good power at both sites with a couple of hydro-electric dams nearby,” he notes.

Despite being listed on the Canadian markets, the company is very much a physically entity within Colombia’s boarders, with O’Prey and the vast majority of the company’s staff based full time in the country.

O’Prey describes Colombia as one of “the few underexplored jurisdictions in the world” with real potential for significant discoveries.

“I think the reason that our previous incarnations originally looked at Colombia is the great opportunity that its offers,” says O’Prey.

“It has some of the best core potential in Latin America and is historically one of the world’s largest gold producers.

“It is a country, which due to more recent social problems, has never really been explored by modern techniques or methods and has never been looked at in a systematic fashion in the way Chile, Peru and to a certain extent Ecuador, have.

“There’s no doubt in the gold potential of Colombia, and I think it’s just more a matter of time before companies who are exploring in the right fashion begin to make discoveries here,” he adds.

Solvista began drilling at Guadalupe in January of this year as part of its two-year exploration programme of the property.

While the company is currently undertaking the first drill programme at Guadalupe, O’Prey says that with approximately $12 million in the bank there are plenty of funds to allow for further exploration of the property, should the first part of the programme not provide sufficiently interesting results.

“Moving forward we want to be drilling several more targets before the end of this year and throughout next year at the property, and hopefully a couple of these sites will prove to be of economic interest,” O’Prey remarks.

“It’s taken the drill contractor a little bit longer than we had initially hoped to get up to speed with all the necessary parts, spares and supplies, but so far we’re happy with what we’re seeing.”

While it has yet to receive any results from the drilling programme, the large size of the property combined with what it has discovered during surface exploration, has left the company understandably excited about its potential.

“We’re not going to set our expectations too high in terms of finding a mine in the next couple of months,” O’Prey notes. “But it’s a very large project and from analysing just 10 per cent of the project site we’ve been able to define some large drill targets.

“Our current drill programme will provide us with a better understanding of the geological features and the mineralisation style of the gold.”

Solvista is also remaining optimistic about the potential of its Caramanta project where plans are in place to conduct an initial 4,000 metre, up to 26-drillhole programme.

“We hope that within the next two years we will have drilled at least three or four different target areas on this property, which should give us a better chance of finding something of economic interest,” remarks O’Prey.

While drilling has yet to get underway, the company has already identified three target areas for the first drill programme at the smaller of its two properties.

“We’ve only explored about 10 to 15 per cent of the total land package and, like at Guadalupe, the plan is to continue exploring while we commence drilling,” says O’Prey.

“We have more-or-less selected the drill sets so we know where we want to drill first.

“We made the applications to the environment authority for the water use and water return permit in December and, as this normally takes about three months, we hope to be drilling in the second quarter of this year,” he notes.

“Recently we have identified on the surface of this property at least three mineralised porphyry gold-copper systems, similar to what a number of other companies in the district have reported, and therefore we’re looking at a multi-million ounce potential.”

With Solvista finding itself in an ever more comfortable position operating in Colombia the future is certainly looking bright for the explorer.

“As long as the political and economic situation continues as it is we will continue to be very happy to be working in Colombia,” says O’Prey.

“I think we have laid the foundations for a very interesting 2012/2013 and we’re very excited about the drill programmes we have on their way at Guadalupe and the plans for Caramanta.”

While O’Prey remains cautiously optimistic, there can be no doubt that Solvista has become one of a handful of must-watch exploration companies currently operating in Latin America.