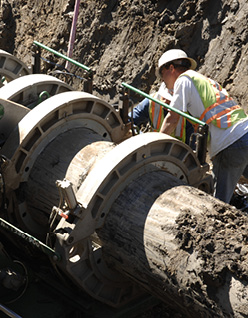 Exciting plans in the pipeline

Without managing wastewater, where would we be? The answer is, up the proverbial creek. No wonder the South Red Deer Regional Wastewater Commission has made good progress in transforming the standalone municipal wastewater facilities of it member municipalities into its regional wastewater operations.

Members of the Commission include the towns of Olds, Bowden, Penhold and Innisfail, and the counties of Mountain View and Red Deer. These are municipalities from the Olds and Mountain View County area to the south, leading north towards the City of Red Deer.

The Commission was originally formed after Alberta Environment informed the municipalities to the south, west and north of Red Deer that they would need to pipe their wastewater to the city’s wastewater treatment plant, a facility that will ultimately become the regional hub for this activity. Realising the scale of the task the six municipalities convened—initially meeting as a committee—and put the necessary paper work together to form a commission. The application was approved by the Province in April 2008, signalling the beginning of an exciting chapter of modernization.

The objective of the Commission is was to design, construct and operate the regional wastewater transmission system that collects the wastewater from the member municipalities, and transfers it to the City of Red Deer’s wastewater treatment plant. The south leg of the project has an estimated cost of C$107 million dollars with an additional C$40 million for upgrades and expansion the City’s wastewater treatment facility. The estimated cost for the entire three legs of the project is nearly C$300 million.

Early on in the proceedings it was identified that the anachronistic systems on the south Red Deer leg needed the most urgent attention and therefore this is where the schedule of improvements began, with a target completion date of 2015.

The funding for 90 per cent of the south leg programme will come from the province’s ‘Water for Life Strategy’, while the remaining 10 per cent is the Commission’s responsibility.

The first phase that received funding from the province was the detailed design of the entire project, allowing the Commission to concentrate on technical preparations, functionality and product sourcing. Financing for ‘Stage One’ from Innisfail to Penhold followed, involving the laying of pipeline stretching 27 kilometres.

An additional part of this phase is the construction of a lift station at Innisfail which will begin pumping wastewater later this fall. This is essential to the operation as it is impossible to rely on gravity alone to make wastewater move, especially in low areas. The station will also manage the wastewater odour.

Another element of the project approved for funding and currently being undertaken is the Olds to Innisfail section where the design for the 36 kilometres of pipeline and and lift stations constructed at both Olds and Bowden is underway with construction projected to be completed by December 2012. This will enable the Town of Olds to divert up to 50 per cent of their wastewater into the regional system until the full regional system is operational in 2016. There has also been progress in getting the land in place for the 29 kilometres of pipeline from Penhold to Red Deer stage of the project.

An agreement with the province allows the system to be designed and built to accommodate the volumes of wastewater to be generated over the next 25 years, ensuring that the system can handle the inevitable growth of the communities. With this considered the Commission was determined the current flow projections of each of the communities and projected the future flow based on a 2.5 per cent annual growth in population. This was a vital calculation in determining the 25-year capacity of the regional wastewater system.

Despite the inconvenience of a global economic crisis, the Commission’s Chairman, Dennis Cooper, has been pleased with what has been achieved so far.

“The overall system incorporates over 92 kilometre of state-of-the-art pipeline, serving a growing population of thousands. There will also be five new pumping stations and we’ve taken over three from an existing line running into the city. The goal right now is to move 100 per cent of the wastewater from all the municipalities to the City of Red Deer within four years,” he said.

The Commission has also committed to making sure that rural areas have a access to the facilities. “We have solved accessibility issues by building receiving stations so that acreages, and other developments that need to deal with their wastewater, can haul their loads to the stations where trucks can dispense it straight into the regional system,” Chief Administrative Officer, Dale Withage enthused.

Once the infrastructure is in place this well-orchestrated organisation can look forward to tackling wastewater with gusto and, while the name South Red Deer Regional Wastewater Commission doesn’t exactly roll off the tongue, its regional wastewater system will be flowing very nicely for the next quarter of a century and beyond.