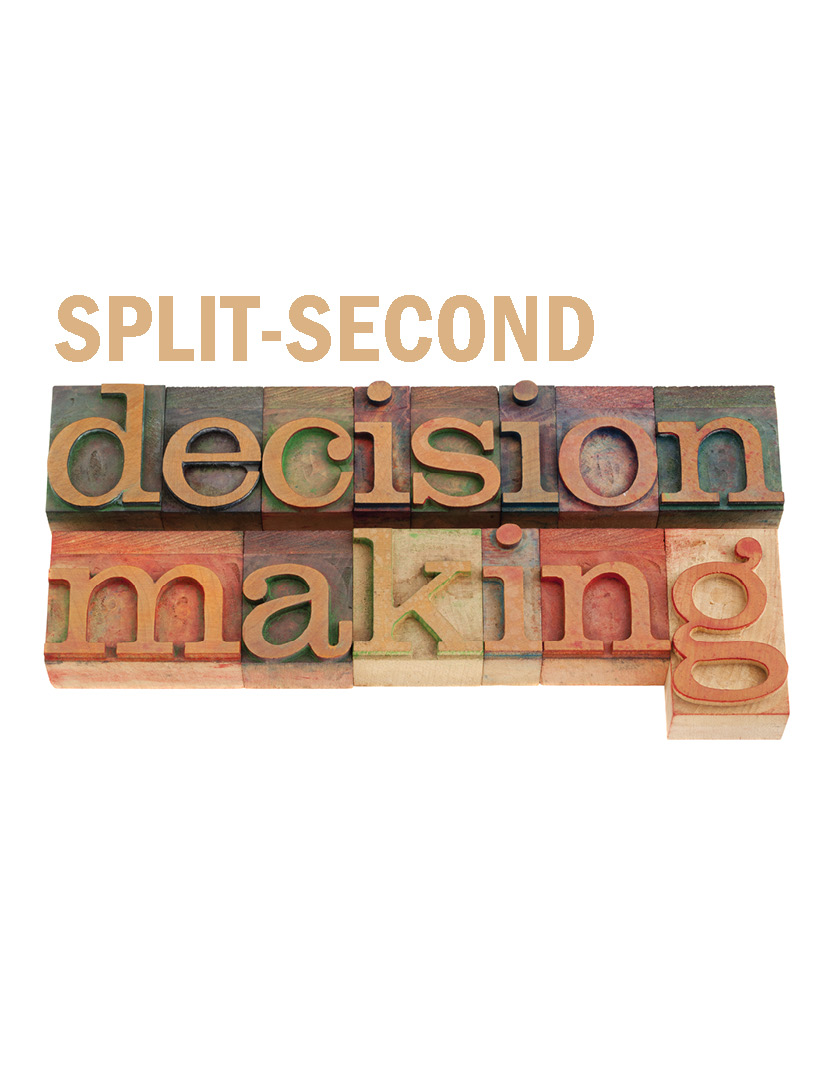 Conventional wisdom suggests that decisions should be considered. They should be well thought out, based on clear thinking, use clear rationale and a clear understanding of the expected outcomes. We were taught this by our parents, our teachers, and business leaders. We have read books about decision making processes, we have attended courses teaching us to weigh up all the options, and we have likely spent more time thinking about decisions than actually making them! So, why then am I such a big advocate of SPLIT-SECOND DECISION MAKING?

Today we have ready access to so much information, more than any generation before us, and quite simply it is slowing down rather than speeding up our decision making. Just think how many times you have surfed the internet and “invested” hours and hours and felt you did not get anywhere. In fact you likely found so much information that it actually played against split-second decision making (ssdm). I think it is apparent that over the coming years, and the ever advancing use of technology, we will have access to even more information, quicker and in more formats than ever before. The information overload challenge is growing.

There are many benefits of applying ssdm in everyday life. Consider how much your will get done in a day. Consider how you will stop worrying about having to make that decision. Consider the potentially considerable, positive energy that can be released when a decision is made. Whether your at the local coffee house and deciding if you want a bottle of water or a tall colombian supremo decaf  latte, or making a decision which business proposal is the best option, ssdm can free up time for you to smile again. But does it really make sense to be wreck-less and not spend the time weighing up options, discussing, debating, checking, thinking, feeling, … ?

Of course it is not appropriate to apply ssdm for every situation since, for example, if you are a nuclear scientist you want to make the right decisions and take your time making them! However in my experience a large proportion of decisions can be made in a split-second, and the majority will, over the long haul, likely prove to be the correct ones. So why is that the case? And why do we have such a national sport called “taking too much time to make decisions”? Here are some considerations:

Whether its fear-based, laziness, lack of interest, or whatever(!), procrastination is the biggest culprit against ssdm. Procrastination becomes a stronger trait the more it gets used, and becomes difficult to break out of even for the most simple of decisions. In fact most people don’t notice the creep of procrastination in their lives since it happens gradually over many years. Try and catch yourself in the moment and simply ask “can I make a split-second decision right now?”

We all want to know something about the future, or everything about the future. So we think about it, ponder over it, and try and calculate all the myriad of different outcomes that “could” happen! Unless you have a direct line into God, or are a clairvoyant or know some way of reliably predicting the future, it is best not to spend too much thinking about it. The present tends to disappear quickly when too much time is invested thinking about future “what-if’s”. Instead try and enjoy the moment, the Here and Now, and trust that the future will be both positive and exciting for you.

If you believe more in the concept of scarcity than abundance, then you will likely be much more cautious and calculating in how you make decisions. This will likely slow down your decision-making time considerably! Have you noticed that the people who think about and are most worried about money, are the ones that are more likely to have money challenges. Lives, especially in this country, are full of abundance and opportunity. Tune into abundance and you will surely attract it.

Someone wise once counselled me to “make mistakes fast because then you have enough time to fix them!”. For many situations this is very sage advice. How many times have you delayed making a decision only to realize that the options are dwindling, and if a mistake is made, you have run out of time to fix it. The only option then is simply to accept the outcome, which is not always pleasant. So think about making split-second decisions, and if any mistakes are made then you still have time to make amends.

The Book of Excuses:

Everyone has developed over the years their own personal “Book of Excuses”. The set of thoughts, perceptions and beliefs that lead to making an excuse not to do something. Recently I decided to get up at 5.30am every day to write a series of books with my writing partner. Everyday when the alarm rings at this unearthly hour, my mind immediately begins to delve into my personal Book of Excuses. “I forgot”, “my alarm was muted”, “I think I have the flu”, “I couldn’t get Skype working”, …we all have them, and the reality is that most have been thought (and used) many times before by many people! Consider burning your personal copy of the “Book of Excuses” by embracing split-second decision making.

The power of your gut-feel:

This has many names including subconscious thinking, intuition, connection to the universe, etc. The reality is that today we are using our gut-feel less than ever before. But yet it is as powerful as it always was. How many times have you personally said “if only I had followed my gut-feel things would have been better”? Learn to trust your gut-feel, it has a power that is beyond explanation. The more you use it the more you will trust it, and the more you trust it the more you will use it!

The best marketing slogan of all time:

“Just Do It!” The guys at Nike knew a thing or two in my book. They realized that to sell more of their products they had to convince people they could do it, and then simply to “Just Do It!”. Its the split-second decision about going to the gym, heading out to jog around the block, or simply getting back to exercising again. Nike could have had a longer slogan “Don’t think about it, Just do it!”.

Joe Connelly is co-author and co-founder of The Nine Prophecies Inc., a worldwide training and coaching organization geared towards enabling positive change in people’s personal and professional lives. Joe can be reached at [email protected], or