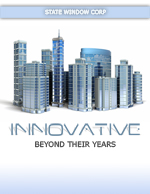 Innovative Beyond Their Years

For such a young business, Ontario-based State Window Corporation has already proven they have what it takes to last. After only three years, State Window has built a solid reputation and an even better product line. To be fair, the company has had some help; it’s a division of 15-year-old Decora Window & Door Systems, the low-rise residential side of the windows industry and a successful model to emulate. In fact, Decora was just awarded the 2009 Vaughan Business of the Year in the Manufacturing and Technological Advancement Category. State Window Corporation services the high-rise construction industry, working on large-scale residential, commercial and institutional projects. Combined, Decora and State Window employ over 300 people at a total of three plants, occupying over 180,000 square feet.

Being a new company brings the fresh air that the industry needs. Christopher Liberta, State Window President and CEO, explains their competition is working with systems that were developed about 20 years ago.

Over the years, building codes have changed and standards have risen,” says Liberta, “yet our competitor models are not reflecting these ideals. Band-aid solutions to fix problems and meet these higher standards have been the norm for many of our competitors, whereas State Window Corp. has taken on the active process of designing a new window system.”

“State Window started from scratch. When Liberta and long time business partner Robert Brunino (Robert is the president of Decora Window and door systems) decided to pursue the high-rise window industry, They hired and introduced as a business partner George Douramakos, who is considered by most to be the leader in the high rise window industry. They then visited building envelope specialists and some of the leading architects in Toronto. “We wanted to get their feedback on the biggest problems facing the industry today,” says Liberta. “Their advice helped us design our windows to solve the issues they saw. So far, the windows are performing beyond their and anyone’s expectations.” One of the biggest concerns State Window wanted to address was leakage problems. Twenty years ago, normal buildings had 5’ x 5’ windows that were surrounded by brick, but now a lot of the windows in high-rises are enclosing the entire building.

“The systems that were designed decades ago weren’t built to deal with water leakage; they don’t shed water,” Liberta continues. “Our competitors have a face-seal system that goes on the exterior part of the aluminum. They put sticky tape on it and fasten the glass to the tape. Over time, however, the tape degrades and water starts to get into the building.”

“What State Window has done is create a true unitized rain-screen system,” he continues. “They have gaskets on both sides of the glass so when water comes in, it is channelled through a multi-chamber leakage system to the exterior.”

Their design works well in LEED projects; in fact, they can offer points. Although LEED wasn’t as popular when State Window first started, it has become very important to the company. “The way trends are going with the environment, we’ve been concentrating on how to improve all aspects of design,” Liberta maintains. “We’re interested in things like thermal performance and how we can use recycled materials.

Valuing employees
It’s not just the product that State Window is committed to; it’s also their valuable staff. That’s why the company has implemented the Continuous Improvement Program. Sometimes the upper management don’t see the obstacles that prevent processes from being more efficient, because they are removed from the production floor. With the Continuous Improvement Program, the employees who are exposed to those issues on a daily basis have a chance to give input on how to improve steps in production.

“The program encourages employees to come up with ideas and find ways to implement them,” explains Liberta. “So if someone finds a way to make something faster, he or she can go to the manager, get it approved and then make it work on the floor. What that does is give the employee some agency and help them feel like their ideas are valuable to the company.”
State Window also has a profit-sharing program that none of their competitors have, which is a powerful incentive option that changes employees into team members. In companies like this, profits tend to be higher since employees have a vested interest in the success of the business.

Downturn or not, State Window is well-positioned to succeed
Like most companies in Ontario, State Window has felt the impact of the economy in one way or another. A lot of the buildings that were supposed to go ahead, for example, have been delayed. Liberta says that they’re quoting a lot less and that developers are bringing them back to the table and asking about ways to save costs. It isn’t all that surprising when you consider that windows are one of the most expensive items on a building. Where the State Window would normally be tendering against two or three companies, it’s now usually six or seven.

“We used to have a full-time estimator here, but he’s been moved to the engineering department,” Liberta sighs. “It’s not a fulltime job anymore.”
In the midst of a pinch, the company is doing its due diligence to keep ahead of the game. “We’re more cautious with our spending and we purchase today for tomorrow,” he continues. “We’re also looking for developers with a proven track record; we’re not signing contracts with anyone who hasn’t proven they pay on time.”

It’s not all doom and gloom. In fact, State Window is doing well for the time. “Our business is hopeful for the future,” Liberta beams. “We’re booked solid for 2009. In 2010, we’ve got a lot of projects for the beginning of the 1st 2 quarters scheduled. We are continuing to purse work for 2010 and 2011.

Looks like the future will be a long one because the company is well-positioned to succeed. One of the goals that will certainly help them on their way involves solar panels.

“We’re looking at a joint venture with a solar panel company,” says Liberta. “We’re in talks with them right now and it looks really good. It is likely that, in the future, we will be putting solar panels into our products. After that, we’re looking at growing the company and branching out into different products, railings, manufacturing our own doors.”

Expect to hear a lot more about this company in the future. For more information, visit http://www.statewindowcorp.com/