CBJ — There was a time when Magna International founder Frank Stronach and Belinda Stronach seemed like they had the happiest father-daughter relationship anyone could ask for, both personally and professionally.

Those days are gone.

One of Canada’s richest families has confirmed that it is embroiled in a legal feud between famous father and famous daughter.

Frank Stronach, the 86-year-old billionaire, is suing his 52-year-old daughter — as well as other executives — are being sued to the tune of $520 million, with the patriarch of the family arguing that he was forced out of the business he built and that the family’s personal fortune has been mismanaged.

The following is a release from Frank Stronach’s legal team:

“Frank and (wife) Elfriede Stronach regret having to commence proceedings in the Ontario Superior Court against their daughter Belinda, Alon Ossip and others. They only did so as a last resort, after having made considerable efforts over a period of almost two years to resolve the matters at issue on a consensual basis.”

In addition to helping her father run Magna, Belinda Stronach was also a one-time PC Member of Parliament. 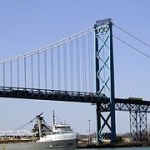