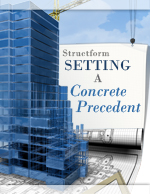 For more than 40 years, Structform International has maintained a solid reputation for offering a complete range of concrete framework services. No matter how big or challenging, Structform can handle any institutional, commercial or industrial (ICI) project you can throw their way.

The company does three things. Its main business is to build concrete form work. Structform also does cement finishing, adding specialised finishes on concrete. Last, the company performs concrete restoration for buildings that are falling apart.

In order to control quality, the company does all of its work in-house, including fabrication of forms. Owning their own equipment means that Structform can fulfill both equipment and labour contracts to meet client needs. The company has the ability to oversee all stages of the concrete work, from start to finish.
With its headquarters in Toronto, Structform does not limit itself to the Greater Toronto Area. Lou Bernardi, President of the company, explains that his team does work globally when the need arises. “Right now, we’re doing work on a 52-storey office building in Calgary,” he explains. “And we have been in doing projects in Bermuda for the last 12 years, as well as Nassau. We move around.” Move around is right. For every out-of-town project, Structform transports its equipment to the job site.

What sets Structform apart from the competition?
“We pride ourselves on the quality of our work and timeliness,” says Bernardi. “We adhere to the schedules, which is really important in this business. Aside from that, the best thing we have is our relationship with our clients. We value our relationships, which is why we keep getting repeat work with the big contractors in the city.”

Repeat work means a good reputation—a must in the building industry. Structform makes it a point to get management gets involved with any problems on the job site, showing commitment to resolution and adding a personal touch in servicing the clients.

Portfolio
Structform doesn’t really need to elaborate on how good they are. All you need to do is review their project portfolio to understand why they are sought-after contractors. Here is a mere sample of the kinds of projects that Structform is asked to be a part of.

Air Canada Centre—Structform worked on the multi-purpose entertainment facility and 19-storey office building for the Maple Leafs and Raptors sports teams. With PCL Contractors as project managers, Structform provided cast-in-place concrete for the arena and unique hanging supports that carry the precast seating. Structform completed its $12-million contract in a record eight months.

Princess of Wales Theatre— As a complete turnkey project for Structform, they built the total project from footings to roof. Providing the complex design-build for the $7-million contract, they came in ahead of schedule.

Metro Toronto Convention Centre—This $13-million project for EllisDon was challenging. The hotel portion of the project was built at an incredible pace—one floor every three days—and the ballroom ceiling had a 120-foot clear-span, without any columns.

Up from here
For the last four decades, Structform International has seen changes in safety standards, technology and the economy. Adapting to suit each transformation in the industry, the company has managed to keep well ahead of the game.

Right now, Structform is focused on raising up a new generation of dedicated workers. “Our forming systems have improved and so has our equipment, so now we’re focusing on improving the labour part of it,” Bernardi laughs. “I’ve noticed a diminished work ethic lately. So we’re working to train new employees to work like our company has always worked. We have always provided quality and assurance to our clients. And we want to pass that on.”

As for the future and the economic downturn, Bernardi doesn’t seem too concerned. “We’re going to keep going, which is the main thing,” he says. “The economy has affected us a bit, but we have some pretty major projects that will carry us through the next year or so. We’re in a good position because people need buildings, and they are coming to us because of our reputation.”