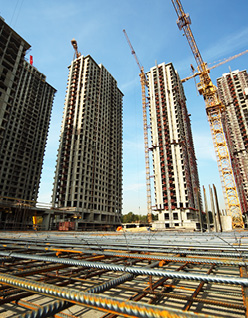 Structform International does solid work, not to mention its concrete restoration business.

Structform International works with, and has much repeat business from, many of the Greater Toronto Area’s largest general contractors. The company’s services include concrete restoration, concrete formwork, and contracting.

“We do very high quality work and we do it on time, we always meet our commitments. We’re here to please the owners of the general contractors,” Bernardi commented.

In an ever-changing industry, Structform International has prepared to enter the next transition phase of the business, handing the reins to the up-and-comers ready to write the next chapter of the Structform International story. Bernardi summarized, “We’re all very proud of our company and we look forward to carrying on for a few more years. We have a younger crew that is up and coming that will take over the reins for the people such as myself and carry on the tradition.”

But before entering that transition phase, Structform International has also prepared itself with some big projects in recent years. Most recently, Structform International has completed many projects within the Greater Toronto Area, including its involvement in the new waterfront campus of George Brown College, as well as the Great-West Life Tower at 18 York, both major projects for the company.

Other projects include its work with Toronto’s St. Joseph Hospital, the Vaughan Subway Station, as well as a 47-storey hotel in Simcoe, Ont., all large projects that will see the company through the next year or two. Structform has grown from large commercial projects, as it is now also involved in the institutional and industrial sectors, as well as some recent residential projects.

In the past, Structform International has provided its expert services at a number of area projects, including Toronto’s Princess of Wales Theatre, Air Canada Centre, Metro Toronto Convention Centre, the Greater Toronto Airport Authority, and nearby Mississauga’s Square One Shopping Centre.

In another move highlighting its focus on the future, in recent years Structform International has worked to promote LEED certification, an element highlighted in many construction projects today. Structform International subscribes to different levels of LEED requirements. Said Bernardi, “We co-operate on every [LEED] job that is required. We do what is needed to maintain our LEED status qualifications.”

Because of its strong values, and abundance of work, Structform International avoided much of the dip of the recession, something Bernardi attributes to the company’s involvement with a variety of public-private partnership projects, of which many were hospital projects. Structform International is also proud that it has achieved its accomplishments without financial difficulty or restraint.

“Our jobs usually last one to two years so we get enough work to carry us through these recessionary periods,” Bernardi said. “Because we do the larger work, we are able to withstand the pressures of these recessions and we have for a long time now.”

The definition of a Structform International project begins with strong management from the top, an attitude that is then illustrated with all employees throughout the organization. As such, many employees have stayed loyal to the company over the years. Structform International has formed great client relationships because of its excellent and timely service. Bernardi added, “As people retire, our young people must deal with the younger people in the other companies, so that is our goal.”

“When we say we’re going to perform a job, we give our promise from when we negotiate the job and then we rely on our field staff and they do excellent work as they always have,” Bernardi concluded. “Now we’re making sure that the company survives with the young people learning to step into our shoes and carry on the good tradition that we have had over the years.”