Study Reveals Jerks Often Get the Jobs… and Better Pay 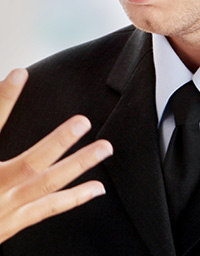 If you’ve ever ventured out beyond the secure confines of your home, it’s all but guaranteed you have come across numerous aggravating situations of being locked in the presence of a narcissistic jackass; the obnoxious, self-centred “me-first” creature who doesn’t notice the scorn and contempt emanating from others because they’re far too wrapped up in their own self-admiration.  Jerks – the people we love to hate.

Here’s another reason to dislike such self-absorbed humans.  A recently completed study, soon to be published in the Journal of Applied Social Psychology, reveals that success in a job interview, and even how much you are paid, often depends on how much you like yourself and by extension how much you enjoy talking about yourself.

Lead researcher Delroy L. Paulhus, Bryce G. Westlake and Stryker S. Calvez, all from of the University of British Columbia, and Peter Harms, assistant professor of management at the University of Nebraska-Lincoln, each co-authored the study and came to the conclusion that narcissists fared much better in simulated job interviews.  So why do these types of people seem to have a leg up on the competition when it comes to succeeding in job interviews? The key factors in their favour include such traits as being able to effectively promote themselves through extensive discussion and a perceived higher level of expertise on a wide range of topics.  The key word being “perceived” as oftentimes their statements come up well short of the truth.

“This is one setting where it’s OK to say nice things about yourself and there are no ramifications. In fact, it’s expected,” Harms tells CBJ. “Simply put, those who are comfortable doing this tend to do much better than those who don’t.”

The researchers split the study into two sections.  In the opening phase, 72 people were videotaped in a simulated workplace environment.  Without surprise, narcissists could be seen self-promoting themselves; but an interesting dynamic occurred when expert interviewers began asking tough questions.

While the so-called normal individuals backed off when challenged, the narcissists within the study group went on the offensive in an effort to solidify their case.

“When feeling challenged, they tend to double down,” Harms said. “It’s as if they say ‘Oh, you’re going to challenge me? Then I’m not just great, I’m fantastic.’ And in this setting, it tended to work.”

During the second phase of the study, Harms and his fellow researchers had 222 people rate videos of applicants with much the same job skills, but greatly differing degrees of narcissistic personalities.  Those doing the rating consistently gave higher marks to those who went on the offensive, including mannerly tactics such as gesturing and smiling.  In other words, modesty got applicants nowhere.

“This shows that what is getting them (narcissists) the win is the delivery,” Harms observed. “These results show just how hard it is to effectively interview, and how fallible we can be when making interview judgments. We don’t necessarily want to hire narcissists, but might end up doing so because they come off as being self-confident and capable.”

But are narcissists really better workers, or merely more effective talkers with a higher-level of outward self-confidence?

“On the whole, we find very little evidence that narcissists are more or less effective workers,” Harms confirms.  “But what we do know is that they can be very disruptive and destructive when dealing with other people on a regular basis. If everything else is equal, it probably is best to avoid hiring them.”

If nothing else, the study should provide a wake-up call on the importance of having the proper interviewer who is able to decipher between what is real knowledge and what may just be false bravado passed off as knowledge.

It was quite the intensive effort to get the final results all put together with the group gathering data for six months and then using raters to test it over the next two years.

“It took a long time to get the all the transcriptions and coding done because we videotaped these people and had them rated under various conditions,” Harms noted.  In fact, the study was so long in its completion, when it began Harms was still at the University of British Columbia with his other three co-authors.  “I was the one who got the data and they ended up analyzing it, so they did the heavy lifting.”

Harms and his co-authors have garnered quite a bit of attention for their work in the past including a study last year called Dark Personality and Leadership and trainability, covering such things as narcissism, psychopathy and passive aggressive people and what types of personalities they have, especially in leadership positions.  This particular study received air time on CNN and the BBC.

Paulhus, the lead author on this project, has been studying narcissism for decades and Harms was a one-time student of his in school.  Something that has always intrigued Paulus has been trying to determine the pluses and the negatives of things, such as when are good things bad and when are bad things good – somewhat of a double-edged sword of psychological phenomenon.

People had often speculated that narcissists would do well in interviews, where a high level of outward confidence is necessary in order to be successful, but nobody had ever actually tested the theory – until now.

“Any situation that lasts only about 20 minutes, they (narcissists) have an advantage,” Harms tells us.  “They tend to be charming; they dress better; they are more at ease in conversation with new people – all because they’re more confident.  It’s after that first 20 minutes when they become obnoxious and you realize they may be lying and then you’re stuck with them.”

“They also have a tendency to put others down, and you don’t get that in the interview because you’re asking about them – and that’s their favourite topic. ‘Tell me about yourself’ is something they love to do,’” laughs Harms.

The problems begin afterwards when there’s prolonged interaction with co-workers that cracks in the seams become far more evident.

Have a quick look around your workplace – any matching descriptions?