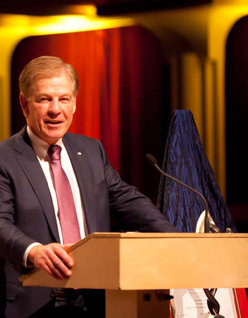 Richard L. (Rick) George, OC, president and CEO of Suncor Energy Inc., has been named the recipient of the 2011 Distinguished Business Leader Award (DBLA) by the Haskayne School of Business (University of Calgary) and the Calgary Chamber of Commerce.

Since 1993, the DBLA has recognized outstanding leaders in the Calgary business community, honouring those whose exceptional demonstration of vision and leadership, sound business sense, and commitment to the community has marked them as role models for future generations of business leaders.

Rick George has been president and CEO of Suncor since 1991 and has been with Suncor and its predecessor companies since 1980. Under his leadership, the company has grown from a valuation of $1.2 billion in 1992-93 to its current market capitalization of more than $60 billion, making it Canada’s largest energy company. During his time at the helm, George has been instrumental in the formation of the Suncor Energy Foundation. Together, Suncor Energy and the Suncor Energy Foundation have strategically invested nearly $110 million in charitable and non-profit organizations across Canada and internationally.

In addition to serving as a director on many boards for both private and not-for-profit organizations, George has been recognized with multiple awards for his accomplishments. He was named a Nation Builder of the Decade by The Globe & Mail in 2010, inducted into the Canadian Petroleum Hall of Fame in 2008, named Alberta’s Business Person of the Year by Alberta Venture in 2001, presented a Canadian Business Leader award in 2000, and named Canada’s Outstanding CEO of the Year in 1999. In 2007, he was appointed an Officer of the Order of Canada for leadership in the development of Canada’s natural resources sector, for his efforts to provide economic opportunities to Aboriginal communities, and for his commitment to sustainable development.

Rick George will receive the DBLA award at the 19th annual gala event, taking place Tuesday, June 14, 2011 at the Jack Singer Concert Hall in EPCOR CENTRE for the Performing Arts. Gala proceeds will create a scholarship in his name benefitting a Haskayne School of Business student who demonstrates similar talent and vision. As have previous recipients before him, George will engage with Haskayne faculty and students to help bridge the gap between management education and management practice.

The Haskayne School of Business and the Calgary Chamber of Commerce are pleased to partner with EPCOR CENTRE for the Performing Arts and Business in Calgary magazine to produce this year’s event and showcase George’s accomplishments, and were further supported by generous sponsors KPMG, the Chartered Accountants of Alberta, and RBC Capital Markets.