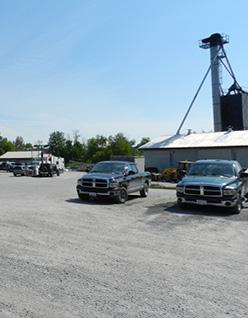 Formed in 1950 as a full service agricultural co-op, Sunderland Co-operative Inc. works to improve the profitability of its farmer-members in south-central Ontario by offering value added goods and services in the agricultural space, providing crop inputs, feed, petroleum, consumer goods as well as sundry products and grain marketing of selected grains within the geographic area in which the co-op does business.

Over the decades, Sunderland Co-operative has grown its membership base to 1,800 and continues to increase its ranks by 30 to 40 new member-owners annually. Blain Thompson, General Manager of Sunderland Co-operative describes the co-op as a full-service agricultural provider. “As far as services go, we supply our members with feed for livestock, fuel for farming operations, agronomy such as seed, fertilizer and crop protection, and we also market grains once the members harvest them in the fall. Our goal is to provide our farmer-customers with everything they need to run a profitable operation from planting to harvest.”

Co-operatives count their successes beyond their profits by focusing on co-operative principles and values. Co-operatives are owned by their members, and through an elected board of directors the members have a say in how the business is run. Members purchase quality products and services at competitive prices and also own shares of the co-operative. In turn, they receive patronage refunds at the end of the year for those purchases. “Through this democratic approach to doing business, our members benefit two-fold, by having a voice in how the business is run and being able to share in the profits,” says Thompson.

Sunderland Co-operative has shown significant growth and consistency over its lifetime of more than 60 years and today the co-op operates from three prominent locations — head office is located in Sunderland, the Ag Centre in Oakwood and its Petroleum division located in Lindsay. To this Thompson said, “We have paid annual dividends to our members consistently for the past 61 consecutive years.”

Sunderland Co-operative strives toward continued growth for its members. Currently the co-operative has expanded its Oakwood Ag Centre by installing a new grain storage bin with storage capacity of 346,000 bushels. “When we purchased the Oakwood facility in 1994, our total storage capacity was 375,000 bushels, so this new bin is almost the same size as our initial full capacity. Once installed, the storage capabilities of this facility will be over 1 million bushels,” says Thompson. Besides increasing storage capacity, the co-op also installed a state-of-the-art seed treatment facility which gives the co-op opportunity to pre-treat seeds for planting and trade this seed in bulk, making seed purchases more economical and efficient for its customers.

Forming partnerships is another way in which Sunderland Co-operative has grown its success. In 2003, a joint venture with UPI Energy LP was formed and the Petroleum centre in Lindsay was created. This partnership allows the co-op to supply its members with more environmentally-friendly ethanol blended gasolines as well as bulk clear and dyed diesel fuels. In addition, heating fuels are a large part of Sunderland Co-operative’s full complement of liquid fuels.

Sunderland Co-operative also offers propane services to local rural residents as a heat source as well as to farmers for agricultural use, such as heating chicken barns or for grain drying operations. “In regards to fuel, we also provide our members with a Cardlock Fuel Network.”

Thompson explained that by using integrated fueling cards, this network of commercial fueling stations is available to the co-op’s members 24/7, 365 days a year. “This network has been working out very well for us and for our members, so we are looking at the Independent Petroleum Network, which would allow people who have a fueling card with Sunderland Co-op to access an additional 50 FS branded fueling sites across the province.”

“There is no one thing to which we attribute our success, but our membership numbers continue to grow as well as our sales numbers,” says Thompson. “The one thing that stands the test of time is our commitment to a solid foundation and strong relationships with our members and non-member clients. This true sense of community strength has been built from more than 60 years of honesty, diligence and quality customer care. Co-operative principles and values are what make us stand out from the rest.” Sunderland Co-operative has shown true dedication toward these values by providing consistent generous donations to many local agriculture fairs as well as local hockey, baseball, and soccer clubs.

Youth development programs such as Junior Farmers Association of Ontario and local 4-H Clubs depend on local support to keep these programs thriving. Sunderland Co-operative maintains its status as a solid supporter of these associations and has taken an active role in sponsoring at least one local young person each year to attend a life-changing leadership summer-camp program called Co-operative Young Leaders. “We are especially proud to see that this year, the young person we have sponsored for camp, who has graduated the three tier program, is now giving back by becoming a volunteer camp leader,” says Thompson. “Therefore spreading these values further!”

Farm co-operatives are a tradition that goes back to the late 1800s in North America. Sunderland Co-operative markets its products and services under the FS brand which is part of a larger network or system of agriculture co-operatives in Ontario and the Midwest United States known as the GROWMARK System.

GROWMARK, Inc. serves Ontario and the American agriculture industry from the Rocky Mountains to the east coast, and has brought this business model to the cutting edge. Sunderland Co-operative is a member-owner of GROWMARK, Inc.

In the co-operative model, the customers are the owners. So the philosophy is guided through a customer perspective and a democratic approach which results in sharing of the profits through co-operation. To this Thompson says, “As the world population and markets keep growing, GROWMARK and the FS Co-operatives have a mandate to help ensure that their farmer-owners maximize every acre they own, to produce food. To help meet this increasing challenge for farmers to produce more food on less land, we continue to aim towards providing local farmers with the best tools to help them better manage risk, improve their competitiveness, increase their profitability and ultimately help make their lives easier. We value and see every dollar that we handle as a farmer’s dollar.”