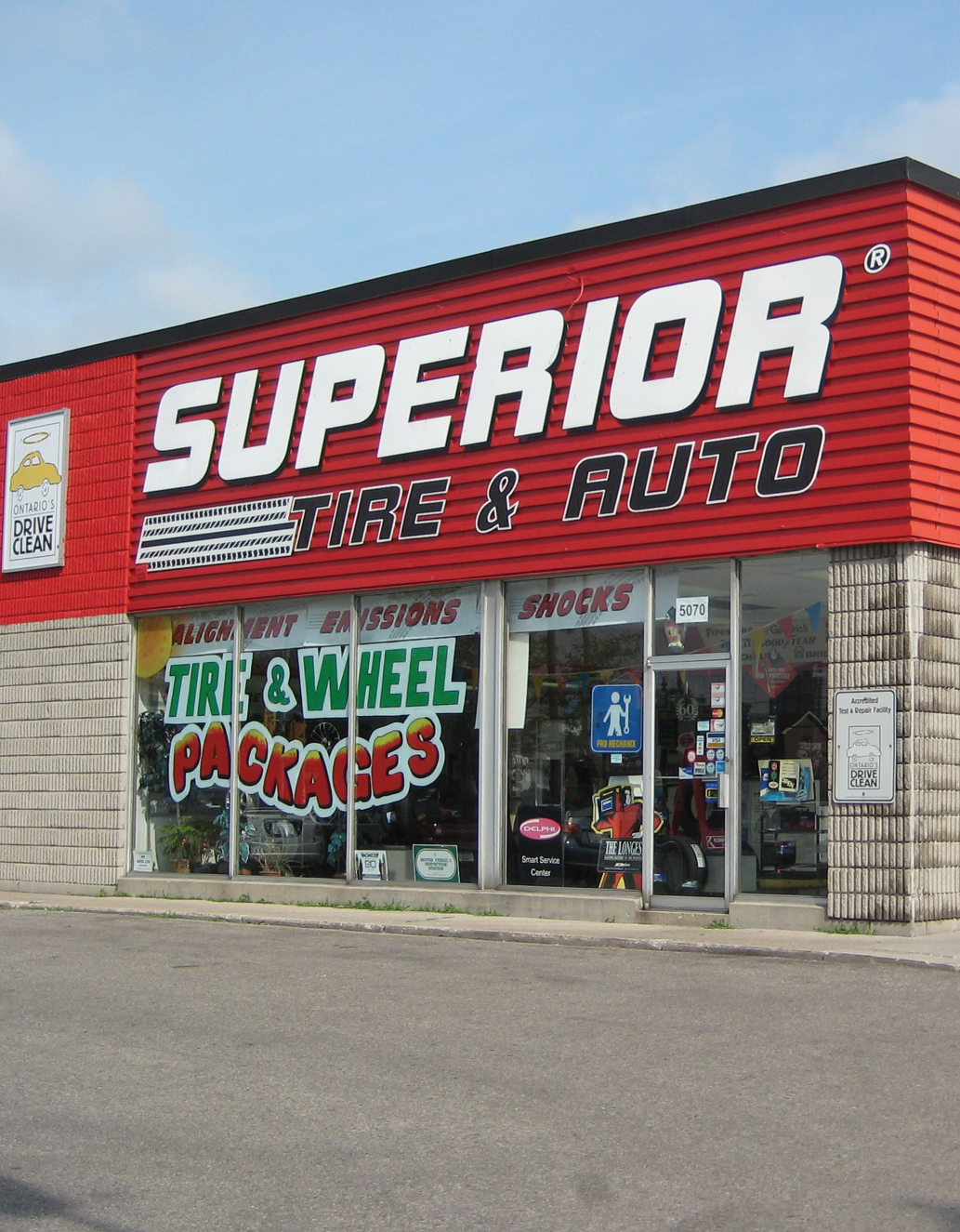 Superior Tire & Auto is one of the most innovative and respected retail tire stores and car-care centres throughout southern Ontario. The company, which has been steered by three generations of a close-knit family, continues to show how innovation, teamwork and dedication to customer service leads to success.

Superior Tire & Auto opened for business on April 4, 1942, behind a dairy barn on Danforth Avenue in Toronto and celebrated its 70th year in business in 2012. Original owner Walter Chudy, invested $100 in the venture, which at the time specialized in retail tire sales along with repair to cars and trucks.

By 1952 the operation had outgrown its original location. Chudy and some friends constructed much of the Danforth and Victoria Park location themselves and the business moved to the new site. In 1955, 17-year-old Paul Hyatt started working for the company part time. Paul would later become the owner and president of Superior Tire & Auto. He started with Superior, changing and repairing tires and working on service calls. In 1978, more than 35 years after the doors of Superior Tire opened, Paul Hyatt became the President and CEO of Superior Tire & Auto.

The third generation was already working his way up the corporate ladder. Paul’s Hyatt’s son, Jason, started changing tires part time when he was 15, at the original Danforth Avenue store. After he graduated from university, Jason became manager and eventual franchise owner of the Superior Tire store on Keele Street.

The 1970s resulted in the company placing greater focus on expanding its retail operations. Employee service skills were upgraded and on-going technical training became an integral part of the “Superior” way. This philosophy would enable knowledgeable staff, supported by state-of-the-art computer programs to offer their customers the best automotive service and value found anywhere. In 1973 a second location at Markham Road and Sheppard Avenue was opened and it became the Company’s corporate headquarters. In 1977 a third store was added on Dufferin Street.

Superior Tire & Auto Franchise programs began in 1991, with locations in the GTA and throughout Southern Ontario. Other locations are being planned outside outside of the GTA in such areas as Newmarket, Ajax, Pickering and Oshawa, according to current company president Frank Bongiovanni. Frank was one of the original franchisees in the early 1990s and after close to 12 years as a Superior Tire franchisee, went to the company’s head office. Bongiovanni’s franchise partner Howard Minsker, also owns and operates a successful franchise location.

Superior Tire & Auto offers a huge selection of brand name tires such as Bridgestone, Michelin and Goodyear, to name a few. There are also private label tires all covered by the Superior Price Guarantee. They also provide complete warranty approved maintenance and repairs such as oil changes, brakes, shocks, struts, alignment, and transmission fluid flushes for both foreign and domestic vehicles. Customers can view the services offered, request a quote for a repair and schedule service on-line if they wish or, go into the location nearest them in person.

According to Bongiovanni, the biggest challenge their business faces today is from the economy and the internet.
“Companies advertise online and people may buy tires from these companies because of the price,” he says. However, they must compare the total costs including shipping, installation, etc.

In order to compete, businesses such as Superior Tire & Auto have to offer not only competitive prices, but tremendous customer service and “extras” to keep people coming in and coming back. Some examples of Superior’s services include a free tire rotation every 10,000 km, half price alignment on the purchase of four tires and more value added services.

The corporate website lists a vast array of information and services and there is a mobile app you can download to your smartphone, to access information on manufacturers’ rebates, a wide assortment of coupons and specials and a calculator to cost out the pricing of tires. Superior Tire & Auto’s website has a wide appeal to Internet-savvy customers.

But the main reason for the success of Superior Tire & Auto is the hard work and dedication of employees from Head Office down to the shop floor.

“Our policy is to treat our customers, employees, suppliers and the community with honesty, dignity and respect” says former President and CEO, Paul Hyatt. “From day one, we provided quality products, value pricing and ‘feel good’ customer service while striving consistently to exceed our customer and employee expectations.And these policies, practiced for over half a century, have led directly to the current success of Superior Tire & Auto.”