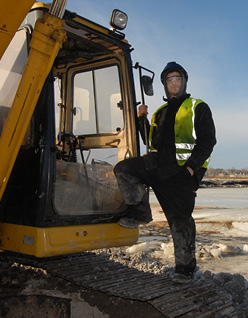 The Tar Ponds and Coke Ovens are the vestiges of days gone past, when Cape Breton had one of the world’s largest steel plants. Very soon, the only signs of Cape Breton’s steel and coking industry will soon be the educational signs set up along the forest path along the Creek. The Sydney Tar Ponds Agency is making sure of it.

Nearly 100 years of steel and coke production has left behind more than one million tonnes of contaminated soil and sediment in the Muggah Creek at the centre of Sydney. After a few false starts, extensive public consultation and technical studies, a $400 cleanup plan, jointly funded by the Government of Canada and Government of Nova Scotia, was announced in January 2007. The undertaking was to be led by the Tar Ponds Agency, headed by Kevin MacDonald, CEO. Four years into the six-year plan, the Sydney Tar Ponds are starting to show a glimmer of what majesty lies beneath.

“An important factor for the success of this massive undertaking is the Joint Action Group (JAG), formed between governmentand community agencies, and its dedication to the community-based decision making process.” JAG’s mandate is to seek consensus on safe, technically-sound cleanup solutions that will best benefit the land and the province. Its members asked government to expand the proposed cleanup area, conduct thorough site assessments following national guidelines, and begin preliminary cleanup projects. In total, JAG members put in more than 100,000 volunteer hours in 950 public meetings over seven-and-a-half years.

Numerous attempts have been made to clean the tar ponds, but it was in this past decade that technology grew to match expectation in the Solidification & Stabilization (S/S) methods, deemed the most efficient way to deal with the Tar Ponds. Developed in the 1950s, S/S with cement is a commonly used remediation method for the safe treatment, management and reuse of contaminated waste and is used today to successfully treat industrial hazardous waste and contaminated material.

“Solidification and stabilization, what does that mean?” asks MacDonald. “The process uses cement that is mixed in with contaminated sediment in the Tar Ponds. Of course a huge part of the project in order to do that you had to divert the brook water that flows in to the South Tar Pond. Before we could begin, the water had to be redirected by a huge pumping system that diverted the water from the Tar Ponds and Coke Ovens Brookwhich exposes the black earth at the bottom of the ponds.”

That black earth is then essentially entombed, and covered with grading layers. “We are sealing it to nature both on the sides and the top with an impermeable surface which will be top soiled, hydro-seeded and so on.”

The metamorphosis is akin to reclamation of tailings ponds in the oil sands in that the land will be restored to fertile, green land.

Sectioned off into three phases, the project is at an interesting junction when one-third of the pond is almost completely reclaimed, one-third has been drained of water, and the final third awaits reclamation. It shows a stark contrast and illustrates the magnitude of the project, slated to be complete no later than March 31, 2014, a day Sydney is eagerly awaiting.

“I tell you, the project I believe is embraced by the majority of the community, they are very supportive. There is positivity about the project,” says MacDonald. “They can’t wait to see it all done.”

Legacy of the Tar Ponds

“The goal of the planning exercise was to prepare a phased land use plan that is logical and achievable, but is also visionary and transformative,” said Gary Campbell, President of Nova Scotia Lands Inc. “When it comes time to implement, the plan should leave a lasting legacy for the entire region.”

“In the very heart of the city, we will have this big beautiful recreation area for all to enjoy,” says MacDonald. Both passive and active recreation will take place on the new land; picture an urban forest with walkways, interpretive panels that speak to the legacy of steel making and coke ovens.

Along the channel will be walking paths, new roads, sidewalks, bridges, commercial expansion along the SPAR road, and new infrastructure that will merge Whitney Pier with downtown Sydney.

“I almost feel blessed to have worked on the Tar Ponds project and with this team,” says MacDonald. “It’s just a joy to work here and there is not a member of the agency team of government structure that is not absolutely motivated to get this done according to our goals because we all realize how important it is.”