Take a Penny, Leave a Penny? 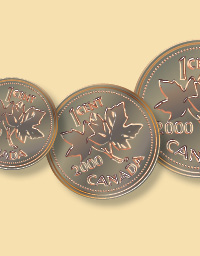 On March 29, the Government of Canada announced its plans to eliminate the penny for our coinage system as of this fall. The object, said the press release, was to “modernize” Canada’s currency set, and cited rising labour, metal and other manufacturing and distribution costs as reasons why the penny is too expensive to produce.

Over time, the thinking goes, the penny’s burden to the economy has grown relative to its value as a means of payment. It costs the Government 1.6 cents to produce each new penny at an estimated cost to the Government of supplying pennies to the economy is about $11 million a year, and this doesn’t add up anymore.

What Does This Mean for Consumers?

Although consumers are being encouraged to donate their pennies to charities, consumers can use the coin for transactions “indefinitely,” according to the Mint, and all cash transaction should be rounded to the nearest five-cent increment.

Those panicking about the increased cost of products over time need only look to other countries who have also done away with their penny, such as The Netherlands, Australia, New Zealand, Finland, Brazil, Sweden and Israel, without an effect on price inflation.

The news of the elimination of the penny has brought the spotlight back on the oft neglected coin, at least temporarily. Most news media took the opportunity to lament the increase in the cost of one’s thoughts, the reliable source of good luck and penny loafer accessory, but not much more. Soon, the penny will be a distant memory, along with the one dollar and two dollar bills.

An informal study conducted in the George Media offices show that the large majority of people will not miss our copper coin, but there is a bright side for those who may. The calculation of the Goods and Services Tax (GST) or Harmonized Sales Tax (HST) on purchases, whether for cash or non-cash transactions, will continue to be calculated to the penny and added to the price. It is only the total cash payment for the transaction that will be rounded.