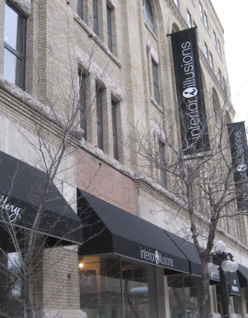 Its early exploration into the United States market, one of the most damaged during the global financial dip, allowed the company to observe investment opportunities within the American real estate market and then use these findings to carve its niche as a multi-family facility investor.

“We looked at a lot in the United States, as we thought there might be some opportunities to buy for pretty good prices,” Thiessen explained, “but whenever we found something, we couldn’t get financing.”

The problem that existed within the United States was that, while there were a lot of real estate bargains during the recession, many American banks could not risk dealing with a foreign buyer.

Home losses and foreclosures during the recession pushed many Americans into multi-family dwellings, and many more Americans became renters rather than owners. This represented an emerging trend within the United States and grew as the focus of Taurean Global Properties within its Canadian operations.

Multi-family housing units, such as condominiums, are more frequent in Canadian urban centres, located in the downtown core rather than the suburbs. Since the 1990s, the trend has been more and more suburban Canadians downsizing to return to concentrated housing in the intercity.

The trend is happening across Canada, at various stages and paces, and Winnipeg is the most recent urban centre to experience this cycle. Although based in British Columbia, Taurean Global Properties conducts many of its operations in Winnipeg, and the company is now benefiting from this trend.

“The wonderful thing about Winnipeg is that it has an inventory of beautiful turn-of-the-century buildings,” Thiessen said. “In other cities, with faster development rates, those buildings were torn down, but they never were in Winnipeg as it never had that big boom. We see Winnipeg as a place where we’re really participating, but unfortunately, a lot of other people have started to realize it too.”

With this, Taurean Global Properties has brought its multi-family housing investment focus to Winnipeg, building and converting existing infrastructure into condominiums. Purchasing a 72,000 square foot warehouse in Winnipeg, the initial plan was to convert it into an apartment building, but lucrative grants offered by the City of Winnipeg saw it retrofitted as a condominium, as these buildings offer greater tax revenue to the municipality.

A small yet fervent investment base, continuing to invest in and oversee the growth of Taurean Global Properties, provides the company with the proper resources, in terms of both finances and personnel, to seek undervalued residential areas to be reformed as more profitable ventures. Like many other major cities in Canada, Winnipeg owns an emerging housing market, with a stable population rate and a low vacancy rate, making the city an attractive investment option for Taurean Global Properties.

The company has found its niche in searching for prime investment bargains, with the strategy of purchasing undervalued buildings and then remodeling these into more profitable ventures. Taurean Global Properties invests in under-the-radar, undervalued and underappreciated markets, then using an upgrading and maintenance process to boost property values.

“We always say if we can’t afford to buy – and our criteria is buying it for under the replacement value – then we build,” Thiessen said. “If the cost to buy is above 80 per cent of the build price, you may as well build because then it is brand new and you won’t spend any money on repair and maintenance. You can change everything about a property, from the paint, to the appliances, to the management, but the one thing you can never change is the price you paid for it.”

Asked to look five years down the road, Thiessen believes that Taurean Global Properties still has a fair amount of work ahead, yet the overriding goal is to continue purchasing more and more multi-family properties and continuing its path of building up a critical mass.