MONTRÉAL, Nov. 26, 2019 (GLOBE NEWSWIRE) — After a weeklong strike, the Teamsters and Canadian National (CN) have reached a tentative agreement to renew the collective agreement for over 3,000 conductors, trainpersons and yard workers.
Normal operations at CN will resume tomorrow at 0600 local time across Canada.“I am pleased to announce that we’ve reached a tentative agreement with CN. I would like to thank our members for their incredible courage and solidarity,” said the president of Teamsters Canada, François Laporte. “I would also like to thank all the Teamster local unions from across different industries, all the labour organizations and members of the public who supported us on the picket line.”The tentative agreement must now be ratified by Teamster members via secret-ballot electronic voting. Before the voting period opens, union meetings will be held across the country to explain the terms of the agreement to members. The process usually takes several months.Details of the tentative agreement will not be released until the members have had a chance to review the document first.Teamsters would like to thank Prime Minister Justin Trudeau for respecting workers’ right to strike. The union would also like to acknowledge Labour Minister Filomena Tassi, Transport Minister Marc Garneau, and the Federal Mediation and Conciliation Service (FMCS). They were instrumental in helping parties find common ground. “Previous governments routinely violated workers’ right to strike when it came to the rail industry. This government remained calm and focused on helping parties reach an agreement, and it worked,” added Laporte.Teamsters represent close to 125,000 workers in Canada in all industries, including over 16,000 in the rail sector. The International Brotherhood of Teamsters, with which Teamsters Canada is affiliated, has 1.4 million members in North America.Media requests:Christopher Monette
Director of Public Affairs
Teamsters Canada
Cell: 514-226-6002
[email protected]
CBJ Newsmakers 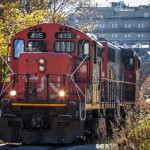