The Canadian Mining Hall of Fame 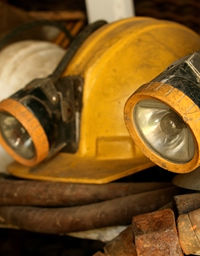 Being acknowledged as a recipient member into any industry’s hall of fame is most often regarded as the ultimate honour and achievement in one’s career, the icing on the cake so to speak.

The Canadian Mining Hall of Fame recently inducted five esteemed colleagues during a gala ceremony held at the Fairmont Royal York hotel in downtown Toronto. The Hall, established in Ottawa in 1988, now stands at 155 distinguished members.

The other enshrinements were John A. Hansuld and Ned Goodman.

John A. Hansuld was born in Ontario 80 years ago and is known as a pioneering geochemist and mining industry advocate. He attended McMaster University in Hamilton before heading to Vancouver where he obtained his master’s degree from the University of British Columbia, after which came a PMD from Harvard Business School in 1968. Oddly enough there was a time when Hansuld didn’t think he wanted to attend university at all.

“But I ended up going to university until I was 30,” Hansuld laughs. “My father was an educator so I guess sooner or later I would have gone. In Grade 13 I wasn’t terribly motivated and wasn’t doing that well.” But a close friend strongly encouraged him to enroll, and the rest as they say, is history.

Hansuld was known as a pioneer in the areas of geochemical prospecting and the application of the tax shelter of flow-through share program to mining, “It was nice to be recognized by your peers,” Hansuld told CBJ just after the official event. “A lot of effort over the years seemed to be appreciated so I was thrilled and it caps a 60-plus year career. I feel very strongly about Canada. I was born here and I am very proud to be Canadian and to be in the Canadian exploration industry. I think we’ve done a remarkable job and I’m just tickled pink that I was able to contribute to that reputation.”

Hansuld joined AMAX in 1961 and in the 1970s built Amax Exploration here in Canada into a premiere mining and exploration company that went public as Canamax Resources in 1983. Canamax was able to raise about $30 million via flow-through shares, which was a tax incentive adapted from the oil and gas sector. It was that financing that led to the formation of partnerships that raised $5 billion in capital over the next five years.

“The mining business is cyclical,” Hansuld notes. “We went into a real downer where metal prices had pretty much collapsed and exploration was drying up and overnight we practically did a 180 turn from almost no exploration to one of the biggest exploration booms at the time, which would have been the mid-1980s.”
Flow-through share financing still exists with the basic same underlying feature of writing off Canadian exploration expenditures against corporate income.

“They’ve added what they call an investment tax credit so we now have what’s called super flow-throughs,” Hansuld reveals. “The program is uniquely Canadian and the envy of a lot of people in the likes of Australia and the U.S. where they don’t have that sort of tax feature.”

Hansuld also served as President of the Prospectors and Developers Association of Canada (PDAC) for three years from 1993 to 1996 and is widely credited with helping to expand the association’s international profile.

Ned Goodman, 75, was born in Montreal and became well known for his many successes in Canada’s minerals industry as a company-builder, merchant banker and investment advisor. In 1967, he co-founded Beutel Goodman & Co. Ltd., establishing the firm as the premiere destination for junior mining investment opportunities. Goodman really left his mark in the 1980s, building several flourishing mining companies such as International Corona, IAMGOLD and Kinross Gold. He also backed Quadra FNX Mining’s discovery and development of new nickel deposits in the Greater Sudbury Area in northern Ontario.

“It’s quite exciting for me to have been recognized by the Canadian Mining Hall of Fame,” Goodman tells us. “There are some very important people who’ve made it before me so I take it as an honour.”

“I’ve been involved in the resource industry as a geologist and financier since 1962, which is when I graduated from the University of Toronto,” Goodman says.

“I funded my first mining operation, which was probably the first mine Barrick bought in 1964 and I’ve been doing it ever since with CMP with probably $5 billion going into exploration in Canada.”

Goodman co-founded the finance company CMP Group to assist companies in their efforts to explore projects in Canada. Furthermore, he was the driving force of the Dundee Group of Companies, which grew from a $600 million base to a $25 billion mutual fund under his watchful eye.

“The early part of my career was mostly in Canada, but in the last five to 10 years we’ve expanded globally,” Goodman reveals. “We’re involved with a major iron ore producer in Sierra Leone and we’ve put up funding for that.”

Goodman remains active in day-to-day operations and has no plans to slow down.

“I operate on the basis that there’s no finish line; you keep going,” Goodman states. “The race is still on and I’m very happy to stay with it. I’m healthy and as long as I can be useful and my mind works properly, I’ll stay at the game.”

Robert Hunter and Robert Dickinson first formed a business alliance in British Columbia 27 years ago with the creation of Hunter Dickinson Inc. (HDI), which is regarded as one of the most respected mineral exploration and mine development groups in North America. Hunter was the financier and promoter while Dickinson focused on the technical aspects of the operation.

As President of Breakwater Resources, Hunter spearheaded the development of the Cannon gold mine in Washington state in the 1980s. He then joined forces with Dickinson, 64, to speed up the development of the Golden Bear project in northern B.C. which was later acquired by Homestake Mining through a $40 billion purchase in 1988. HDI has been involved in more than 12 mines and holds more than 40 projects worldwide. Hunter passed away five years ago in his 80th year.

Phillip G. Hallof of St. Louis, Miss. was known as one of the “fathers of modern geophysics” for his innovative work with frequency domain induced polarization (IP), which developed from relative obscurity into an essential mineral exploration tool. Educated at the Massachusetts Institute of Technology, Hallof joined McPhar Geophysics Inc. where he became President and a Canadian citizen in 1961. Fourteen years later he founded Phoenix Geophysics where he contributed greatly with the advancement in IP science, complex resistivity (Spectral IP) and magnetotellurics. Hallof died in 1992 at the age of 61.