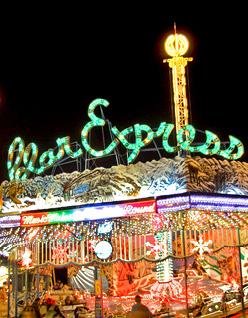 Entertainment for All Canadians

The Canadian National Exhibition (CNE) is Canada’s largest annual community event. Over the course of its 18-day run (August 17th to September 3rd), the CNE attracts more than 1.3 million people each year (1.31 million in 2011). This summer, the CNE offers a wide variety of entertainment and events such as concerts, aerial acrobatics and ice skating shows, celebrity chef demonstrations, a dog show, a working farm, and a three-day Air Show, all of which are accessible with admission to the CNE. Midway rides and games, wacky fair food, as well as international food and shopping are also popular highlights of this major Toronto event.

Founded in 1879, as the Toronto Industrial Exhibition, the CNE served the same function as all the early provincial fairs: to promote arts, agriculture, and industry in the province. Fall fairs were ‘universities for the people’; a place where they could see the latest in everything from fine art to threshing machines.

David Bednar, General Manager of the CNE, told The Canadian Business Journal, “Early on, the CNE developed a reputation as ‘the place’ to see the newest in technologies and commercial products. However, as time passed and Canada’s industries developed, each industry created their own specialty shows such as car, home, and interior design shows. Therefore, what is left of the CNE’s original intention, is agricultural education, entertainment and celebration of community.”

Bednar made the point, “The CNE is a huge economic driver and plays a significant role as the largest community celebration in Canada. As one of our past presidents always says, “If the CNE didn’t exist, someone would want to invent it.”

CNE’s 2009 Economic Impact Assessment reports that the CNE generates an estimated $58.6 million for the City of Toronto, and $80 million for the Province of Ontario each year, with spending creating $12.9 million in tax revenue for three levels of government. In 2009, CNE attracted more than 275,000 out-of-town visitors to the city, and each year CNE-related spending supports the equivalent of 633 jobs in the region. With annual visitation of approximately 1.3 million people, the CNE gives businesses an excellent venue to sell and to connect with their customers. CNE has more than 700 exhibitors from throughout Canada and around the world, as well as many corporate sponsors including Coca-Cola, Chevrolet, Pizza Nova, President’s Choice Financial, Rogers, Molson Canadian, Pizza Pizza, and many more.

In the matter of development of the CNE site, the 18-day affair that takes place across the grounds of the Exhibition Place, the management of the Exhibition Place continuously works on refocusing and repurposing the heritage structures existing on the grounds. For example, the original Ontario Government Building has been repurposed into a banquet facility — the Liberty Grand Entertainment Complex. What was originally the Art Crafts and Hobbies Building has been refurbished into what Toronto now recognizes as Medieval Times.

On the environmental front, the CNE has been honoured with EcoLogo Certification in 2010 and 2011, establishing it as the “greenest” fair in North America. In 2011, the CNE diverted 82 per cent of the total waste generated during the 18 day fair, and has reduced its energy use by 1.06 megawatts since 2005. This translates into a significant reduction in greenhouse gases amounting to 267.32 tonnes of carbon dioxide.

“Every business has a unique selling proposition,” Bednar elaborated. “In the past, this proposition for large fairs such as CNE was ‘the future’ — people came to these fairs because they hoped to see new inventions. Today, we need to be more nimble and much savvier about attracting new customers. We do a lot of research as to which demographics offer growth potential for us, so we can create programs that appeal to these people. We are deliberately programming and marketing to attract these groups [Millennials and the Boomers] outside our core group, which has traditionally been adults aged 25 to 54 with children 12 and under. Our unique selling proposition to each demographic is that all CNE events and attractions are free with admission to the fair.”

CNE offers a tremendous value to its visitors. For as little as $5 [CNE’s ‘$5 after 5 p.m.’ special on Monday through Thursday evenings], and even for the full price of $16, visitors have a tremendous array of entertainment experiences at their disposal, from aerial acrobatics and ice skating featuring Olympic medalists at Ricoh Coliseum, to visiting celebrity chefs such as Michael Smith, Laura Calder, and Anna Olson, and not to mention concerts featuring performers such as Nick Carter, Freddie McGregor, Don McLean, The Arkells, Herman’s Hermits, The Tea Party, and many others. “We are a multi-generational attraction, where people can come with their children or their friends, knowing that there is a lot to see and lot to talk about, and where they can all enjoy themselves in individual ways,” Bednar said.

Over its 134 years, the CNE has been an excellent example of the evolution of Canadian and North American exhibition environment, always changing and evolving with the times. The CNE has seen major changes in the purpose of the fairs and their relationship to the public — from community gatherings, through technology achievements to entertainment. Today, the CNE continues to deliver value to its visitors through unique entertainment options designed for all ages and presented in variety of venues, while contributing some $80 million to the Ontario economy each year.