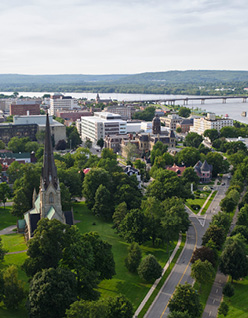 As the capital of New Brunswick, the City of Fredericton continuously works on a steady and sustainable growth. This uniquely Canadian city represents an important cultural, artistic, and educational centre for the province. The city is a home to two universities and many cultural institutions. Due to its high educational base and concentration of knowledge-based industries, Fredericton was named “One of the World’s Top 7 Intelligent Communities” two years in a row by the Intelligent Community Forum of New York. It is due to this fact that the city continues to attract various technology-based businesses. Fredericton has also been recognized as the most cost-competitive place to do business in all of the Americas by fDi Magazine “Cities of the Future” feature and by the KPMG Competitive Alternatives Study, as well as “One of Canada’s Top 10 Best Places to Live” every year since 2007 by MoneySense.

Mayor of Fredericton Brad Woodside told The Canadian Business Journal, “We started on our path of being a smart, sustainable city by creating an economic development strategy where our community stakeholders came together and where we asked ourselves ‘Where have we been, where we are now, where do we want to go?’ We realized that Fredericton was a smart city with its universities, large base of engineering firms, and software companies. We have an outstanding quality of life. Add to that, all the awards we have received – including the World’s Top Seven Intelligent Communities – confirm that we are on the right path and doing a good job. We have built on our strengths to build Fredericton towards its Smart City status.”

Laurie Guthrie, Economic Development Officer of the City of Fredericton, said, “Fredericton has been laser-focused on advancing its knowledge-based economy since the 1990s. We started to attract the knowledge-based industries – the sectors that provide the high-paying jobs – the IT sector, the R&D, and the engineering companies. These profitable industries support the local economy and increase the provincial GDP, so we want to continue to nurture these types of companies.”

To create the climate and intellectual infrastructure to grow the knowledge-based industries, the City, Province, Enterprise Fredericton, and University of New Brunswick created Knowledge Park. The Park provides a clustering environment for companies engaged in research, development and technologies’ applications in fields such as IT, biotechnology, education, engineering, healthcare, forestry and agriculture. The Park’s goal is to facilitate technology transfer and other partnerships involving academia and the private sector. “We currently have five buildings in the park, and future development plans will include 17 buildings, encompassing the high-tech industries that will continue to promote cluster growth.”

The Knowledge Park is an integral part of driving Fredericton’s technological growth, and currently hosts world-leading companies like Radian6 (recently acquired by salesforce.com, Inc.), Skillsoft, and CGI. The latest tenant is the arrival of another major technology company — Siemens.

Fredericton’s intellectual infrastructure, workforce pipeline, and research capacity with the universities enables home-grown companies like Q1 Labs (recently acquired by IBM), and Accreon (which just launched new iTacit Inc., touted to be potentially the next big thing in the high-tech industry) to flourish, and do business on the world stage.

Fredericton offers its citizens a balanced lifestyle, and this balance attracts and retains people in the community. To support the growth of the city and attract new business through professional conferences, Fredericton built a new downtown Convention Centre (the City’s first LEED Silver development), Provincial Office Building, and Parking Structure. Guthrie said, “Our new Convention Centre brings new people into the community, supporting our small local businesses in downtown. We also have many cultural programs running throughout the summer, and we have possibly one of the largest jazz festivals – Harvest Jazz & Blues Festival – in Canada happening in the fall of each year. With all that’s happening in the city, there is a great ‘buzz’ going on downtown throughout the year.”

While serving New Brunswick as a cultural mecca, the city also offers an abundance of recreational activities with over 88 kilometres of trails winding throughout the city under a 65 per cent canopy of trees. The city provides affordable housing, the lowest taxes in the province, and a safe place to live, work, and do everything in between. The city is in the final stages of building the Grant-Harvey Centre – a twin pad arena (first geothermal development in the city) with a running track, indoor tennis facility, artificial turf soccer field, baseball field and a dog park.

Woodside told CBJ about the culture of innovation within the city, “With all the innovation we have introduced in the city, from our business immigrant mentoring program to our free wireless access throughout the city, we are often cited as a first in Canada. I recently met with mayors of several cities, and after talking with them I came to the realization that Fredericton leads the way in many aspects of a smart city. Building a modern city includes many pieces and it is a big puzzle, but all the pieces seem to be in place for Fredericton and we are firing on all cylinders—you can feel the satisfaction of our citizens whenever you walk the streets of Fredericton, or sit in a café. Bringing all the pieces together did not happen overnight; it came through good planning, great financial management, and smart investment.”

What has been the major strength of the city has been the collaborative work behind all major developments within Fredericton. Woodside said, “All of our major stakeholders – our chamber of commerce, our enterprise business network, our downtown development organization – everybody is on the same page, working towards the same goals, and heading in the right direction. We don’t have any fractions within our community and that has been our major advantage coupled with our smaller size.”

As the international awards for innovation pile up on the shelves of City Hall, Fredericton realizes that the city became a leader not by chance, but by careful planning and design. “‘Sustainable’ is the key word for us. While all our development is underway, we make sure we manage it well, and that it happens in a manner that does not take away from our quality of life which is our greatest asset.”