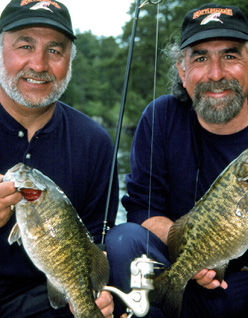 “Sharing a fishing experience, there is nothing like it on the planet. That early morning sunlight on a quiet lake sharing experiences and dialogue; what a great social network that is, just sitting and talking, which is a lost art. Fishing brings that all back.”

Angelo Viola, Host and Executive Producer of The Fish’n Canada Show, has translated a lifelong love with fishing into Canada’s longest-running and most watched outdoor television show.

Pioneers of recreational television programming, the history of The Fish’n Canada Show dates back more than 30 years. What started as a how-to video on bass fishing, Viola and his brother Reno piqued the interest of local television networks, Global Television and then CBC, to produce a full-fledged weekly television show. The brand has also hosted its Outdoor Journal Radio Show for the past 15 years.

In 1988, The Fish’n Canada Show shifted to CBC for the next five years, a period which Viola attributes to the evolution of the show’s brand. As North America’s first over-the-air network broadcast of a fishing series, it was a major coup for The Fish’n Canada Show, expanding from its previous regional broadcasts.

“It started growing and we kept developing the show,” Viola told The Canadian Business Journal. “It’s a very large paternity and doing television programs to feed that is pretty logical.

The Fish’n Canada Show has set the benchmark in outdoor television programming. The show’s variety of personalities highlights its popularity. Any given week, the audience connects with a different angler.

“I think our strongest attribute, and the biggest difference with our brand, still to this day is that our personalities are regular people,” Viola said. “We talk like regular people, whether it’s on screen or live in-person, we have the same kinship with our viewers as any two fishing buddies would have.”

Reno Viola, and then Peter Bowman, co-hosts, have been instrumental in establishing the legacy of The Fish’n Canada Show.

“In the early days, we didn’t even see it as a career, let alone establishing one of the longest-running television brands in the country,” Viola said. “It has been a monumental task, and it has taken a lot of people and resources to bring [the show] to where it is today. Now that we’re at the top of the heap, it’s put the fear of God into us because it’s made us work that much harder to maintain it.”

Viola attributes the show’s roots to a history in tournament fishing, “I daresay we were responsible for how Canadian anglers view fishing today. We’ve gone from a total catch-and-kill notion to a society of all catch-and-release fishing. I think the fishing that we have in this country today is as good if not better than it was 30 years ago, and that all has to do with the management tools that we helped pioneer through television.

“We’ve created the new wave angler. We’ve brought a lot of concepts to the television screen, techniques that we picked up from southern pro fishermen who we were rubbing elbows with in competitions. We translated these angling styles to television, sharing them with the Canadian viewers, who in turn picked up on these tricks of the trade and it started sweeping across the nation.”

Viola urges everyone to get out and try the life altering experience that is fishing. Noting a tremendous renaissance and interest in angling, there is an urge to reattach to the fishing world, and to share the outdoor experience.