The Golden Age of Panama 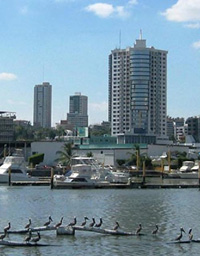 I had the pleasure of working with two professionals who specialize in counseling corporate clients, private investors, and heads of SMEs in their acquisition or sale of commercial, industrial, and financial activities in the Republic of Panama. Didier Vandervelde and Renan Guillou are respectively General Manager and Director of a company called Strategy Panama Corp based in Panama.

I learned that $100 million construction contracts, multibillion-dollar sales figures, consistent economic growth (10.3 per cent in 2011) are only part of the new Panamanian picture. New maritime ports, airports, metro and massive national infrastructure projects including, bridges, roads, public transport and hospitals contribute to the mix. With two nationwide salary increases since 2009 and unemployment at a historical low of 4.3 per cent, what we are witnessing is the construction of a vibrant new economy based on existing and strong foundations.

According to Mr. Vandervelde, the words ‘new,’ ‘expansion’ and ‘growth’ have become the norm for worldwide headlines relating to the Republic of Panama.

Some notable examples are the new subway costing $1.8 billion and the new $420 million energy interconnection project between Panama and Colombia.

Panama is also home to the Trump Ocean Club, the tallest building in Latin America. The volume of transactions in the Colon Free Trade Zone expanded from $16.1 billion in 2007 to $21.6 billion in 2010, an increase of 34 per cent over four years, and is expected to reach $30 billion by the end of 2012 with more than 30,000 direct and indirect jobs.

Panama’s evolution is the result of the combination of a “field of dreams” ‘if you build it, they will come’ phenomenon and both internal and external factors that could not have been timed better, even with the utmost care in planning. This phenomenon has led the current administration to undertake public infrastructure investment expected to reach $13 billion for the period 2009 to 2014. Construction of line two of the new subway is already under consideration and all this within President Martinelli‘s five-year term.

The beginning of the modern era dates back to the time of General Omar Torrijos, a visionary who understood the country’s true potential. The signing of the Torrijos-Carter Treaty in 1977 laid the first brick for the construction of modern Panama. Although the Noriega era, ending in 1989, delayed this progress, nothing since has stopped Panama’s development. Even taking into account the year of the international financial crisis, the last five years’ GDP grew at an impressive average of 8.66 per cent per year.

One of the sectors contributing to Panama reaching its sub 40 per cent objective is tourism. This industry, responsible for 9.5 per cent of GDP in 2010, is seeing an average annual growth rate of 10 per cent. Currently under construction are 25 new hotels increasing by 6400 units the total number of rooms available before the end of 2012 and by 2016, upwards of 17,000 new rooms are anticipated along with the creation of thousands of new jobs.

According to Mr. Guillou, he says that “although it is clear that Panama needs to continue consolidating its attractiveness as a business hub, its ease of doing business compared with other countries plays in its favor.” One notable example of the steps being taken to insure such success is the fiscal reform of 2009 that reduced the corporate income tax from 30 to 25 per cent in 2011. Definitely a move approved by all manner of businesses.

This little country of 3.5 million people is having an impact well beyond its borders. The expansion of the Canal project is not only a major catalyst for the unprecedented growth being experienced internally; it also is having an impact on major economies around the world. In the US, seaports on the East Coast are investing nearly $5 billion to modernize to accommodate the post panamax ships that they will receive as of 2014.

According to the American Southern Governors Association, Panama will be the economical bridge for U.S. companies in the region.

Panama is a small country with big aspirations. Its long term objective is clearly defined; consolidate its position as the premier business hub in Central America and become the door to Latin American markets. “Panama, where the world meets.”