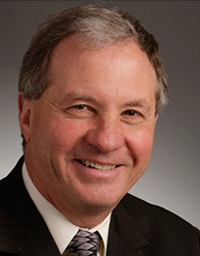 Ron Liepert has been a Member of the Legislative Assembly of Alberta since 2004, for the constituency of Calgary-West. On January 15, 2010, he was sworn in as Minister of Energy.

You could call it a good day. On June 1, Alberta’s budget received an unexpected $841 million injection with a record-setting single day land sale. The size of the scale surprised even Minster Liepert, who double checked that the number wasn’t a typo—previous sales are typically $84 million, so his initial thought was that someone had erroneously shifted a decimal point.

But the figures are real. The petroleum and natural gas land sale netted over $841 million, the highest ever total from a land sale in the province’s history, nearly doubling the previous record of $474 million in 2005.

The news was a bonus on top of an already great year, coming in a few months after the province set new records for the calendar year ($239 billion) and the fiscal year ($256 billion) sales.

“It was actually hard to believe,” recalls Minister Liepert. “When I saw it I thought there must have been a mistake.

“But it is real and it obviously shows the confidence that industry has in the future conventional oil that is driving these land sales,” says Liepert. “What is driving this confidence is new technology (such as horizontal drilling) that is allowing companies to go back into existing reservoirs, previously deemed to be depleted by vertical drilling.

An injection of nearly $1 billion into the treasury will significantly reduce the province’s budget.

“It certainly looks a lot brighter than it did on budget day,” Liepert says. “If our budget in the spring was projecting a deficit of $3 billion in one fell swoop, we have probably reduced that deficit by about a third if everything else remains normal. But our projected oil price for the 2011/12 fiscal year is significantly lower than where it appears the price will now settle, so we will have to adjust our price of oil (projected in the budget to be in the high $0.80s).

With the price of oil fuelling things like higher activity in the industry, Alberta reaps the tax benefits. “I think the combination of what we are seeing is going to go a long way towards clearing off our deficit. Although it’s too early to predict what the yearend numbers would look like, it’s very encouraging.”

Although some economic injections happen in a day, most take months, if not years, of work and preparation. One of the minister’s biggest priorities is to fast track the regulatory process for industry to get online in the oil and gas sector.

“We have got a very mature industry in Alberta, one that has been in effect for well over 50 years now,” says Liepert. “Sometimes what happens as new technology evolves, new regulations come into play to deal with that new technology and I think over the years what we have is a layering of regulations, if you like.”

As an example, if a project applies for approval through the energy resources conservation board, the approval process can take up to two years. They then have to turn around and start over again with the department of environment. If the approval involves public land, they might have to start over again. Minister Liepert’s objective is to house all those processes under one regulatory body in an effort to fast-track the process.

“It would mean an ability to streamline the process without reducing any environmental or workplace safety standards. It is also going to streamline policy setting within government. We are going to have one entity that will coordinate policy development. Those are the two main initiatives that we are going forward with.”

Oilsands as expediter of progress

The day before our interview, Minister Liepert visited the oilsands with a number of Members of the Legislative Assembly, highlighting the significant development of new technologies developed for the continued pioneering work done there.

“Whether it is new technology for extraction, reducing greenhouse gas emissions, or environmental footprint, it’s all intertwined in the work being done there, “says Liepert. “We had an opportunity just last week to tour the Syncrude research facility here in Calgary. The seven oilsands mining operators reached an agreement to share their tailing technology so there is tremendous work that is going on. There are…billions of dollars being pumped into research to ensure we get to a point where technology will always evolve but we need to try to get ahead of the game. I think industry is now committed and striving to doing that.”