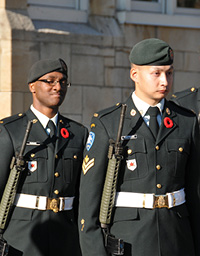 “In 1941, a great Canadian, General Georges P. Vanier, said: ‘The Canadian soldier, sailor or airman has left his country, his home, his family; on the altar of the Homeland, he gave away his own self. For this voluntary sacrifice, he asked no reward but rather, he generously offered the capital of his time, his health and his life. Expressing no hope, expecting no promise, he gave everything.’ These words still sound true 71 years later with the emergence of a new generation of Canadian soldiers called to serve around the world.”

I have been a follower of the noble work conducted by the Last Post Fund since first seeing a basic, simple ad for Last Post Fund, in the November 2010 Military Service Recognition Book, published by the Legion. I still have that ad; I was awe-stuck by their mission, vision and values: “The Last Post Fund is a non-profit whose purpose is to ensure that no war veterans, military disability pensioners, or civilians who meet the wartime service eligibility criteria are denied a dignified funeral and burial for lack of sufficient funds.”

Financial eligibility is based on an assessment, at the time of death, of the financial resources of the veteran and surviving spouse, if any. This assessment is guided by the Veterans Affairs criteria used for means-tested cases and varies depending on whether or not the veteran was survived by a spouse and/or dependent children.

From January 2011 – present, my primary contact has been Ret. Major Kenneth J. Usher CD.  He shares with me this reality, “Veterans Affairs Canada provides funding for our funeral and burial program; however it is restricted to our Second World War and Korean Veterans only.  As you most likely know many of those Veterans are in their late 80s or early 90s; there are less the 140,000 WWII and Korean Veterans left in Canada and they are passing at a rate of almost 1,500 per month.”

There are concerns that Veterans Affairs Canada might not extend the funeral and burial program to the Modern Day Veterans and therefore it is only prudent to assume Federal funding could stop in the next few years.

In the relatively brief period I have been following and researching the meaningful end-of-life duty this non-profit delivers to eligible military Veterans, more than 30,000 WWII and the Korean War Veterans have passed away; a startling number.  Most Veterans are capable of, or have pre-arranged their own funeral’s costs – but many could not, due to financial distress.  Re-read the opening quote by the Minister of Veterans Affairs – we must do all we can to honour the brave, courageous and loyal Veterans who fought for freedom, those who made it home in whatever condition they returned, enduring the physical and mental toll of warfare throughout their remaining days.  Perhaps they raised their families, ran a business, served their community and maybe just ended up without enough to be honoured with a dignified funeral and burial.  Veterans who survived served alongside those who didn’t make it home – we consider the survivors the lucky ones.  The painful memories, bodily injuries and psychological trauma and anguish the survivors must endure to their dying breath – makes us wholly accountable to provide for their funeral and burial.  We must show enough respect to lay a grave marker identifying their service to Country.

A Non-Profit in Transition

For a number of years I have researched and been involved with the transformations non-profits must take from time-to-time to move with the market it serves.  In the business world, leadership guru Ram Charan stated, “Only by looking out far over the horizon and taking into account developing trends that may not seem directly relevant now can you really do the kind of analysis necessary to prepare for rapid change and new opportunities. You have to look at your business from the outside in.”

Such is the reality for the Last Post Fund.  This is a non-profit that can trace its origin back to 1909, and with over a century of service faces the monumental task of continuing to provide service with dignity, honour and efficiency despite a significant budget cut and restructuring in 2012.

How to maintain services and ensure meaningful and dignified funerals, burials and assistance to a veteran’s surviving family while basic funerals grow ever-more costly and must be funded with less (or $0) Federal support poses quite a challenge indeed.

The Last Post Fund’s Governing Council was not caught by surprise by the Federal budget ambush but rather had analyzed the needs and challenges and prepared for the future.  It was in the midst of a bleak 2011/2012 Canadian winter, and with a bleak reality of current funding source being eliminated in the not-too-distant future, this agile non-profit, in true military precision formed a “Futures Committee” with the mandate to determine how the Last Post Fund would continue without the GoC/VAC funding.  The Last Post Fund’s June 2012 newsletter (Vol. 3, No. 3) announced the ambitious goal – to fund-raise $9.4 million in an effort spanning 2012-2015 – and without fear or trepidation selected Major-General (Retired) Lewis MacKenzie, UE, CM, CMM, MSC, O.Ont, CD as Honorary Chairman for fund raising and Lieutenant-General (Retired) Lou Cuppens as Campaign Coordinator.

$10,000 – $24,999: “Supporters” Same as Friends, plus a feature story on your organization in the LPF website and newsletter and a name on a new brick wall adorning the Reception Centre at National Field of Honour

$25,000 – $49,999: “Benefactors” Same as Supporters, plus photo of cheque presentation and news release to targeted media and invitation to attend campaign celebration at conclusion of the campaign

$50,000 – $99,000: “Builders” Same as Benefactors, plus photo of cheque presentation and news release to national media with feature story on your organization

$100,000 – $499,999: “Grand Builders” Same as Builders, plus naming of specific facility or room in the renovated Reception Centre at LPF National Field of Honour

$500,000 – $999,999: “Ambassadors” Same as Builders, plus naming of a street after donor organization in the new section of the Last Post Fund National Field of Honour

$1,000,000+: “Governors” Same as Builders, plus naming of the Reception Centre at National Field of Honour after donor organization

When the Last Post Fund was founded by Mr. Arthur Hair in 1909, he said that “no Veterans should be denied the dignity of a proper funeral and burial” and the Last Post Fund (with your help) will continue into the future to fulfill Mr. Hair’s promise.  In the 103 years since, the Last Post Fund has provided dignified funerals and burials for close to 150,000 Canadian and Allied financially challenged Veterans.

The final chapter of the recognized eligible veterans – the absolute end of an era with the passing of the last WWII and Korean War Veteran over the next few years – will start a new book, The Future, Chapter One, recognizing and embracing the need for the Last Post Fund to be independently self-funding in the future and pursue advocacy to include Modern Day Veterans.

We will always need a diverse, effective and ready military; but with that need today, comes a future obligation – we must always provide adequate reserve provisions to ensure Veterans now and in the future are treated with the utmost care and respect for the duty they provided us.

The purpose of this article is twofold:

R. Brent Lang, CIM FCSI, is active in the fields of finance and philanthropy and recognized as a subject matter specialist in Social Entrepreneurship.  He holds the CIM (Chartered Investment Manager and FCSI (Fellow of the Canadian Securities Institute) and Branch Manager Course designations.  He is past Chair of the Community Impact Fund and Director at a Community Foundation.  He can be reached by email at rbrentlang@gmail.com.