Home | Features | December 13 | The March of the Robots 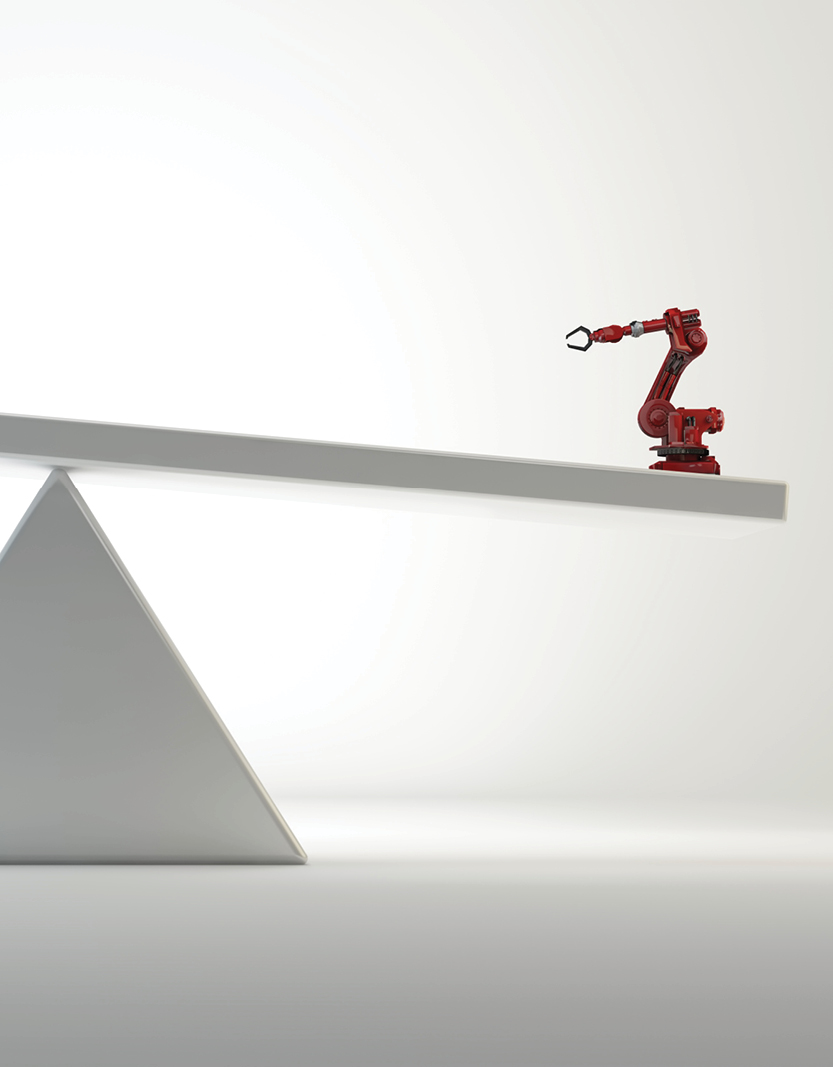 The global economy and the workplace are being reshaped by changes far greater in speed and scale than we have witnessed before.

Workers are competing not only with workers in other countries, but increasingly with intelligent machines.
Cheaper and more user-friendly robots are enabling North American companies to bring back at least some of the production (and jobs) they had outsourced to low-wage countries.

The rapid deployment of robots and automated processes in Chinese factories are displacing jobs in China that were created as a result of outsourcing from industrialized countries.

China will soon be producing higher quality and higher value-added products, posing a growing challenge for North American, European and Japanese businesses that are not used to competing with Chinese firms in the higher-end market segment.

Technology-driven change is impacting multiple businesses and industries simultaneously, transforming the future and nature of work.

The International Federation of Robotics (IFR) estimates there were about 1.5 million industrial robots in operation worldwide at the end of 2012. Japan accounted for 25.0 per cent, North America as a whole 16.0 per cent, Germany 13.1 per cent, South Korea 11.2 per cent and China 7.8 per cent.

The automotive industry is the most important customer of industrial robots, followed by the electrical and electronics, rubber and plastics, metal products, communications, food and beverage, and industrial machinery industries. Manufacturers deploy robots to create leaner and more efficient production operations, reduce costs, and enhance their competitiveness.

Korea had about 400 robots in operation per 10,000 employees in the manufacturing industry, Japan 332 and Germany 273. In Canada and the United States, the number stood at 103 and 145, respectively.

China had only 23 industrial robots per 10,000 employees in manufacturing, but growing labour shortages, the dramatic increase in wages and an increasing unwillingness among the country’s youth to perform manual labour have turned the country into the world’s fastest growing market for robots. One Chinese consumer electronics manufacturer, Foxconn, has announced that it will soon deploy one million robots.

The IFR projects industrial robot sales in China will jump by 65 per cent over the 2012 to 2016 period. Over the same time period, sales of industrial robots are projected to rise 18.0 per cent in North America and 11.6 per cent in Japan. Sales are expected to remain relatively flat in South Korea and Germany.

The rapid deployment of robots and automated processes in Chinese factories will enable China to shift away from low-end manufacturing to higher value-added production. In the coming years, advanced economies will be competing with Chinese firms in the higher-end market segment.

Today, robots are used in a wide set of applications and across many industries, in the goods-producing and service-producing sectors, thanks to falling robot prices and ever-increasing robot performance.

Construction: Robots are deployed in demolition work and they can conduct inspections of buildings, bridges and other structures in place of tethered construction workers.

Energy: Robots are being developed to install and maintain large-scale solar farms. They can scale wind turbines and inspect them, resulting in faster diagnosis and repair and less downtime. Robots can probe and inspect gas transmission pipelines without having to take the line out of service.

Car manufacturers are plotting their own driverless cars. Google is considering using its vehicles to create an autonomous ‘robo-taxi’ service.

Warehousing and distribution: Hundreds of autonomous mobile robots can be found in warehouses locating items in a customer’s order, bringing product shelves to warehouse workers and helping get packed boxes to the final loading dock.

Baxter is Rethink Robotics’ flagship robot. Baxter does not require safety enclosures or special equipment. He is fully mobile and works safely alongside people. Baxter is particularly attractive to small- and medium-sized businesses because he requires no specialized programming or costly engineering work. He can be taught new tasks in as little as 10 minutes. A human worker simply guides the robot’s arms and manipulator fingers through the motions that will be needed for the task. Baxter then memorizes these patterns and can communicate that he has understood its new instructions.

Rethink Robotics estimates there are about 300,000 small-to-medium sized manufacturers in the United States that Baxter would be perfect for.

A Growing Presence in the Workplace

Historically, when new technologies have come along, jobs have been lost, and jobs have been created. The mechanization of farming in the early 20th century, for example, eliminated all but a fraction of farm-related jobs. Yet no one could foresee that over the next century new jobs would be created in factories producing mechanical harvesters and other agricultural machinery, autos and auto parts and consumer electronics, as well as in health care, finance, information technology and hospitality that would employ far more workers than agriculture. Meanwhile, farms have become far more productive, producing higher incomes.

Technological progress enables output to increase over time, quality to improve and prices to come down to the benefit of consumers. Greater competiveness results in increased sales of goods and services, leading to more jobs and higher paying jobs. The ability to produce more enables businesses to enter new markets domestically and internationally, which further increases the overall demand for labour.

A growing number of people are now convinced that this time it is different – technological change is progressing so rapidly that jobs are being automated away in greater numbers than new ones are created. This is because machines are now demonstrating skills they never have had before. Moreover, this is occurring in multiple businesses and industries simultaneously. Displaced workers may not be qualified to fill the new jobs that are being created (for example, in robotics or artificial intelligence). The emergence of new and powerful forms of artificial intelligence may soon put more jobs at risk.

Is any job safe? David Autor, a professor of economics at the Massachusetts Institute of Technology and David Dorn, an assistant professor of economics at the Center for Monetary and Financial Studies in Madrid, argue that individuals that excel in abstract tasks – problem-solving, intuition, persuasion and creativity – have a comparative advantage to robots. These tasks are characteristic of professional, managerial, technical and creative occupations like law, medicine, science, engineering, advertising and design. These jobs typically require a high level of education and analytical capability.

On the other hand, routine task-intensive jobs are susceptible to automation. Robots, for example, can perform repetitive tasks with a high degree of precision and accuracy than humans without getting tired, injured or bored.

Autor and Dorn predict that the middle-skilled jobs that will likely remain beyond the capabilities of robots will be those that are routine yet technical in nature, and require interpersonal interaction, adaptability and problem-solving skills – for example, medical paraprofessionals like radiology technicians and nurse technicians – as well as manual tasks in which workers have a comparative advantage: plumbers, builders, carpenters, electricians, heating, ventilation and air-conditioning installers and automotive technicians. There will also be job opportunities in occupations where interpersonal interaction is important, like physical therapists, personal trainers, coaches and guides.

Going forward, a key challenge for policymakers will be how to best structure our education system so that everyone has a fair shot at thriving in the labor market of the future. The need to retrain workers will pose additional changes for businesses. Workers will need to be retrained – both to work with the new technologies and to learn new tasks and skills as their jobs evolve.

Erik Brynjolfsson and Andrew McAfee sum it up best in their book Race Against The Machine: “Our technologies are racing ahead, but many of our skills and organizations are lagging behind. So it’s urgent that we understand these phenomena, discuss their implications and come up with strategies that allow human workers to race ahead with machines instead of racing against them.”