Home | Features | March 11 | The Maritimes: The canary in the coalmine

The Maritimes: The canary in the coalmine 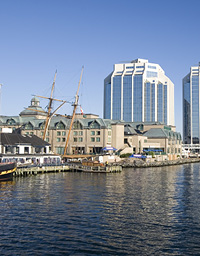 Keep your eyes peeled on the Maritime Provinces. There’s something going on here of significant interest to the rest of the country. And how we deal with it (or not), may set the stage for how other provinces do, too.

Let me first say that the recent recession magnified and accelerated a situation that was already unfolding. We have such a massive government presence, both in terms of the sheer number of people working for government (and the salaries and pension costs that go with it) and in overall government spending as a percentage of our GDP, that we could very well feel more pain when government stops the tap than we did during the actual recession. Like other provinces, the three Maritime Provinces (Nova Scotia, New Brunswick and Prince Edward Island) find themselves staring at deficits for the next few years, at least. Unlike many provinces, all are structural. So, as the saying goes, something’s gotta give.

The backdrop to this is that the recession also exposed vulnerabilities in our manufacturing heartland, requiring significant restructuring in Ontario. Equalization will cushion this restructuring as Ontario enters the realm of the ‘have-nots’.  Consequently, Canadian tax dollars doled out to other ‘have-nots’ (read: us) will necessarily be scaled back. Given that federal transfers account for around 40 per cent of the budgets of Nova Scotia, New Brunswick and Prince Edward Island, it means the dollars flowing from Ottawa to the Martimes will likely be fewer in number.

Enter into this mix the nasty combination of the Maritime’s ageing and stagnant population, coupled with a steady out-migration of youth, and you have a situation where at the very time the demands on public services are growing, our volume of high income earners—and taxpayers—is diminishing. It’s this dynamic that we read about regularly: a story in the local paper outlining steep declines in school enrolment sits beside another detailing the insatiable demand for health care beds.

To recap:  a region overly dependent on costly government programs and people, structural deficits, less money soon to be funneled through equalization and federal transfers, an eroding tax base, and an ageing population with greater demands on costly government services like health care. I could go on, but you get the picture. Ouch.

Don’t think, though, that this picture is unique to the Maritimes. It’s not. An ageing demographic, government largesse and upward pressures on health care are realities we all share. The consequences have hit us first—and likely harder—than it will most other provinces. Sadly, much of the problem is of our own making. For years, Maritime governments have been spending at an outrageous and unsustainable pace, creating programs and expectations on the backs of high personal and corporate tax burdens, particularly in Nova Scotia and Prince Edward Island. This has served to squeeze the private sector, led to severe productivity challenges, while forcing our best and brightest to look elsewhere for opportunity.

For years, the Canadian Federation of Independent Business (CFIB) has warned of the short-sightedness of this approach, begging governments to think of the narrative they’re creating. Make our region more competitive, we urged. Grow the economy. Shrink government to an affordable level. Live within our means. They didn’t listen. And here we are. The question now: what will our governments do?

Predictably, Nova Scotia quickly moved to hike taxes, increasing the HST by two points. New Brunswick put tax relief on hold. Both measures, of course, not only serve to stifle the economic growth we so desperately need, but they also ignore the fact that over-spending, not a shortage of revenues, has created our problems.

The bright side is that at least there’s been broad recognition that expenditures are out-of-whack with our current and future ability to pay. And it seems the real test for clawing our region out of our hole will come this budget cycle. Most provinces have promised austerity measures. The upcoming budgets will test their resolve.

For our part, small business owners in the Maritimes are watching closely. They’ve made it clear that the dynamic that’s been created is unacceptable. It’s no foundation for a bright future—by any measure. We can only hope that our challenges will be a turning point for how we do things in our region; that our dilemma will force a move to smaller government, fewer unaffordable and ineffective government programs, a recalibration of public sector levels and compensation, and a real focus on growing the economy by sending the right tax and regulatory messages in an effort to boost our dismal productivity. Out of crisis comes opportunity.

So keep those eyes peeled. Whether our provincial governments have both the courage and ability to tackle these complex issues with bold moves will likely determine whether yours follows our lead. Or not.