Home | Features | August 13 | The Next Generation of Open Data

The Next Generation of Open Data 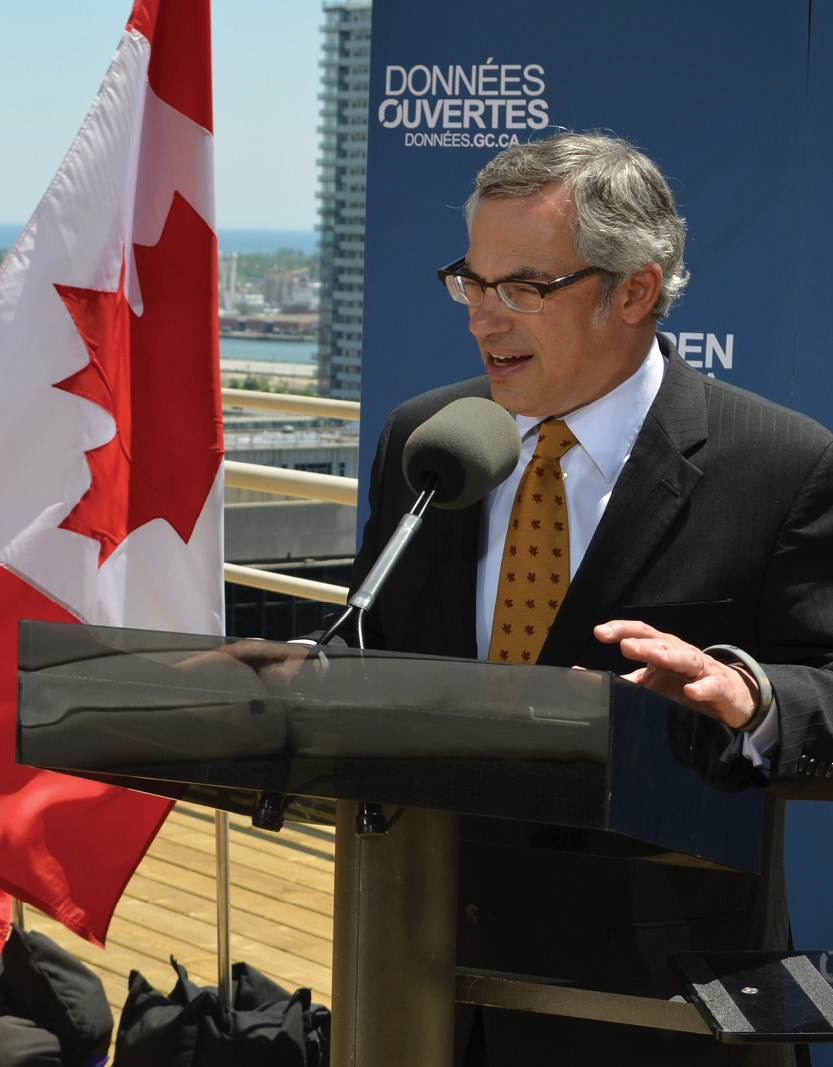 The much-anticipated next-generation Open Data portal, data.gc.ca, is up and running and able to provide Canadians with unprecedented access to government data and information. It’s definitely a strong step forward in the name of transparency. Its ability to open up entrepreneurial opportunities for Canadian business people is limitless.

The announcement of the next generation portal was originally made on the international stage as Prime Minister Stephen Harper spoke of Canada’s support for an international Open Data Charter of Principles while attending the G-8 Leaders Summit in Northern Ireland. The Charter commits Canada to the proactive release of more, high-quality, user-friendly data that is unrestricted in its use and re-use. Back here in Canada, Treasury Board President Tony Clement was on hand at an event for the grand unveiling, hosted at XMG Studio in downtown Toronto on the rooftop of the building.

Founded by CEO Ray Sharma in 2009, XMG is an award-winning developer of mobile games with world-renowned technical, creative and production capabilities in the art of providing original expression through gameplay for all fans of fun. The company has released 18 mobile games in various genres targeting casual game players of which 7 games have in excess of a million installs and several have won Best App Ever industry awards for best in class.

The XMG location at 67 Yonge Street carries with it a lot of history and tradition not commonly known including the fact it was the tallest building in the city and the entire British Empire at 15 storeys when it was constructed in 1905 and at the time was referred to as a “skyscraper”.  You could argue it’s now 15 ½ storeys with XMG having made a beautiful lounge area out on the rooftop area.  The structure was originally built for banking.  Unique to the address in recent years is the number of startup hi-tech companies that have transcended into successful enterprises, including: BumpTop, which Google acquired in 2010; Contagion, which processes one out of every four transactions on Facebook today; Fixmo, which just recently raised $25 million; and Extreme Labs, which was recently acquired by one of the Facebook billionaires.

“People at the time were concerned the building would set off a trend of skyscrapers,” laughs Sharma.  The building is now dwarfed by many larger buildings right nearby.

The launch of data.gc.ca coincided with an event by Minister of Employment and Social Development Jason Kenney in Surrey, B.C., highlighting highly sought-after immigration data that underscores the innovative potential of technology and information.

“Our government is committed to the Open Data movement in Canada and around the world,” says Minister Clement. “Open Data is a global phenomenon that holds incredible opportunity to spur innovation and economic growth and improve the lives of everyday citizens. I encourage all Canadians to explore the potential of this powerful 21st century resource.”

Minister Clement was joined by Robert Herjavec, renowned Canadian entrepreneur and star of the Emmy nominated ABC show, Shark Tank, to showcase data.gc.ca’s new interactive capabilities and Web 2.0 features. Herjavec had also been on CBC’s The Dragons’ Den until last year.  The new website includes new targeted search capabilities and a Developers Corner, where Open Data developers can access specific technical information to assist them in creating user-friendly applications. As part of the launch, Minister Clement also announced plans for a National Open Data Challenge and Appathon using federal datasets, which will take place in the fall.

The federal government is opening access to more government data and allowing entrepreneurs to license its use in the hopes it will encourage them to innovate with profit-making ventures.

Unless there are concerns over issues of national security or privacy, Clement said the government’s default position will now be that data should be open and made available to Canadians in a user-friendly format.

“Open data is Canada’s new natural resource,” Clement says.  “The possibilities for using this data are as infinite as our imaginations. I look forward to seeing what innovative and entrepreneurial Canadians are able to create with this newly accessible information.”

Clement is planning an appathon in the fall that will encourage developers to come up with new and interesting applications for the data that is being made available.

While Clement was handling the unveiling in Toronto, Minister Kenney announced that sought-after data on questions such as application inventories and processing wait times will now be made available.

“Now, we post all of our information online,” notes Kenney. “It’s free, automatically available. I’m sorry to those lawyers, we’ve cut some of their revenue stream, but all that information is free now.”

Herjavec says the access to government data will help level the playing field for small businesses that don’t have the same budgets for data as big corporations.

“When you talk to any Canadian, if they’ve got a mobile device they have a weather app. All the information from that app comes from open data,” Clements provides as an example. “What we want to see are hundreds more examples using Canadian government, provincial government and municipal government data.”

Open data, including Meta types that can be formatted and reused, should not be confused with confidential data.  While there is an effort to become more transparent, any sensitive confidential data will not be made available.

“This Open Data platform has to operate within the law,” Clement advises. “We do have legislative impediments designed to protect our national security and also to protect the privacy of citizens.”

In terms of challenges to set up such a technological interface, Clement says it revolved mostly around usability on the old platform, which was fairly clunky.

The new portal has been crowd-sourced.

“I went out to the community of academics and entrepreneurs and various citizens groups and asked how we can make the portal better,” Clement reflects.

“They provided all sorts of examples, information and suggestions and that’s really what we have now with this new portal. It is very user-friendly. The data is much more available and transparent.”

G8 countries have also made the commitment to spread the movement of Open Data to other countries around the world.  We asked Clement where Canada needs to go from here, not only to keep pace with the other leading countries, but stay at the front of the line.

“I’ll give you some examples of where we need to go,” he began. “The United States has had a couple of appathons already; we’re just launching our first one this fall. Theirs have been very successful and engaging young entrepreneurs into the Open Data movement. Secondly, the licence agreement came out of open source but really was collaboration with India and the UK; they were the leaders in open source licensing. Rather than reinvent the wheel we collaborated with them and came up with something I think is consistent with open source but also meets Canada’s needs as well.”

It was just over a year ago when Clement was in Brasilia at which time he formally registered Canada as a member of the open government partnership, a burgeoning global movement designed to make governments more accessible, more accountable and more transparent.

When the partnership was launched in September 2011 there were just eight member countries. Today there are 55 and growing.

“Open data has gone from being a niche interest to where it is today – a broad mainstream movement for which the world’s leadership has taken up the gauntlet,” Clement states.

“For the longest time information was collected and then stored away like your grandmother’s silverware in some forgotten cupboard to collect dust,” Clement notes. “But as we’ve seen with the rise of digital technology there has been a growing appreciation of the value locked up in that government vault.”

Some of that dusted off information can include such data as air and water quality monitoring across the country to border wait times, information on permanent residency applications, crime stats and vehicle recalls, just to name a few.

“There’s a treasure trove of information for researchers, innovators and entrepreneurs,” Clement says. Geo-spatial data, which is the foundation of popular map and weather apps is believed to have unlocked an estimated $90 billion in value in the United States alone. The European Commission could bring as much as $55 billion in economic benefits to that continent.

“I read an article recently that said the entire amount of data that has been created by humankind until last year will be created in one month starting next year,” Herjavec shares. “If you think about the onslaught of data, it’s incredible. But data in of itself is really meaningless until it’s converted into information.”

“This government launch is giving Canadians access to do with that information what they will,” Herjavec remarks. “I believe that as we go into the future the world will not be divided between the rich and the poor; I think the world will be divided by people who have access to information. I come from a communist country where I was born where all information was horded and controlled by a single source. We see that doesn’t work today. ”

The freedoms and high-quality of life is something Herjavec never takes for granted. He says he learned a lot about life from his father.

“My dad lost his job when we first came to Canada and he didn’t speak any English.  He came home and I told him it’s not that bad, you can apply for unemployment insurance.  My dad looked at me and said ‘I will never take a penny from this country because this country gave me an opportunity and all you deserve in life is an opportunity.’”

There is limitless potential power with Open Data and has become the new raw material of the 21st century. The goal is to make data free and easily accessible while respecting privacy and legislative restrictions.  The new data created is going to be made available by default unless there is a national security reason or privacy issues or legislative impediments that may otherwise require the information to be kept confidential.