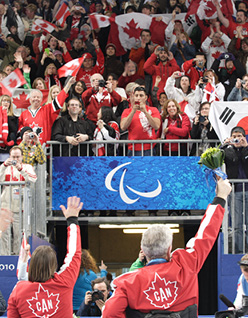 Curling as a business model: The off-ice success of the Canadian Curling Association

Synonymous with Canada, curling is an iconic Canadian pastime, and is one of a privileged few national pastimes that unite a country stretched over 7,300 kilometres from coast to coast.

Curling is played by over 1 million Canadians at least once a year in the country’s 1,000 curling clubs, and about 750,000 play regularly. As a nation, Canada is currently ranked No. 1 in the world for men’s curling and No. 2 for women’s curling by the World Curling Federation, winning gold (men’s) and silver (women’s) in the 2010 Olympic Winter Games and gold in the 2010 Paralympics held in Vancouver.

Despite the limelight shining on our national teams, curling’s greatest success is its grassroots base—the diversity of people who come to the local rinks and curl for the love of the sport, the socializing and exercise. Curling’s accessibility and affordability make it a strong contender as the most popular winter sport in the country.

And it is quickly achieving that level, thanks to the revitalization of curling’s custodian, the Canadian Curling Association (CCA), one of the most successful business stories within the realm of sports.

Sinking into a fiscal hole in the mid-2000’s, the CCA underwent a top down restructuring, adopting a new policy governance model in 2007. From a leadership standpoint, Greg Stremlaw also became the new CEO of the CCA that same year. “Our vision was to truly run the association as a bonafide business entity and focus heavily on the bottom line of the organization,” says Stremlaw. The strategy worked, and is working exceptionally well. In fact, the CCA managed to pay off its entire unfunded deficit by generating the largest single year surplus at that time in 2008—about $1.4 million.

“Over the last several years, the CCA has worked incredibly hard to implement a new corporate governance structure following the key principles established by John Carver for what is known as Policy Governance,” says Stremlaw. “The CCA Board of Governors and management have been successful in this major transition and the way in which the Association is now operated.”

The CCA has only built on its successes since 2007. The CCA has built a new business plan for the organization which uniquely captures the operational objectives of the organization and the strategic actions necessary for the CCA to achieve its ultimate Ends within the governance model. The CCA is now aiming to increase self-generated revenue from 69.2 per cent (from 2010) to at least 75 per cent this year. The achievement of a financial profit is now almost expected as part of the culture that has been created at the CCA, but with the mandate that every dime generated by the CCA is then reinvested back into the sport of curling and achieving the specific sport mandates of the Association.

Stremlaw identifies two key areas the CCA has been able to do from a financial perspective. The first is the creation of a long-term financial reserve fund. The ultimate purpose is to safeguard the organization against future financial jeopardy. This fund, established in 2008, has now grown to a proper level to assist in the mitigation of unforeseen risk factors to the CCA. The second is the newly created curling assistance program (CAP), a fund that is based on the surplus available from the Season of Champions event properties, following the insulation of the long-term reserve fund, eligible for grants that go back to the CCA’s affiliated curling centres in Canada and its Member Associations.

“This year, there is $300,000 available for clubs for business development grants and bricks and mortar grants as part of C.A.P,” says Stremlaw.

Turn on the game

“Ultimately our primary objective is to exclusively promote amateur athletics, specific to curling, in Canada on a nationwide basis,” says Stremlaw.

To achieve this, the CCA has also created an enhanced and exclusive working relationship with TSN which carries more than 260 hours of live television of curling events. In fact, the CCA has just completed a new extension to this broadcast deal which now provides curling with major television stability for the next decade—through 2020. The CCA was also successful in negotiating access to the French language market. To access this key market in Quebec, the CCA also have an exclusive arrangement with RDS, TSN’s sister company in the province of Quebec.

“TV unto itself is one of the big ways we have been able to achieve many of our goals unlike other national sports organizations (NSOs) out there because we have a significant television inventory,” says Stremlaw. “We also own much of the commercial inventory as part of our broadcast and are able to enhance our corporate partnerships and sponsorships across Canada.”

CCA’s corporate inventory of sponsorships has increased significantly over the last number of years. With the global economic downturn, even after the 2010 Winter Olympic Games many sport organizations and businesses in general were and are struggling. Stremlaw cites the value provided through sponsorship television, in-house publications, and web based platform through www.curling.ca as providing enough value to not only retain the CCA existing client base but enabling it to reach out and attract significant new corporate partners “whereby our national supplier and our title sponsor positions for the Season of Champions is virtually sold out.”

Major corporations that align themselves as official partners to the CCA include Ford, Tim Hortons, Kruger Products, M&M Meat Shops, World Financial Group, Dominion Insurance, Capital One, AMJ Campbell, Great Western Brewery, Monsanto and the latest addition to the impressive corporate portfolio is Bell Canada as the official telecommunications partner to the CCA.

“The actual impressions that their brands receive is consistently increasing and I believe that is due to the popularity of the sport,” says Stremlaw, citing that the Tim Hortons Brier in Saskatoon this year is projected to have more than 200,000 spectators in attendance. Other efforts have seen the CCA host the first ever national championship in any sport, summer or winter, in Nunavut back in 2008. This leadership role was not the norm in sport, but since that time, curling in the Territory of Nunavut is flourishing with significant membership increases at the likes of the Iqaluit Curling Club.

The television partnership, in particular, has helped visibility of curling in “a major way”, says Stremlaw. It’s been proven that increased exposure has a direct positive correlation on the sport’s participation, and vice versa.

“It is definitely playing a big role. For example, the 2010 Winter Olympic Games was another springboard for sports in this country but I think curling was already at a high level of viewership,” he says. “For instance, it was great for us to see that of all the Olympic broadcasts on CTV, two out of the Top 5 most viewed events throughout Vancouver 2010 saw the men’s and women’s curling gold medal game, with 7 million and 6.9 million viewers respectively—a true testament of the sport’s massive appeal.”

With major success on and off the sheet, the CCA is an exceptional model to all other sporting organizations, having literally turned a seven figure deficit into a seven figure surplus in the manner of a few years.

The work of the CCA will help go a long way to the sustainability of the sport. According to Stremlaw, “One of the critical goals is that we have to ensure that curling is really the sport of choice for Canadians.”