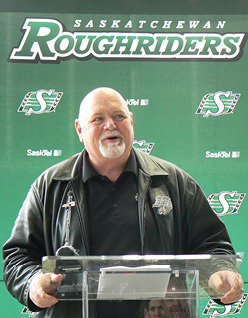 A new stadium agreement between the Province of Saskatchewan, the City of Regina, and the Saskatchewan Roughriders ensures the long-term stability of the Canadian Football League in Saskatchewan.

A new Roughriders stadium will be constructed, with completion targeted for the opening of the 2017 season. Valued at $278 million, the project will be funded through an $80 million provincial grant, as well as a $100 provincial loan to be repaid over 30 years via a $12 ticket surcharge for events held at the new stadium. The remaining commitment will be financed from $73 million in City properties and cash for new infrastructure, in addition to $25 million through the Roughriders’ business revenues, reserves, sponsorships, and stadium naming rights.

Financing arrangements now in place, the project shifts to its design and programming phase. Although the facility will be an open-air stadium, like the current Mosaic Stadium, its design and construction allows for the addition of a roof of dome. It will be a state-of-the-art facility with a capacity for 33,000 spectators.

Jim Hopson, President and CEO of the Saskatchewan Roughriders, spoke with The Canadian Business Journal about the project and what the new stadium means to the local economy.

“It won’t just be another Mosaic, it will be a much different type of stadium,” Hopson described. “We’re now heavily into the planning and design process. We hope to put a shovel in the ground in 2013.”

Initial project discussion dates back to 2007. As Hopson detailed, “It has been a long journey. The Roughriders’ board worked very hard to put together a proposal for extensive renovations to Mosaic Stadium. We presented to the City and the Province, and there was support that something needed to be done, but the cost to do a proper renovation would leave you with much improved amenities and seating, but with an older stadium.”

The board then began investigating costs and the feasibility of a new stadium. The new stadium will be built at Evraz Place, an area directly west of the current stadium that is the sports and economic hub of Regina, neighbouring the Queensbury Convention Centre and the Brandt Centre. Hopson summarized the process, “There have been a lot of moving pieces, but we’ve been able to put together the funding.”

The Economic Council of Regina estimates that the Roughriders generate $75 million a year in economic spinoffs for the province. As the host of next year’s Grey Cup, more than $125 million is expected.

“There are tremendous benefits to the area. We’re also experiencing a surge in growth, population, and business in the province,” Hopson beamed. “It’s the best of times for us, so this will be more good news.”

The Roughriders hope to continue this success long-term in enjoying the economic benefits that a new stadium provides in a gate-driven league.

“We believe our present and our future will be determined by game-day attendance. We have tremendous TV numbers, and we see things improving, but this is about ticket sales and concessions, so we’re making the game day experience as exciting and as fun as possible,” Hopson said. “With the improved seating and sight lines, and various premium areas like restaurants and club seating, we also envision a good number of suites. All of our operations – our store, our football operations, our business operations – will be under one roof to maximize the game day experience and our business opportunities.

“We have a tremendous fan base and we’ve had a very good run the last few years. I think our business success has been the envy of the league in many ways. We now look around the league and see new and improved stadiums, so that’s the bar, and if the Roughriders want continued success into the future, it is very important that we have a facility where we know we can make the business case work.”