The picturesque City of Thunder Bay is located along the northern shoreline of Lake Superior and with a cumulative metropolitan population of 121,000 is the second most populous municipality in Northern Ontario after Greater Sudbury. Now approaching its 50th anniversary, Thunder Bay was created from a merger between Fort William and Port Arthur in 1970.

With a diversified business base, Thunder Bay is the last major city in the northern part of the province with the next large urban centre being Winnipeg, Manitoba 700km to the west.

The CEDC acts as a standalone corporation with core funding from the City of Thunder Bay as well as additional funding from the Province of Ontario, which has been instrumental in assisting with the Entrepreneur Centre, which is for business startups. The CEDC is responsible for business development, retention and expansion, entrepreneurial support and opportunity promotion. It also provides workshop seminars and free, confidential business counselling services to new and existing small businesses.

As the economic development arm for the city, the CEDC works directly with local businesses, which includes existing entities, businesses soon to be moving in and also potential businesses coming in the future. It’s about the promotion of Thunder Bay as an excellent location for companies to do business. This serves both the current enterprises and those who are considering setting up in the city.

“We also put forward programs that the Ontario government has run and perhaps will continue to run with respect to business start-ups and the involvement of students in business programs,” begins Murray. “As of September 1, 2018, we’ve assumed the Tourism department of the City. It has now been separated from the City and is now attached to the CEDC.”

The fundamental reason for moving tourism under the umbrella of the CEDC was due to a change at the provincial level that allows towns and cities to incorporate a Municipal Accommodation Tax. There is now a MAT tax on beds for people who stay less than 30 days in hotels.

As part of the government legislation to collect that tax, 50% of the money collected must be assigned to a not-for-profit tourism entity. Tourism Thunder Bay was a division of the City and as such didn’t qualify as a not-for-profit and that in essence was the primary reason for the shift over to the CEDC.

“This new setup will allow us to work even closer together. Tourism is big here and there are always new businesses coming in to the city,” notes Murray. “It’s a good fit to have tourism with us. We’re just now working through how we can maximize the benefits and synergies of doing that.”

Murray and his team just recently published the new CEDC Strat-Plan, which was put on hold for a year with the transition of the tourism department being implemented. The main tourism information centre is run out of the magnificent Terry Fox Monument and Lookout location just off the main highway.

“We want people to know about our assets and what incredible things are happening here in Thunder Bay,” enthuses Murray.

Thunder Bay faces many of the same opportunities and challenges that you’d expect in other municipalities. Murray believes it is essential to have the right resources and the right people as the city’s demographic ages.

“When I talk with my peers across the province they are all looking at the same situation, with the exception being the GTHA,” he says.

A major focus for the CEDC is engaging today’s youth. The City has two highly-respected two post- secondary institutions – Lakehead University and Confederation College. Between those two institutions the City has attracts an average 3,000 international students each year to study various programs of higher learning.

“We now have a potential labour pool coming in to Thunder Bay and a number of Indigenous people are looking for post-secondary education. We want to get them to complete their education and integrate them into the local economy,” adds Murray.

“Lakehead has been ranked as the No.1 ranked undergraduate research university in the country,” Murray proudly states.

Forestry and the associated pulp & paper companies, manufacturing and shipping through the Port of Thunder Bay such products as grain from western Canada, have provided a great deal of the traditional economic base the city. However, the city has continued to diversify over the years and also has developed a tremendous base in medical and knowledge-based technologies.

“The Conference Board of Canada measures economic diversity. If you are a perfectly diversified economy you score a 1. If you’re a one-trick pony you’d be close to zero. Thunder Bay scores .84,” reveals Murray.

Forestry is still an important facet of Thunder Bay’s direct economy, but with digitalization and changes in technology it is certainly not as prodigious as it once was, but as Murray notes, the city has been able to replace those forestry jobs with employment in other industries.

“Forestry, however, does remain significant for us. We believe there are interesting products that can be made now with biomass from the forest. Resolute Forest Products, which has a large complex here in Thunder Bay, is opening a demonstration plant to manufacture C5 and C6 sugars from forest biomass to be used in the chemical industry,” he explains.

The most substantial sector to have emerged over the last 15 years is healthcare, which represents about 18% of the city’s entire employment base. Thunder Bay is the regional hub for healthcare in northwestern Ontario, which spreads all the way to the Manitoba border and all the way up to Hudson’s Bay and over to James’ Bay. It’s a massive catchment basin and represents almost half of the province geographically and is a landmass larger than France.

“Our trick is to get the proper healthcare coverage, education and entrepreneurship out to those small communities. That is also a focus that we continue to work hard on as a means of making people’s lives better and pull them more into the economy,” says Murray.

“We have the third-largest airport in Ontario in terms of passengers. Toronto has Pearson and Billy Bishop and then there’s Ottawa. After that it’s Thunder Bay. The final numbers will reveal more than 800,000 passengers who went through our airport in 2018. There are 17 flights each day between Toronto and Thunder Bay,” reveals Murray.
Just recently Porter Airlines announced the opening of a maintenance base in Thunder Bay, which will provide another major economic boost not only for the city but the entire region. Murray says Porter’s decision to expand in the City was based largely on a significant pipeline to skilled labour.

“The college can provide graduating aircraft maintenance engineers and there is the flight program. There are a number of synergies with the college. As we look at the whole workforce issue across the country companies are looking at who has pipelines and who can provide training that industry needs,” notes Murray.

Meanwhile, the Port of Thunder Bay continues to be a significant employer in the community, employing about 1,200 people. Grain, coal and potash are just several of many products that move through the port on a regular basis. Other products are offloaded in Thunder Bay and taken to western Canada. About 420 ships came in to the Port of Thunder Bay last year and nearly 30% of those are foreign-flag vessels that may be going on to places such as Milwaukee and Chicago.

“The Port is a huge asset for us. We’re the farthest west on the Canadian side of the St. Lawrence Seaway,” notes Murray.

An important part of the port’s infrastructure in transferring products is through both national railroad companies – CN and CP. The rail infrastructure is a crucial component to success and especially for companies with a significant presence such as Bombardier.

“It’s where they make the bi-level cars for a number of cities. The one that many people would recognize is Go Transit but it’s been made for most major metropolitan locations in North America,” says Murray. “There are also major contracts with the Toronto Transit Commission.”

Numerous local annual events contribute to the city’s local economy, which is strongly supported by the residents. One of the most successful festivals is held in over a three-day weekend in early July called The Blues Fest.

There is always something fun to do in the city just about every weekend throughout the summer. Professional golf tournaments and the Pinty’s Grand Slam of Curling are among the more prominent sporting events that come to town to entertain the local citizens at various points throughout the year.

“As you’d expect, hockey is big here. We probably have the most hockey players in the NHL, per capita, of any city in the country,” adds Murray.

Another incredibly popular attraction is the Thunder Bay Symphony Orchestra, which started in 1960 and performs between October and April in one of the most resplendent facilities you’ll find anywhere in the country.

“We have a beautiful auditorium that was built in the early 1980s and many people have said it has the best acoustics in the country,” says Murray.

In the first weekend in May the Thunder Bay Multicultural Association puts on a festival. About 56 countries are represented from the various residences of people that live in the city. Fort William First Nation also has many cultural events in the summertime. It is definitely easier to plan events throughout the summer although winter lovers certainly enjoy the ski hills with 900-foot vertical drops.

During next year’s 50th anniversary of the city, Thunder Bay will have the honour of hosting the 2020 Special Olympics Canada Winter Games.

Not only is Thunder Bay diversified in its employment base but in its residents as well. At one time the city had the largest concentration of Finnish people outside of Finland and there is still a strong presence to this day. People from India have also been coming to the city in larger numbers in recent years.

“We have a large Indigenous population. According to the latest Census we’re around 15%, which is the highest percentage of Indigenous peoples in a municipality in Canada,” note Murray.

There are two primary initiatives Murray would like to have the CEDC achieve over the next three to five years.

“I’d like to integrate more of all the people that are coming to Thunder Bay into the economy,” he says. “Secondly, Thunder Bay has traditionally been a very blue collar town with forestry and manufacturing. We have a lot of land available on our waterfront that was previously used for industrial purposes. Now we need to convert that to other revenue streams for the city both commercially and residentially to enhance economic development.” 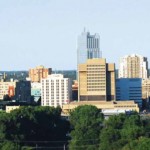