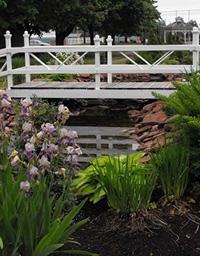 The setting is one of the most pristine views on “this earth of majesty”.  The North Cape lighthouse in Tignish, P.E.I., sits on the northwestern tip of the island, surrounded by red cliffs and the meeting point of the Northumberland Strait and the Gulf of St. Lawrence over the longest natural rock reef in North America. There are also enormous windmills.

It’s the same view that greets visitors to the North Cape Wind Energy Interpretive Centre. Nothing short of dramatic, the centre has been called “an adventure in itself.”  It is used as an educational centre for with hands-on and visual learning tools to teach about the power of wind energy, a vital and renewable resource for the province.

If there is one thing that P.E.I. has in abundance, it’s wind.  According to P.E.I. Premier Robert Ghiz, “Prince Edward Island’s wind energy resource is one of our province’s strongest and most valuable natural assets. Government has set an ambitious goal of increasing the amount of wind energy generated in the province seven-fold over the next five years. By 2013, our goal is to produce 500 megawatts of wind energy.”

North Cape is the ideal setting for the Wind Energy Institute of Canada, a government organization that is seeing Premier Ghiz and P.E.I. reach that goal of 500 megawatts. WEICan is the leader in wind energy research and development in Canada, advancing the resources for the past 25 years. The work here captivates over 60,000 visitors to the interpretive centre every season, and has put Tignish on (a beautiful part of) the map in terms of alternative energy.

The interpretive centre is run by a group called the Tignish Initiative, a non-profit organization dedicated to the development of Tignish. Don’t let its small population mislead you, the 800 citizens of Tignish are very active and engaged in the community, earning it the nickname “the co-op town”. This way of life is embedded in Tignish’s history, starting with the Tignish Fisheries Union being created in 1923 to increase local buying and selling power. The Union then enabled the formation of the Credit Union and the Co-op store, engraining a persevering grassroots and can-do mentality for the community.

This is the vein in which Tignish initiative is born. “As I said, Tignish is known as a co-op town,” says Anne Arsenault, CEO of Tignish Initiatives. “We haven’t had a lot of public infrastructure, so a lot of [community development] has been done by the community coming together and getting things off the ground themselves. There is a real spirit of community and independence and working together to make things happen.“
Tignish Initiatives recently carried out a research project, generating a report looking at economic future in community, and how working with different government departments, community leaders will increase the town’s economic viability in the future. “As long as we keep on top of things we will move forward on our priorities,” says Arsenault.

Depending on the season, Tignish Initiatives employs between 20 and 35 people. Established in 1993, the corporation currently owns some of Tignish’s vital community projects. “The first project was the purchase of a four-storey vacant building which was once a convent for Catholic sisters.”

Tignish Initiatives bought the building in 1993 and began the conversion project, renovating it into a multi-use meeting and accommodation facility named the Tignish Heritage Inn www.tignishheritageinn.ca). Special care was taken in the repairs and restoration, which was recognized by the Board of Governors of the Prince Edward Island Museum and Heritage Foundation with the 1994 Architectural Preservation award.

The Tignish Initiatives office is also found in one of the many building the Initiative has purchased, specifically a closed elementary school that has been into a viable commercial space called the Dalton Annex.

“We now have a beautiful facility here and a number of different clients with offices here (including Access PEI, a Federal MP’s office, Holland College, Department of Fisheries and Ocean, to name a few),” says Arsenault. To think this was once a vacant building left to languish.

Tignish Initiatives is the manifestation of a shared passion and vision. Its collective work over the past decade-and-a-half have injected a sense of pride in a town that has a lot to celebrate, and has built a legacy that will endure.